One of the busiest session musicians in the game, Thundercat has developed into an eccentric, unpredictable artist in his own right 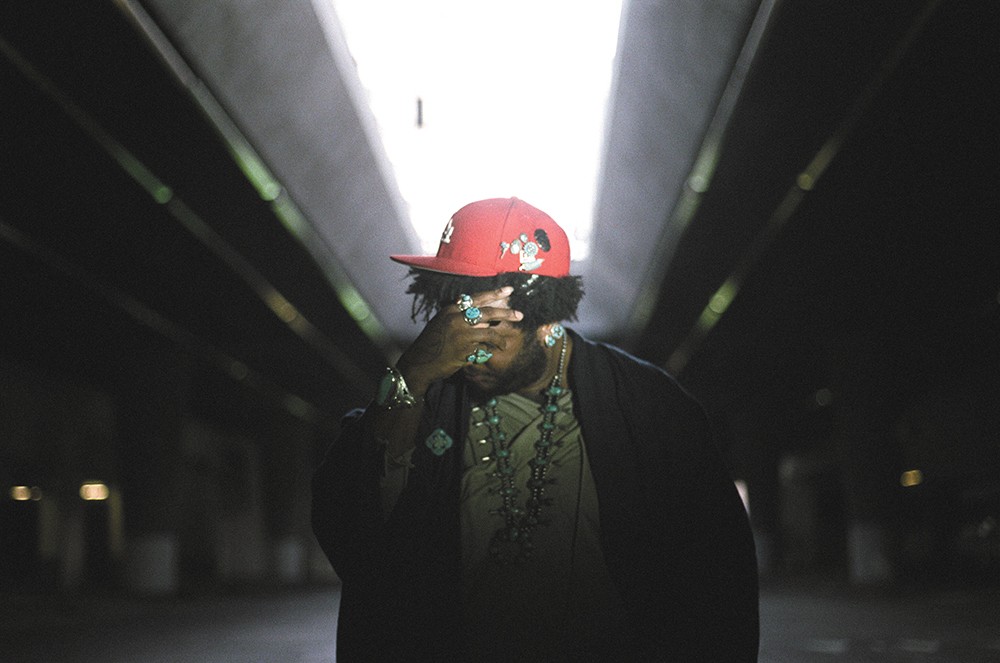 Eddie Alcazar
On tour with his album Drunk, the bass virtuoso known as Thundercat makes his way to the Knitting Factory on Monday.

Equally captivating is his stage presence as a bleary-eyed bass virtuoso who is sometimes trashed, sometimes wearing a knit hat with feathers poking out of the back, or maybe a viking helmet. Who knows? His eccentricities know no bounds. You realize he's a flamboyantly weird combination of the Isley Brothers and Victor Wooten, and you ask yourself: Is this guy for real?

The answer is that Thundercat (real name Stephen Bruner) is about as real as they come. His third solo album — appropriately titled Drunk — is music without pretense; a psyche and soul laid bare through wildly experimental jazz and R&B and the filthiest funk. His lyrics, mixed in with the odd fart noise, swing from scathing social media commentary on "Bus in These Streets" ("Thank God for technology / 'Cause where would we be if we couldn't tweet our thoughts?") to achingly sad admissions on "Them Changes" ("Deep in the cut, drowning in a pain / Somebody help 'cause I can't find my way") and just plain funny stream-of-consciousness on "Captain Stupido."

Considered as a whole, the album has serious ADD. Most of the 23 songs clock in under three minutes, making for a frenetic flow, and feature guest spots from artists as disparate as Kenny Loggins, Kendrick Lamar, Michael McDonald, Pharrell Williams and Wiz Khalifa. What's crazy is that Drunk still feels strangely coherent and accessible. Even so, it's not the sort of album one expects to be met with near-universal critical acclaim, leading to a profile in GQ Style and rave reviews from Billboard, Rolling Stone and Pitchfork. Thanks in part to a renewed mainstream interest in jazz, Thundercat finds himself in an unlikely limelight and on a massive world tour, including Monday night's show at the Knitting Factory.

"Everything's happening really quick; I don't know what the hell's going on," Bruner told the Independent in April as he struggled to comprehend the huge response to Drunk. "I was kinda ... not expecting it."

Previously, Thundercat had been better known for the work he's done with other artists, including a stint in the L.A.-based hardcore punk/thrash metal band Suicidal Tendencies, super-weird collaborations with his studio soulmate Flying Lotus and working as a session musician and producer for Erykah Badu, Kamasi Washington and Kendrick Lamar.

Most notably, Bruner has production credits on Lamar's 2015 opus To Pimp A Butterfly, including the album's ass-shaking single "King Kunta." Bruner's rolling bassline carries the G-funk torch on one of the grooviest West Coast rap songs in recent memory, and like all of Thundercat's music, "King Kunta" is a mash-up of black music history, from the re-sung lyrics of Michael Jackson's "Smooth Criminal" to elements lifted from James Brown's "The Payback."

Thundercat wouldn't be the first to make the leap from session musician to stardom (examples include Glen Campbell, Sheryl Crow and Jimi Hendrix). Actually, as he told Bass Player magazine in 2011, it might have been a long time coming.

"There's a difference between being an artist and a musician, and it's important not to blur that line," he said. "Some artists, like Erykah, encourage me to be more of an artist; when I'm being a sideman, I just play the gig. When it's my time to shine, I'm ready, but it may or may not come."

Now, he's finally receiving attention outside of avant-garde jazz aficionados and bass geeks, though he's still adored in those circles. Interestingly, bass isn't just his instrument of choice, it's also central to his music-making process. As a composer, he uses his six-string as his primary writing tool, and he leans on pedalboard effects to color his funk licks with tones and textures.

"I've recorded everything on bass — the chord structure, the melody, the harmony, and the ambience," he told Bass Player. "Every time I did a take, I'd change the tone. I wanted everything to be as clear as possible, but not recognizable as bass guitar. I took time to do stuff like that, and it has developed into its own thing." ♦