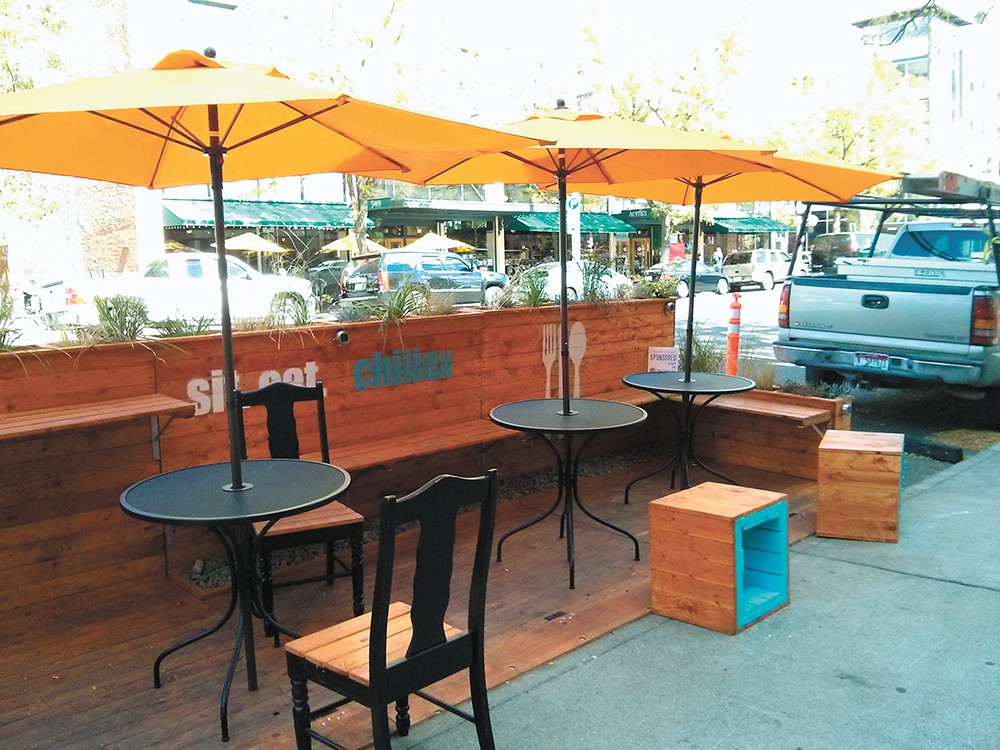 Parklets will be allowed April 1 to Nov. 1. |CHEY SCOTT photo

"It is a simulation-based implicit bias training program, and the first developed for law enforcement," James says. "And we want to know if it's effective at training officers on the street, and more or less effective than traditional classroom training."

James' simulator is an essential part of her research involving 400 patrol officers in the Cleveland police department. The training is happening outside of Spokane because her research called for a more diverse police force and community, James says.

One group of officers in Cleveland will face the simulator's shoot-or-don't-shoot scenarios constructed using 30 years of police use of force data, according to a news release from WSU.

After the simulation, officers will evaluate their own decisions and consider potential biases, says James, a professor in WSU's College of Nursing who focuses on criminal justice research.

"Our goal is for officers to realize it for themselves, and try to recognize their biases in a more natural way," she says.

"There's very little evidence that suggests implicit bias training can affect officers on the street, and we hope to be the first to put a spotlight on that question," James says.

The training and research is funded by a $750,000 grant from the National Institute of Justice, according to a WSU news release. (MITCH RYALS)

You can drive on the street. You can park on it. Or you can take a chunk of that asphalt and turn it into a hip little "parklet."

For three years, Spokane has been testing out PARKLETS — loading zones or two parking spots temporarily transformed into small gathering spaces, often with patio furniture, shade and landscaping that separates themselves from the rest of the street.

In addition, establishments like Nudo Ramen House and Vessel Coffee Roasters have been testing out "streateries," parklet-style spaces that allow drinks and food to be served as well.

On Monday night, the city council unanimously voted to officially write the parklet into city code, with the addition of several new rules: Only one parklet per side of the street is allowed on each block, and they can't impede a bus loading zone.

While anyone can sponsor a parklet, they need to get permission from both the property and the business owners outside the space they want to turn into a parklet. They can only be operated from April 1 to November 1, to ensure they don't impede the path of snowplows.

"It brings vitality to the street life," says Tami Palmquist, associate planner for the city of Spokane. "It gives small businesses another opportunity to expand if they're a streatery. They can provide a little extra seating for more revenue." (DANIEL WALTERS)

Kuney was sworn in to the office on Friday, Sept. 29, about three months after Shelly O'Quinn resigned.

"I have been looking forward to this day," said Commissioner Al French. "Mary is bringing with her a very unique set of skills that will be utilized tremendously as we address the 2018 budget and conduct the business of the county."

The choice was only sent to Gov. Inslee after the two current commissioners, French and Josh Kerns, failed to decide on one of three candidates chosen by the Spokane County Republican Party. The two other candidates were county treasurer Rob Chase and marketing consultant John Guarisco.

In September, French and Kerns announced they could not come to a decision. French noted at the time that libertarian-leaning members of the local Republican Party tried to strong-arm French into voting for Chase, the party's top choice. While Kerns and French could not publicly say which candidate they preferred, party members have said Kerns was leaning towards Chase, and French towards Kuney.

Kuney says she is "humbled and honored" to be appointed to the county commission, and she thanked Inslee for his quick decision.

"I'd like to thank all the people in Spokane County who sent in letters on my behalf, as well as the many elected officials who endorsed me for the appointment," Kuney says.

French expressed relief that the seat has been filled.

"Since we began this process back in July, it has been long and arduous," he said in a statement. "Mary is going to be hitting the ground running." (WILSON CRISCIONE)