Elmer Fudd is still watching out for wabbits — but this time, he’ll be 15 feet tall and surrounded by an entire orchestra. 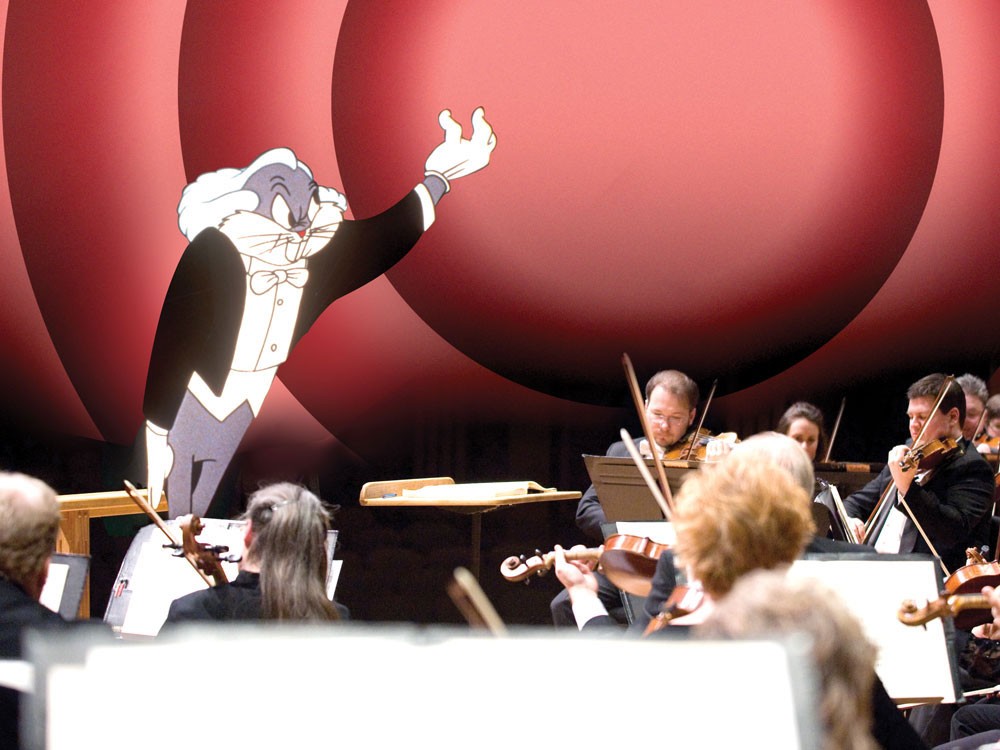 Classical music: snooty and boring. Cartoon music: zany and fun! Like when the xylophone accompanies one of Wile E. Coyote’s screeching stops.

But wait — in the old Warner Bros. animated comedies, classical music and cartoon music were the same thing. “Practically every kid in America got their first dose of classical music from these incredible cartoons,” said George Daugherty in a recent Playbill magazine interview.

Daugherty is the creator of Bugs Bunny at the Symphony. He’ll be conducting the Spokane Symphony this weekend (even if he thinks classical sounds need to be taken in a “dose,” like some kind of medicine).

But you’ve already seen all those old Looney Tunes classics, right? Well, actually, you watched Daffy, Porky and Bugs on an old black-and-white TV with tinny-sounding speakers while stuck at home by yourself, slumped on an old couch in the basement and nibbling cold pizza.

But at the Fox this weekend, they’re going to show Road Runner and Scooby-Doo and the Flintstones on a big screen, and the underscore music will be played by 60 musicians, and you’ll be sitting amid Art Deco elegance, and boy, oh boy, at intermission, did that root beer ever taste good!Some things to watch for as the SSO plays Merrie Melodies while on the screen above them, Bugs is chomping on carrots:

Porky Pig: Prithee, O traveling clown, couldst thou directest me to Robin Hood’s hideout? I wouldst fain join me up with his band of jolly outlaws.

Daffy Duck: Look no further, good friar, for I am he whomst thou seekest. I am Robin Hood!

• “The Rabbit of Seville” begins with shotgun blasts on faraway hills. It’s Elmer chasing after Bugs — who sprints into an opera house and disguises himself as the Barber of Seville. (Guess which bald guy is about to get all lathered up for a “hare-cut.”)

• When the Flintstones appear in “Bedrock Ballet,” listen for the voice of Betty Rubble — supplied by Bea Benaderet (1906-68), known for her recurring roles on Petticoat Junction and The Beverly Hillbillies and as the mother of Coeur d’Alene actor Jack Bannon.

• In “Corny Concerto,” Porky and Goofy go rabbit hunting, and then Daffy swims with swans — all to the music of Vienna waltzes by Johann Strauss.

• “What’s Opera, Doc?” just might be animation director Chuck Jones’s masterpiece: seven minutes of snippets from half a dozen Wagner operas, set amid foreboding castles and steep staircases — and with Siegfried and Brunhilda played by Elmer Fudd and Bugs Bunny.And when you hear the Lone Ranger music (Rossini’s William Tell Overture), you’ll know it’s time for the helter-skelter montage finale.

During Bugs Bunny at the Symphony, graybeards grin at the classical-music in-jokes and giggly youngsters start to associate classical sounds with fun. (When Wile E. Coyote hits the bottom of the canyon, that’s a solo alto flute.)

Everybody loves symphonies when they’re conducted by Bugs.