New parents grab a backpack and hit the trail 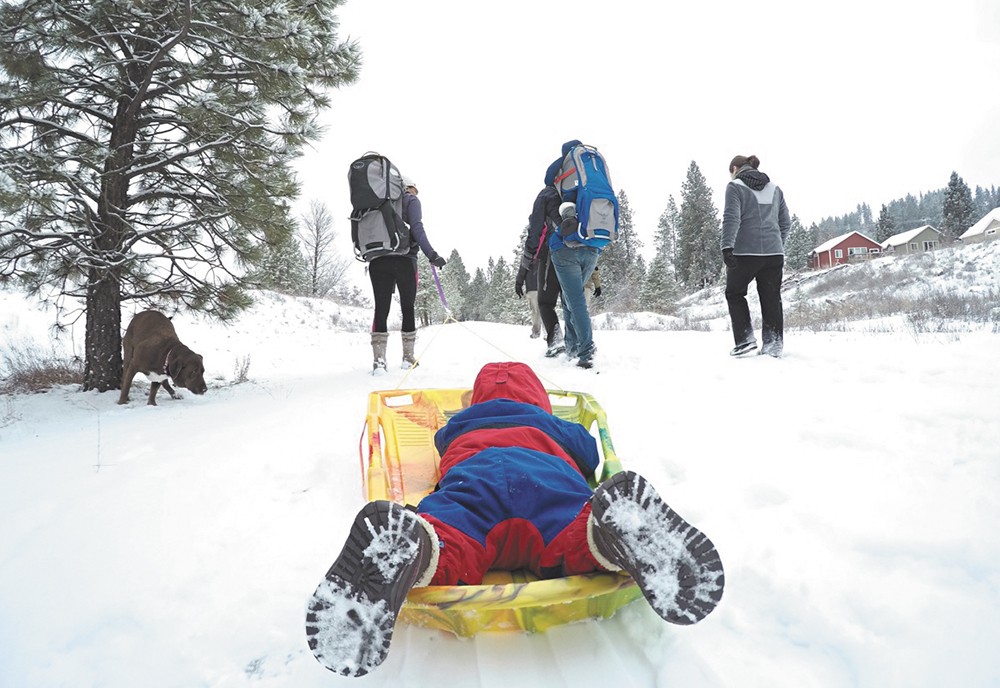 on 2-year old Jack Knudson's blue fleece hat as he bounces in an infant carrier to the rhythm of his dad's trudging cadence. This snowy walk is the first time Jack's mom and dad have joined Spokane's "Hike It Baby" chapter members for a weekly stroll.

Sarah Knudson had been following the "Hike It Baby" Spokane Facebook page for months, and wanted to get out with them.

"But I can't carry Jack in a carrier with my pregnant belly, so this was the first day Tyson and I could both be here."

The group meets every week or two for a walk. Sometimes there are three moms with baby carriers, sometimes five whole families, like today.

Knudson is relishing time with her husband. He's home for two weeks before leaving again for his oil field job in North Dakota, where he'll work another 28 days before coming home again.

But then, nothing about the Knudsons the past few years together has been leisurely.

"We did NOT have our ducks in a row," when we had a baby, Knudson admits. "At the time we met, Tyson and I both had two jobs. I was a teller at a credit union and worked for a professional cleaning service." Sarah picked up an additional job when she became pregnant with Jack. So, although it takes him far from home, her husband took the well-paying job so she could stay home with their children.

"My husband is definitely a guy's man, but when he's here, he's focused on the baby. He reads books and bathes him; he splits all the duties. He's so excited to be a daddy." But Knudson admits when he's gone it can get isolating.

Part of what motivated MaryBeth Bryant to start the "Hike It Baby" group in Spokane was her own unexpected case of "baby blues," which actually took a few months to hit after her son Sully was born.

"I bonded with him right away, and when he was sleeping, I thought 'Hey, this is pretty cool, why don't people say this is doable,' but then my whole lifestyle changed," Bryant explains. "I wasn't getting out and walking, breastfeeding and sleeping didn't come easy for me, and my mostly childless friends didn't invite me to events anymore... I felt like the only mother who didn't have it figured out. I definitely had the 'baby blues' for a while."

Bryant is by no means the only mother

who felt she didn't have it "figured out." In fact, about 80 percent of new moms grapple with insecurity, fear, loneliness or sadness during the first few weeks of new motherhood.

"Once the body releases the placenta and mothers begin lactating, there is a loss of the pregnancy hormones, and women are not sleeping, so they lack the recharge they would be getting from rest," Weaver explains.

In addition to recommending sleep and proper nutrition for recuperation, Weaver says support groups are a forum for truth-telling about struggles.

"The babies and the moms are both transitioning," she explains. "The moms are feeling like: 'Ugh, It used to be so easy to care for you before you were outside my body, I just slept and ate more!' And the newborns are trying to figure out, 'What the hell am I doing out here? Why is it so bright and cold?! And I'm hungry all the time and I have to sit in poop. This is a mess out here, people," Weaver jokes, mentioning that taking yourself and your upset baby less seriously is another tool for surviving tumult.

Hike It Baby insists on having their post-partum meetings among trees and trails.

"We would have liked to get out here right away, but I was recovering from a C-section, so I wasn't as active," explains Caity Selle, who met Bryant at a library storytime group and joined "Hike It Baby" soon after.

"I never had post-partum depression, but for me, it helps to get outside. It's about exercise, but it's also about being around other people who share the same enthusiasm for the outdoors," says Selle.

Her son, Gus, alternates between riding in his dad's baby carrier and being pulled on a blue toboggan along the snowy trail; rosy cheeks all that's visible through his thick, fluffy snowsuit.

"Gus loves being outside, and he loves being around other people," she says, watching him zoom past on the toboggan.

Nurturing a love of the outdoors in Sully is part of what motivates Bryant to keep moving, no matter what the weather.

"I'm surprised by the number of people who wanted to tackle the elements. You kind of have to be committed to outdoors to be willing to do this in the winter," Bryant admits. "At first we worried our babies wouldn't be warm enough, but when we take off their clothes they are usually sweaty, because they get our body warmth, too."

It's a balmy 25 degrees on today's walk, but this loyal group had been out in 10 degrees as well.

While "Hike It Baby" has obvious health

and social benefits, it raises a few flags for Allison Morgan, a certified family therapist.

"I want to stress that moms of newborns clear it with their doctors before exercising," Morgan says, and calls such groups "a wonderful supplement, but should not be considered a replacement" for either therapy, or in cases of severe depression or anxiety, medication.

"And this highlights the myth about depression, that 'You just need to get outside in the fresh air; just go outside and move,' but depression is not a symptom of non-activity," Morgan explains.

"If feelings of sadness go on past two weeks, or if you have frequent crying, feelings of worthlessness, anger, fear, guilt, lack of interest in things you used to enjoy... you need to see a health professional."

Still, Morgan stresses that any group of parents getting together and sharing the whole experience — good and bad — is vital.

"We have this idealized notion of what pregnancy and new motherhood is," she says. "We're supposed to fall in love, and that's just not the case sometimes. No one wants to say 'Hey, I'm not enjoying my baby,' and so they don't."

Morgan estimates 10 to 20 percent of moms have post-partum depression beyond "baby blues," and her suggested course of treatment is similar to other cases of depression: "I would offer coaching on priorities, journaling, trying to get sleep, and creating a support system of like-minded people," she says. And that's where Morgan says she sees groups like "Hike It Baby" making the biggest impact.

"Mothers and fathers need to see that they're not alone," she says, "and that this is a season, and it will pass." ♦