Jenny's Diner opens right across the street from Frank's. Plus, Ferrante's goes deep-dish. 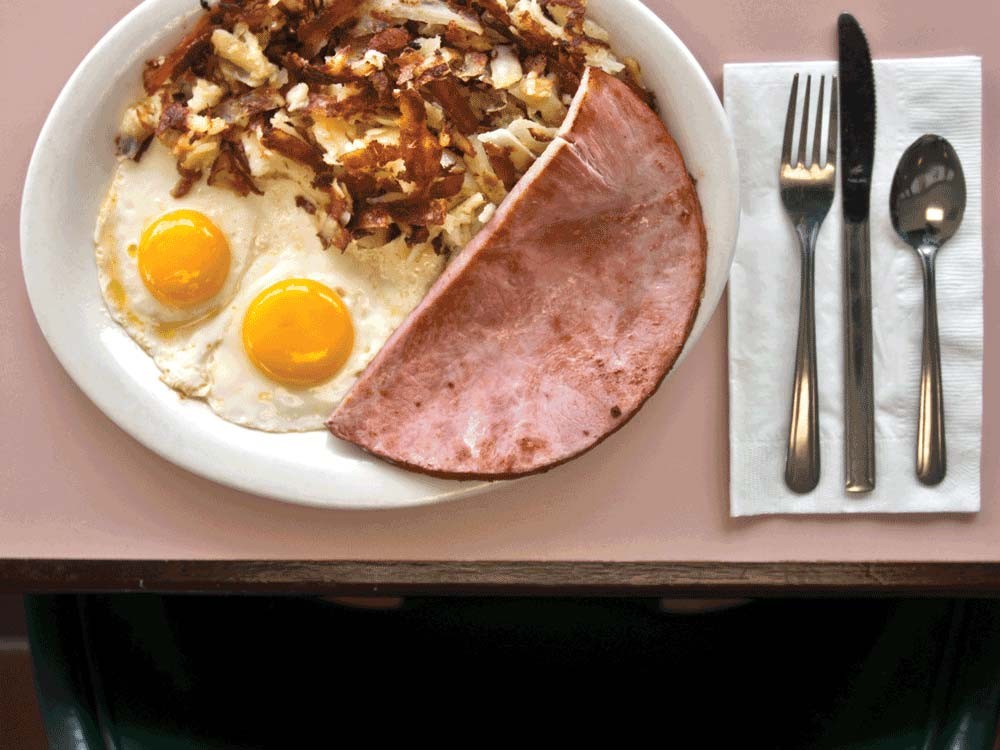 Amy Hunter
A hearty breakfast of ham and eggs at Jenny's Diner.

It's pretty ballsy to open up a diner directly across the street from one of the most popular breakfast joints in Spokane, but that’s just what the folks of Jenny's Diner have done. They aren’t going in unarmed, though. They’ve got Larry Quine.

Quine, whose business faces Frank’s Diner in the west end of downtown, says everybody calls him “the Eggman,” which seems fitting as the Beatles play on the counter-top stereo. In his 30 years as a breakfast cook in the Spokane area, Quine has gained the reputation for preparing eggs any way folks like them. That versatility carries over to other dishes, too.

Quine has put together a menu with classic all-American simplicity. Dishes like Pigs in a Blanket ($7.50), the bacon waffle ($6.95) and two-egg omelets with your choice of bacon, sausage or ham and a side of hash browns and a piece of toast ($5.50). The French toast combo ($7.75), served with an egg and two pieces of bacon or sausage, is a stand-out. Quine grills the thick bread to perfection, leaving the outside crispy and finishing it off with powdered sugar and light butter. Jenny’s also serves a full lunch menu with items like soups, sandwiches and burgers.

It’s basic, but it’s also done right. Quine says he has done his best to keep prices down, and he’s succeeded. Portions are large, and it would be easy to walk out satisfied for under $7. That’s where other places may have trouble stacking up.

“I just figure if you put out a good breakfast, you’ll get everybody,” says Quine.

For years, it was a recipe reserved only for family and close friends. But Tony Ferrante, owner of Ferrante's Marketplace Cafe, has begun to serve his family’s 100-year-old recipe for deep-dish pizza to the public. This pizza is a reason to feel very jealous you weren’t born a Ferrante.

“The basis for this restaurant and everything we do here is traditional family recipes,” says Ferrante. “My grandmother, her generation, they can’t really do the cooking anymore, so those recipes have been passed down in the family.”

Deep-dish pizzas like these have been a standard at Ferrante family gatherings, and after some urging, Ferrante decided to add them to his ever-expanding menu.

Baked in a 12-inch square pan, the pizza arrives out of the kitchen window, barely fitting on the serving plate. The crust is about two inches deep, leaving enough room for the heaping toppings. The Classico ($15.95) is topped with extra virgin olive oil, pesto, plum tomatoes, slices of garlic, fresh basil and parmesan cheese. The crust — which is made from fresh dough mixed up each day — is light and not at all stiff. The Classico is the pizza the Ferrantes have been eating since before they came to America.

There are five options for deep-dish pizzas as of now. There’s the Sausage ($17.95) and the Double Pepperoni ($16.95). The Gusto ($17.95) is piled with Italian meats and cheeses, and the Bianco ($18.95) is topped with garlic cream sauce, grilled sliced chicken, artichoke, purple onion and parmesan cheese. Ferrante says the menu will expand soon.

“We’re going to do the five for now, but we will definitely be adding more varieties as we get more feedback from the customers as to what they like,” he says.

It’s hard to imagine Ferrante getting any negative comments. How many things do you know that are more than 100 years old and still fresh?