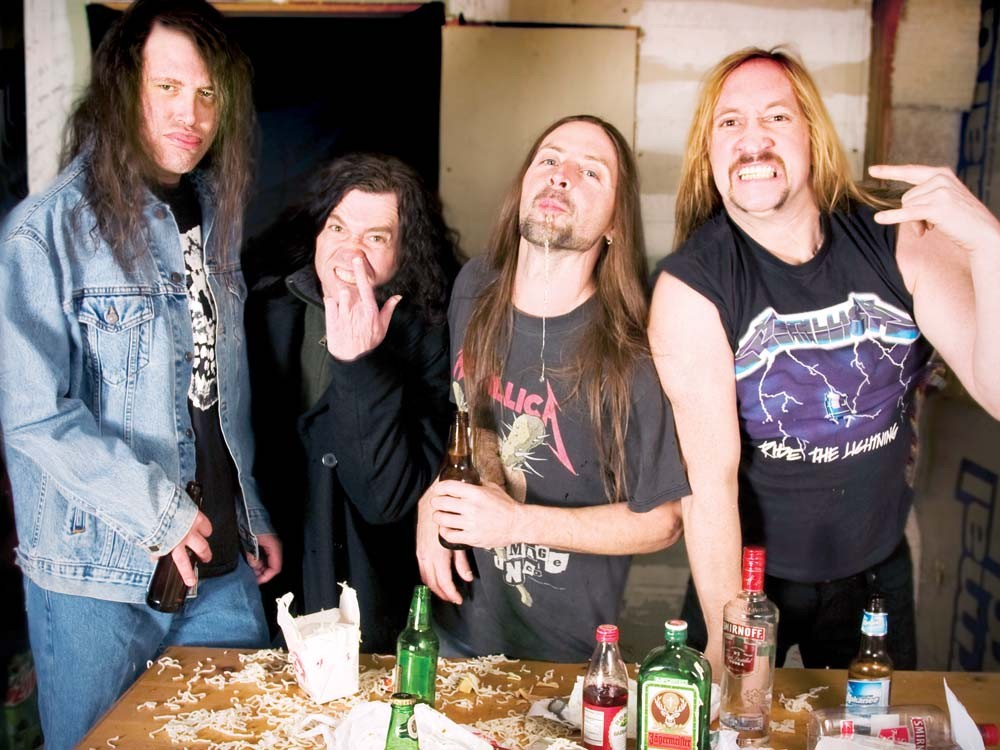 In December of 209, Black the Sky was on stage at the Knitting Factory opening for Hell’s Belles, an immensely popular all-female AC/DC cover band. They played one cover song in a set of originals: “The Thing That Should Not Be,” a Metallica song from the band’s mid-’80s album Master of Puppets.

During that song, the crowd — one they say almost filled the venue to capacity — changed. They sung the words back at them. They went from listening to the band play to participating in the show.

It’s a feeling these four men — now a band called Blistered Earth — wanted to have at every show.

“The feeling of that, whether it’s your song or not, is just killer,” guitarist Ryan Weikleenget says.

“We thought maybe we are doing something wrong because these girls are doing AC/DC and they are really good at it,” says drummer Shawn Murphy. “We were like, ‘We can do that with Metallica stuff.’” When they thought about it, they realized they’d been playing old Metallica songs from Kill ’Em All and Ride the Lightning for decades. They knew Metallica’s music as well as — even better than — they knew their own music. For some of them, those old metal songs were the ones that lured them to pick up a guitar or drumsticks in the first place.

“I was like ‘We should start a Metallica tribute band. We could make mass cash,’” singer Brad Hull says.

And when they realized that they could be a great tribute band, they realized something else: This might be their last chance to make it as musicians.

All four men are in their late 30s or 40s. They have day jobs and kids. And for decades they’ve spent their time in bands writing music and going on tours and playing Tuesday nights in random cities in empty bars across the country — never making money or getting recognition.

“Every one of us has put a lot of time into making original music,” Murphy says. “I don’t know what you have to do to get noticed these days. Everyone has done everything.”

“No record company is going to go — no matter how killer I am onstage — ‘We could go a long way with these guys,’” Hull says.

By July 2010 they had made the jump. They were officially a tribute band. They dyed their hair to look how the members of Metallica — then in their early 20s — did back in the ’80s. They stocked up on the trademark ’80s styles: tight, stretchy jeans; white sneakers. They bought the same guitars that Metallica played.

For this to work, it had to look right. It had to sound right.

It had to be perfect.

In the bottom corner of the downtown Holley Mason office building, floors below a telemarketing company, a cell phone provider, massage therapists and attorneys, the four long-haired members of Blistered Earth explain what it takes to be a good tribute band.

“Number one is you gotta learn the material,” Weikleenget says.

“You’ve gotta like the material,” Hull adds. “I couldn’t be in a Duran Duran tribute band.”

Hull pauses and hesitates — really considering if that’s an option.

“‘Her name is Rio and she dances on the saaaand …’” Murphy sings. And the guys bust up laughing.

“Alright, alright,” Hull laughs. “Everybody has got a price.”

But watching Blistered Earth play, it’s hard to believe that cash is their only motivation. They play Metallica like they are Metallica.

Hull, playing James Hetfield, growls the lyrics to “Fight Fire with Fire” as if he wrote them himself. Bassist Billy Spencer expertly mimics the fingerstyle playing of Metallica’s beloved ex-bassist, Cliff Burton (who died in a bus wreck in 1986). Midway through one of several long, technical solos in “Ride the Lightning,” Weikleenget — his hair dyed black to look like Kirk Hammett’s — makes strained Steve Vai guitar faces as he hits each note flawlessly.

“I felt like Kirk Hammett a couple of times [at our show] in Boise and had to slap myself and be like, ‘You’re Ryan!’” Hull, whose voice is just slightly too high to sound perfectly Hetfield-ish, was even recognized for his playing by Metallica back in the day. After the real Hetfield was burned by pyrotechnics in the early ’90s, Hull — then a member of Seattle’s Forced Entry — got called for an audition with the other members. He was flown to Denver, but he didn’t end up getting the part.

Hull didn’t get to be in Metallica, but today he says mimicking them in Blistered Earth is actually paying off.

“We’ve made money since day one,” he says. “We’ve gotten paid a decent amount for every show we’ve played.”

Blistered Earth — now with only a dozen shows under their belt — conjures songs only from Metallica’s early years: Ride the Lighting, Kill ’Em All, Master of Puppets.

They want to recreate that era of Metallica that meant so much to them. The era that launched so many heavy metal bands. The era that made Murphy rip down his Mtley Cre posters as a kid and learn every nuance of Lars Ulrich’s drum parts.

“A lot of people haven’t been able to see the band in that era,” Murphy says. “It’s a lot different to listen to Metallica on a stereo. It’s a different thing to get your face melted standing in front of the speakers of a band that’s doing it.”

Metallica’s sound changed with 1991’s The Black Album — a record that marked a shift from underground thrash to mainstream, radio metal. Murphy says he doesn’t understand why the band changed or how they could go from writing songs like “The Four Horseman” to putting out St. Anger, a commercial flop.

“They had to know they were going to take a beating for what they did,” he says. “Maybe they really were trying to make an artistic statement. … All the great bands never play it safe. They always change and progress.”

PHOTOS: Give me fuel, Give me fire! Metallica smashes the Spokane Arena