Before launching into winter season, we look back at some of the freshest new musical releases

After crafting two near perfect indie pop albums, Canadian band Alvvays mixes up the formula a bit on its third record, Blue Rev. The group dips into shoegaze territory to create an absolutely massive wall of sound that envelops listeners from the opening moments of "Pharmacist" and never lets up. While it's an awe-inspiring instrumental feat, it does come at a bit of a cost, as singer/guitarist Molly Rankin's sweet vocals and sharp lyrics get a bit buried in the mix (it'd be nigh impossible to decipher them with 100 percent accuracy without a lyrics sheet resting in your lap). But even if you can't make out all the words, the fact remains that few modern bands can come anywhere close to touching the beauty of Alvvays' overall songcraft.

Rap might be thought of as a young man's game, but Open Mike Eagle artfully carves out a spot for the old heads on Component System with the Auto Reverse. The MC's eighth LP has simultaneous footholds in his days growing up mainlining '90s hip-hop (as samples from mixtapes recorded off the radio can attest) and in the current day, blending the colors of nostalgia with clear-headed modern reflection. The whole album's production sports a laid-back summer front porch hang casualness, which makes Open Mike Eagles' rhymes go down incredibly smooth whether he's representing his Chicago roots on "Crenshaw and Homeland" or paying tribute to the late MF DOOM on "For DOOM" ("The news, it knocked it out me like Ronda Rousey / Fool, you're 'bout to sell more masks than Dr. Fauci / I'm copping one off Etsy to rock it proudly / I'm dadbod, Saved by the Bell-y, Kelly Kapowski"). 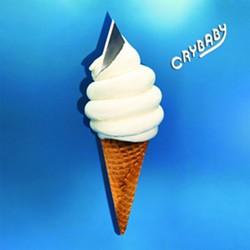 Canadian indie pop duo Tegan and Sara might be in their 40s now, but they're still struggling with adulting. And that's a good thing for their fans. Splitting the difference between the tight indie rock of The Con and the sugary synth-pop of Heartthrob, Crybaby has the singer-songwriters sorting through their arrested development. From the twitchy kinetic electropop of the album opening "I Can't Grow Up" to the rejection of connection on "Smoking Weed Alone," the sisters still have a knack for crafting incredibly catchy angsty jams for those of us who probably wear a bit too much of our hearts on our sleeves.

Entergalactic works in whatever form you consume it. As Kid Cudi's standalone eighth LP, the record leans heavily into the psychedelic side of the MC's signature trip-hop sound. It's easy to let the serene expansive waters of these love songs wash over your senses and get lost in their blissful vibes. But the album also serves as the soundtrack for Cudi's adult-targeted animated rom-com of the same name about two toking artist neighbors finding love. The Netflix film employs an art style similar to Spider-Man: Into the Spider-Verse, and having these Cudi tunes underscore its dreamlike scenes only enhances the product.

When the world seems like an unsteady place, sometimes the best comfort can be found in self-reflection. That's what Stella Donnelly is striving for on her sophomore LP, Flood. The Aussie indie rocker still taps into the buoyant side of herself on songs like the shoulder-shaking disco pop of "Lungs" or the peppy talk-spoken "How Was Your Day?," where she sounds a bit like a cousin of fellow countrywoman Courtney Barnett. But much of Flood finds itself awash in more melancholy musings. The dreamy sway of "Flood" or delicate extreme reverb harmonizing of "Morning Silence" aren't exactly pick-me-ups, but they're gorgeous meditations on dealing with those less cheery thoughts. Donnelly often still boasts a coy sense of humor on the less sunny numbers like "Medals" ("You've got a lot of medals / for someone who is losing"), and ultimately settles into a place of realizing one's own self-worth on the album-closing "Cold," defiantly proclaiming, "You are not big enough for my love."

A lot of us spent time attempting to rekindle our bond with nature during pandemic lockdown times. So did Björk. Written during those isolated times, the Icelandic avant garde pop legend's 10th album attempts to dig its toes into damp soil and reconnect with an earthy universal life force. She's dubbed Fossora her "mushroom album," which feels apt 'cause it often feels like a sonic journey through an underground cave illuminated by the neon colors of bioluminescent fungi. The singer's off-kilter syllabic delivery pairs with crashing synthetic beats, lush woodwinds, and choral backing to create a wonderfully weird soundscape that's still both gorgeous and approachable, as she ruminates about the loss of her mother ("Sorrowful Soil"), moving past trauma ("Victimhood") and more. Humanity might often feel disparate, but just like fungi mycelia, there are connections hidden under the surface that bond us together.

While brevity tends to be preferable in a world cluttered with overlong albums, sprawling exploration can be a virtue when you can feel an authentic and purposeful ambition behind it. This is the case with Wild Pink's latest album ILYSM, which clocks in at over an hour with most tracks running past five minutes. Created in the wake of singer/guitarist John Ross being diagnosed with cancer, the album is an unconstrained ode to the simple and fragile connections of love in our lives. The album boasts a vast, seemingly infinite ceiling of open sonic space, allowing all the ornate instrumental work to shimmer. While it occasionally lyrically touches on Ross' illness, the Brooklyn indie band doesn't dwell on the topic, instead engaging in gorgeous whispered tenderness akin to co-producer Peter Silberman's excellent band the Antlers. When the band fully decides to go all-in, like on the single "ILYSM," things approach Joshua Tree-era U2 levels of bombastic euphoria.

The Danish use the term "hygge" to describe a state of cozy comfort that fosters feelings of well-being. Frankie Cosmos is musical hygge. The New York indie rock outfit led by Greta Kline crafts twee tunes that feel as warm as being piled under a mountain of blankets on a snowed-in winter's day. There's always a childlike wonder in the band's songs, which still feel humble and spiritually lo-fi. The collection on Inner World Peace finds Kline looking inward and examining the state of herself during the waning days of quarantine, while still maintaining the levels of soft melodicism, empathy and care that has become Frankie Cosmos' hallmark.

Stockholm is a far cry from Laurel Canyon, but you wouldn't think that's the case listening to Palomino, the latest album from Swedish folk rock sister duo First Aid Kit. The album is so awash in those '60s and '70s California rock sounds (to the degree that when I read the band was listening to Fleetwood Mac's Rumours while making this record, my only reaction was no f—-ing duh). But this isn't some half-hearted copy job. First Aid Kit nails the Laurel Canyon sound with all its lush instrumentation and gorgeous harmonizing, and even playfully dips into the nostalgia when debating the merits of the Stones versus Gram Parsons ("Wild Horses II"). The record transcends being an homage and instead feels like a forgotten '70s gem finally unearthed after many lost decades.

WHEN I GO I GHOST
CORY BRANAN

Existing somewhere on the spectrum between folk punk and Memphis country rabble-rouser, it's never easy to pin down Cory Branan. If there's a consistency to the singer-songwriter, it's his love for writing songs about the unlucky saps always finding themselves in hardscrabble situations. That remains the case on When I Go I Ghost. There are points where it seems like there might be light at the end of the tunnel, like the rocking "When in Rome, When in Memphis" or "That Look I Lost," with its Southern soul horn blares. But much of the album dwells in a much darker underbelly, characters far too seedy to be immortalized in triumphant outlaw country: "Angel in the Details," the grunge guitar-tones of "When I Leave Here" and the creeping dread-around-the-corner of "Pocket of God." They're hardly the feel-good songs of the fall, but Branan's deft songwriting makes the sinister storytelling feel uncomfortably real. ♦