Spokane Mayor Condon kept sexual harassment allegations quiet until after his election: Now everything is beginning to unravel 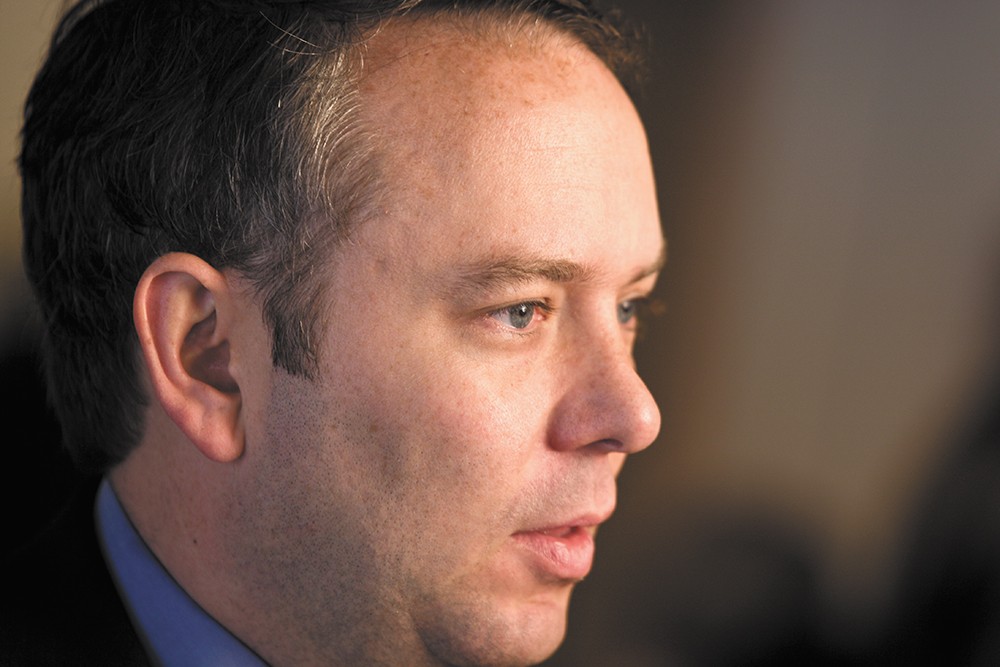 Stephen Schlange photo
Mayor Condon denies he misled the public about a sexual harassment complaint, saying the accuser had asked to keep it secret.

Before it all became public — the ass-grabbing accusations, the $4 million claim and the re-election — it was just David Condon and police spokeswoman Monique Cotton sitting in a small, austere conference room by themselves. No windows, no lawyers, no tape recorders. Just the two of them talking about Cotton's issues with her boss, the city's police chief, according to Bob Dunn, Cotton's high-powered attorney who offered up one of his conference rooms for the conversation.

The one-on-one meeting occurred during the lunch hour just days after an explosive confrontation on March 31 between Police Chief Frank Straub, Cotton and other department leaders. Cotton claimed that Straub had sexually harassed her, but she refused to file a formal sexual harassment complaint, fearing it would trigger a messy public process that would thrust her into the spotlight.

After about an hour, Dunn says, Condon struck a deal: Cotton would get a new job and a raise. Her attorney would get paid. The matter would be kept quiet.

"The mayor, to his credit, agreed to take care of it," Dunn says.

Last week, that backroom deal began to fall apart, as the city finally released public records requested by the media in late summer that reveal for the first time the scope of the complaints against Straub.

The records also stand in stark contrast to public statements by Condon's administration, revealing an active effort by the mayor and his top advisers to mislead the public about the true nature of problems inside the police department.

- Cotton told the mayor and City Administrator Theresa Sanders in April that Straub had "grabbed her ass, tried to kiss her."

- Cotton demanded to be transferred out of the police department, writing to Sanders that "My transfer into a new position has to be viewed as advancement; without any hint that it is for any reason other than as a promotion for my past performance."

- Dunn wrote to City Attorney Nancy Isserlis attempting to collect $13,000 to cover his client's expenses through a reimbursement agreement, in an attempt to keep it out of the public's view.

For his part, Condon says he was caught in a classic case of "whaddayado?" as he tried to keep his promise to Cotton to keep the matter out of the public eye. The result, however, involved the mayor and his top administrators obscuring the truth for months.

"If I gave very specific answers that the public feels were misleading, that was not my intention," said Condon at a press conference on Monday afternoon. "It was my intention to provide the ultimate confidence that the employee had asked for."

Condon also has drawn scrutiny for allowing Straub to remain on the payroll as the city's highest-paid employee, and for possibly violating city policy by not conducting an investigation into Cotton's claims. On Monday, the Spokane City Council sent a letter demanding answers, while the mayor announced that he had appointed a retired judge to investigate.

Meanwhile, a Facebook group approaching 600 members is seeking a recall of Condon, and ethics complaints are being filed against the mayor.

At the time of his one-on-one meeting with Cotton, the mayor had a lot to lose. In 2011, he beat Mayor Mary Verner after calling for a revamp of the police department, its public image having been tarnished as a result of high-profile scandals. Condon then hand-picked Straub as his police chief over the objections of a law enforcement advisory panel — while also sidestepping concerns surrounding his previous performance in Indianapolis.

Before Straub resigned as Indianapolis' public safety director in April 2012, he had promoted Amber Myers, who is now his wife, to the top position in the city's animal control department. Both have said their relationship didn't start until after Straub's resignation. They were engaged by the time they arrived in Spokane that October.

Condon shrugged off the controversy when asked about it in 2012. "To me, it's a personal matter," he told the Spokesman-Review.

It was barely into April — with the May deadline for opponents to file to run against him looming large — when Condon got a call from Dunn.

"I have a client that you want to talk to," Dunn recalls saying. "You've got a serious problem with one of your senior staff members."

Soon, Condon would sit down with Cotton and learn how the man he had hired to bring change to the police department was a potential liability. Condon had been aggressively raising money in hopes of becoming the first Spokane mayor to win a second term in 42 years.

Although the media requested relevant documents in August and again in September, they weren't released until after the November election. Condon says the city saw a spike in records requests in the last quarter of 2015, accounting for the delay. Others don't see it that way.

"This is awfully convenient timing for the release of these documents," says Rick Eichstaedt, executive director of the nonprofit Center for Justice. "It's obviously politically motivated."

Stuckart is more blunt about the timing: "That's bullshit."

Faced with questions about Cotton's move to the parks department and nearly $10,000 raise, the administration stuck with the agreed-upon script. First, Sanders, the city's top administrator, told the Spokesman-Review in August that the bump was an "enticement."

In September, Condon told the Inlander that, no, it wasn't an "enticement," but the raise was to compensate Cotton for additional responsibilities. Sanders later told the Spokesman that the transfer took place because of friction between Straub and Cotton; her conflicting accounts led to an ethics complaint and a $75 fine.

Nevertheless, rumors concerning Straub's relationship with Cotton continued to circulate at City Hall. In mid-September, a citizen emailed the media, alleging an inappropriate relationship between the two. Cotton responded on Sept. 18 with an email to media outlets, saying the rumors were "completely inappropriate, libelous, slanderous, unethical and untrue."

Young Kwak
Frank Straub denies any wrongdoing and has filed a $4 million claim against the city.

That same day, Condon received two letters — one from the executive board of the Spokane Police Lieutenants and Captains Association, the other from leaders within the police department. Both accused Straub of being a foul-mouthed tyrant who yelled at subordinates.

Condon says that when he first heard about the chief's abrasive style, he had a talk with Straub that seemed to solve the problem for the summer. But when it re-emerged and his command staff effectively told Condon that they had no confidence in Straub, the mayor says he decided that the chief had to go. Condon denies that the timing was political, saying, "I could have received those letters anyway and just driven on."

Straub's forced resignation came four days later, on Sept. 22. During a hastily arranged press conference to make the announcement, the Inlander asked if any sexual harassment complaints had been "lodged" against Straub. Condon replied with a terse "No." Condon now says that he didn't intend to mislead with his answer, and spokesman Brian Coddington says that Condon's answer was truthful because the mayor was referring to formal complaints.

In the days following Straub's ouster, Coddington actively sought to deter the Inlander from looking into the rumored issues, calling a reporter a "gossip columnist" for asking to speak with Cotton about them.

"Monique's move to parks was strictly managerial," he said then. "End of story."

Coddington also took the unusual step of calling the Inlander's publisher to complain about reporters' questions.

"I'm not going to comment on this," said Coddington last week when asked if he still considered the issues between Straub and Cotton to be "gossip."

Straub followed up his resignation with a $4 million legal claim alleging that his due process rights were violated. Mary Schultz, Straub's attorney, denies the allegations facing Straub and says the city never bothered to find out if any of the complaints were true.

"The reality is that Frank Straub requested investigations, and those were refused," Schultz says. "When anyone is accused of anything, and particularly in this case, there should be an investigation."

On Monday, Condon defended his decisions to reporters who had gathered on the top floor at City Hall. He also announced that the city would hire retired federal Judge Michael Hogan to review policies surrounding employee complaints and how well the administration followed them.

Condon explained that he had a difficult balancing act to perform. A reporter later asked him what he would do if his daughter was sexually harassed. Condon responded that this wasn't about his daughter, this was about a grown woman.

The city didn't conduct a formal investigation into the matter, he said, because Cotton wouldn't take the first step of filing a formal complaint and refused to cooperate with an inquiry. Condon also wondered if it was a good idea for the city to investigate every complaint, formal or otherwise, because doing so could have a chilling effect on public employees who might instead choose silence over a potentially public investigation.

But Mike Love, a local attorney who specializes in employment law, says that Condon can't fall back on Cotton's request for secrecy.

"Regardless of whether Ms. Cotton wanted to file a formal complaint or not, city policy and the law still obligated them to launch a prompt and remedial investigation," Love says by email. "Because of the pressure internal investigators face and the serious nature of these allegations, the city should have hired an experienced, outside investigator to perform a thorough factual investigation. I am also troubled by what appears to be the former chief being involved in the reassignment of Ms. Cotton. That should have never happened."

Councilwoman Karen Stratton, a Condon foe who worked for the city for 10 years, says that the city's Human Resources department should have been brought in to deal with the situation, and is troubled that Straub was left in his position for months without those accusations ever being resolved.

"The minute they knew about those allegations it needed to be investigated, whether [Cotton] wanted it or not," she says. "The fact that they left him in that position with females under him is a disgrace."

More than half a year after Cotton made allegations of sexual assault, she remains employed at the city, managing communications for the revitalization of Riverfront Park.

"My goal has never been to profit from this terrible situation and to date I have not filed a claim for damages," she says in a statement to the Inlander. "Rather, I am trying to survive these awful circumstances, maintain my employment and continue to productively contribute to the City of Spokane."

Although Cotton is now paid more, her attorney says all this attention is exactly what she didn't want to happen. When asked if it could be avoided, Dunn says, "If you hire somebody into a key position who has a history of misconduct, it's pretty simple: you don't hire the person." ♦

Edgar Martinez inducted into Hall of Fame, Hope House to break ground on new site this fall, and other headlines