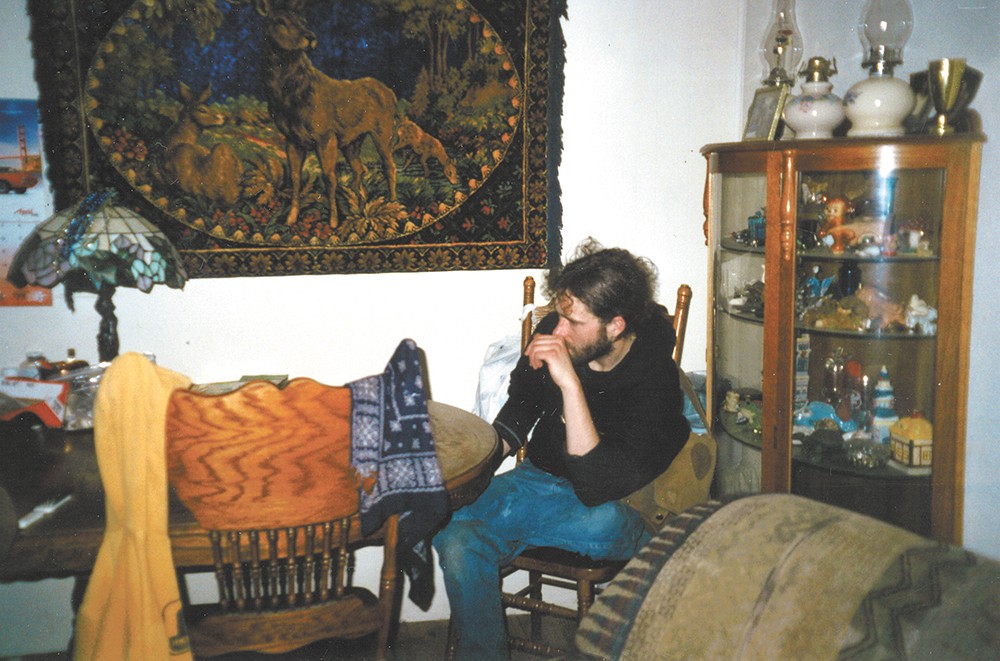 A recent photo of Alexander Maier at his father's home.

They've been sitting on his living room table since the funeral. One is from his mother, the others from family friends. His name is scrawled in elegant cursive across the fronts. He opens the first, and several locks of curly dark hair slide out. He gasps slightly.

Alexander Maier died by suicide in early May of this year while confined in Eastern State Hospital in Medical Lake. Nothing has been written about his death, aside from a two-line funeral announcement in the Spokesman-Review. The state Department of Social and Health Services has been tight-lipped — declining even to confirm if anyone had committed suicide in one of its facilities when first contacted in May — citing health care privacy laws.

The Inlander first learned of Alexander's death through an anonymous tip and later confirmed it through a police report. The Spokane County Medical Examiner has ruled Alexander's death a suicide, but his father is still searching for answers.

For Alexander, 34, his final moments came in a familiar place. Harry Maier says his son cycled in and out of the state psychiatric hospital for the better part of a decade. He visited Alexander there about once a week.

For the state of Washington, Alexander's death occurs under the watch of a woefully underfunded and, according to some attorneys, grossly mismanaged mental health system.

"They way they let people out of there, it's impossible for them to be successful," says Harry Maier. He believes his son's condition was often exacerbated after a stay at Eastern State Hospital.

The night before Alexander died,

his dad paid him a visit. Harry Maier doesn't remember many specifics about their conversation, but he does remember saying goodbye. As he was leaving the hospital, he recalls Alexander shouting after him.

The next morning, Alexander was pronounced dead, according to police records.

Around 7:40 that morning, Kevin Houle, a nurse, told police he saw Alexander walking in the hallway wrapped in a blanket. His behavior seemed normal.

By 8 am, Houle realized that Alexander was missing and began searching for him. At room No. 148, which was being remodeled and was locked, Houle saw a knotted sheet sticking out from the top of the door. Alexander's body fell to the floor when Houle opened it.

Hospital staff retrieved a plastic phone card from Alexander's pocket, which Houle suspected he used to unlock the door. According to the police report, Houle was aware that a plastic card slid between the door jamb and the door could open the lock. He told police that patients were aware of this as well. 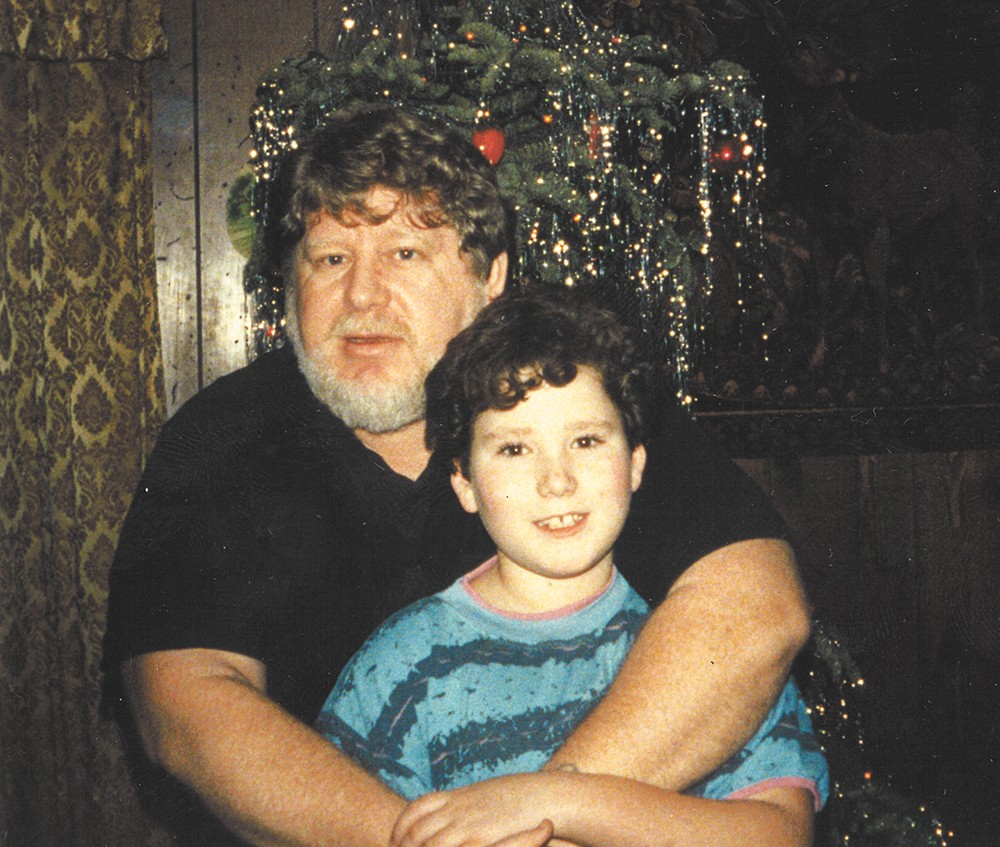 A family photo taken during the holidays when Alexander was a child.

It's unclear how long Alexander had spent in Eastern State Hospital leading up to his death, because civil commitment files are not publicly available. However, his most recent criminal case in Spokane County was resolved in 2014, according to court records. In that case, Alexander faced assault charges stemming from a scuffle with a nurse at Sacred Heart Medical Center. Those charges were dismissed after a judge ruled Alexander was incompetent to stand trial and was "unlikely to become competent ... at any time in the foreseeable future," according to court documents.

After a death in the state psychiatric hospitals, DSHS conducts a risk analysis to see if policy and practices need to be updated. The hospital completed an analysis after Alexander's death, but the report is exempt from public disclosure, according to state law.

"Eastern State Hospital continuously evaluates processes related to the treatment of patients entrusted to our care," DSHS spokeswoman Norah West says via email, though she couldn't say whether any policies had been changed in light of Alexander's death. "The safety and security of patients is our first priority. ... In the past year, multiple construction projects have been completed to maintain a safe environment for patients."

Months after his son's death, Harry Maier is still in pain.

ruled that the amount of time inmates languished in jails waiting for space at state psychiatric hospitals for evaluation and treatment was unconstitutional. U.S. District Judge Marsha Pechman gave DSHS, which runs both state hospitals, nine months to comply with the Washington state law that says inmates are to wait no longer than seven days for a psychiatric evaluation. In some cases, defendants waited in jails for months.

The nine-month deadline passed in January. The state hospitals have made some progress — wait times for inpatient evaluations have dropped from an average of 91.8 days to 12.5 days at Eastern State Hospital, for example — but the problem persists. In July, Pechman found DSHS in contempt of her ruling and imposed a per person, per day fine: $500 for each person who's waited more than seven, but less than 14 days, and $1,000 for each person who's waited more than 14. Individual state judges have also held the state in contempt of orders for evaluation or treatment. Those fines totaled about $1.5 million by early July.

"DSHS has had the opportunity to fix this problem on its own for years," Emily Cooper, an attorney with Disability Rights Washington, says in a statement after the ruling. "Instead of listening to the Court Monitor or its own experts, DSHS has continued to waste money and time on unproven solutions." Cooper was one of the attorneys who brought the lawsuit leading to Pechman's decision.

Wait times for those accused of crimes aren't the only problems facing these DSHS-run facilities. A 2012 investigation by Seattle public radio station KUOW found that over the previous decade, a dozen people committed suicide in Western State Hospital in Lakewood, the largest psychiatric facility in the state.

In 2014, the state also settled a wrongful death lawsuit for $500,000 brought on behalf of a man strangled to death by a woman in Eastern State Hospital.

And earlier this year, the state settled another wrongful death suit for $360,000 after a man died from an alleged assault at Eastern State Hospital. In that case, Misael Rodriguez, 43, was found bleeding and unconscious in a bathroom. DSHS denies that an assault took place, according to news reports, and Rodriguez's death certificate says he died of "pneumonia secondary to another illness or serious injury." However, hospital staff did not call the police for about four hours after Rodriguez was found. By that time he was taken to the hospital and the bathroom had been cleaned up.

Eastern State Hospital is still facing at least two lawsuits. One alleges that a nurse abused patients and retaliated against other employees when they reported her. The other claims patients' civil rights are violated by restrictions on "restorative trips," which can include going to McDonald's for lunch or leaving the facility for a walk outside.

Andrew Biviano, the attorney in both of those suits, says they are currently in settlement talks "designed to help give the hospital more tools to exercise clinical judgment free from political meddling." Restrictions on patients leaving the facility indicate a punitive, rather than therapeutic approach, he adds.

"People are agitated and more aggressive. There are more assaults against staff and other patients," he says of a 2010 law restricting patients from leaving the facility. "It's a toxic mix. Someone needs to get in there and release that pressure valve for staff and administration. They need help."

Alexander was an artist.

At the bottom of a half-oval china cabinet, Harry Maier retrieves two drawings — one of a knight on a horse, the other of Uncle Sam. The glass case also holds sculptures Alexander made as a kid.

As Harry Maier flips through a family photo album, memories rush back. There's one of Alexander standing proudly in front of a piece of artwork hanging on the wall at school. And there's one of him rocking out with a red guitar. The album also holds pictures of birthdays, Christmases and summer days spent in the pool. Alexander is always smiling.

Then Harry Maier flips to a more recent photo. Alexander, 27 at the time, is standing by his mother near the Greyhound station. His hair is longer and he has a full beard and a comparatively sullen expression.

He points back to a time when his son's troubles first began. Alexander dropped out of Shadle High School after his junior year. He and some buddies got into drugs. He lived on the streets for a while. At about age 20, Harry Maier says, his son was a completely different person — constantly anxious, withdrawn and at times angry.

Those conditions worsened at the hospital, Harry Maier says, based on his interactions with his son.

"It was like they were torturing him in there," he says. "I don't understand why they're punishing people with mental illnesses." ♦