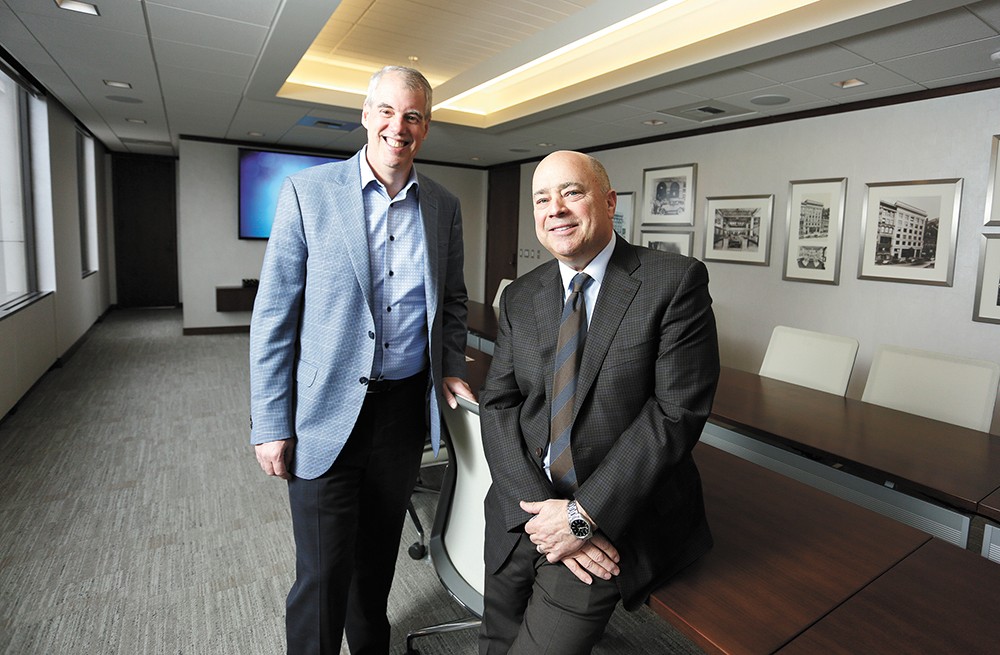 Back at the turn of the 20th century, Spokane was a city on the rise, transitioning from pioneer outpost to an economic center powered by mining, timber, railroads and agriculture. One local, Grier Long, wanted the world to know little old Spokane was open for business — he even fought to change the provincial sounding Mill Street to the Wall Street we know today. Long co-founded the Washington Trust Company in 1902, and it's still a beloved local institution all these years later.

About 15 years after Washington Trust opened, Spokane's E.H. Stanton sold his meat-packing operation to Armour out of Chicago, and the family parlayed the proceeds into the banking business. The family has controlled Washington Trust ever since, with their great-grandson Peter Stanton serving as the CEO since 1982.

"The early 1900s were a boom-and-bust time," says Stanton. "The story goes that my great-grandfather, like a lot of people then, could make a substantial amount of money in one activity and then would lose it all in the next venture. I guess my great-grandmother Cora got tired of the wild economic swings and wanted to invest in something more solid, like banking."

Their operation has grown far beyond what E.H. and Cora could have envisioned. "When I worked at Rainier Bank in Seattle [before moving back to Spokane], they were a fairly large bank," recalls Stanton. "I think they had something like $2 billion in assets. Our size was around $350 million then, and it took us 80 years to get there. I never thought I'd see us at $1 billion in my lifetime."

Today Washington Trust has $6.5 billion in assets, with another $5 billion in their wealth management division; it's the largest bank headquartered in Washington state and does business in Oregon and Idaho as well.

"All this success radiates from Pete and his family," says Jack Heath, who started working at the bank in the eighth grade and has been WTB's president since 2000. "They're quiet leaders in the community. They believe in building really strong relationships. They believe in making a difference."

The bank's growth in recent decades has been remarkable, especially since national banks have gone on a consolidation binge and trust has been eroded by scandals like the mortgage crisis. How did Washington Trust weather those storms?

"I've got to give most of the credit to our outstanding employees and being a privately held company, and not publicly traded and bogged down in short-term thinking," says Stanton. "It allowed us to grow organically, not by mergers and acquisitions. It creates such a difference in our outlook and our culture. We're also a very human place. The people who work here and who bank with us are my friends and neighbors."

"During the last downturn, when people were under a lot of pressure, we were there for them as their bank," adds Heath. "It's easy when things are going great, but when times are tough, that's where you really differentiate who you are and what you can do."

Both leaders give credit to their team, pointing out that decisions are made here and not in some San Francisco boardroom.

All that gives Spokane some much-needed financial firepower as it continues its growth spurt.

"Our region is scaling at an amazing rate," says Heath. "This is a game-changing time for how Spokane and North Idaho are going to be positioned for the long term."

"It's really nice to see Spokane coming into its own," adds Stanton. "It's about time."