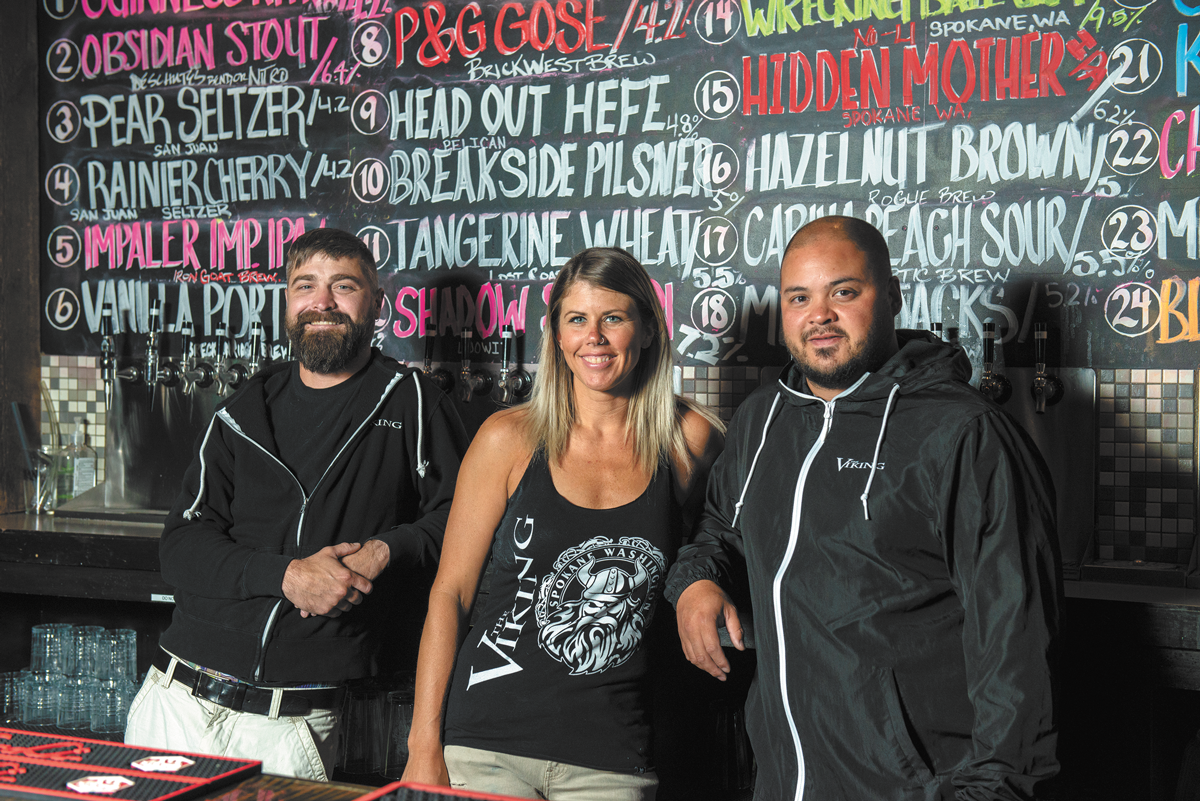 The Viking is a Spokane staple. In operation since the '80s, the Arena-adjacent pub was one of the first to bring craft and imported beer to town. It continues to live up to that legacy today with 24 taps of microbrews, cider, seltzer and even kombucha.

There have been multiple iterations of the Viking throughout the decades. Its current form took shape in 2017 after several months of renovations by business partners Greg Healy, Krista Christofferson and Steven Barclay.

"We kind of cleaned everything up, but we kept a lot of the same charm," Barclay says. "We didn't want to lose what the Viking was."

Their connection to the nearly 40-year-old pub goes well beyond the last four years, though. Barclay has been the general manager of the Viking for eight years, and Christofferson has worked there even longer. In that time, Barclay says they've met a lot of people who have been patrons since long before they were involved.

"There's people that still come in and see us who have been here for decades," he says.

Barclay describes the Viking as a gathering place with multiple functions. He calls it the perfect lunch spot for people who want to get in and out quickly. He says happy hour is greeted by a lot of regulars who like to meet up with friends or family. Then there's the location. With it being near the Spokane Arena, the upcoming indoor sports complex and soon-to-be downtown stadium, Barclay says "it's been a place to pre-funk."

While the Viking has evolved over the years into a place with great food and craft cocktails, beer remains the cornerstone of the bar. And, when it comes to selection, Barclay believes the Viking has a little of something for everyone. From dark beer to IPAs to lagers, the tap list is dominated by regional and local breweries.

"It's one of Spokane's original microbeer bars," Barclay says. "So we always want to make sure we have a great rotating selection of beers on tap."

With COVID-19 restrictions fully lifted, Barclay says the business is nearly 100 percent back to normal. He is currently planning a beer dinner event featuring speciality kegs he has been holding on to.

The pub is also preparing for its first major event in more than a year. The All Age Rage is set for the last weekend of August. The annual outdoor concert is based around supporting all things local. A lineup of local music will be paired with tons of local beer on tap. Stay tuned for details.

The original print version of this article was headlined "Best Bar for Beer: THE VIKING"