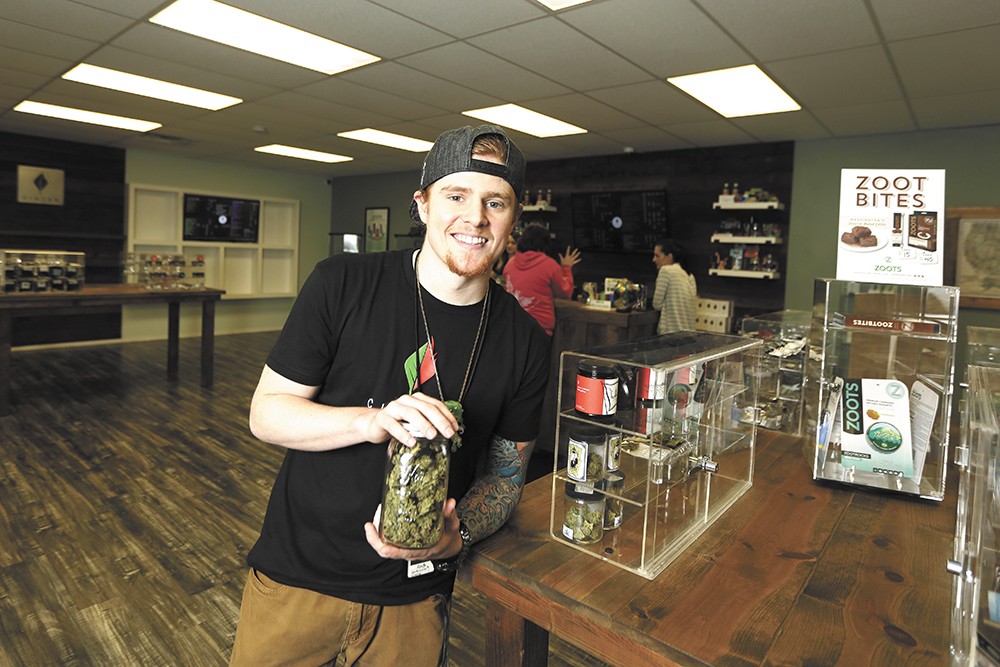 Zack Krogh has worked in the marijuana industry

for less than a year, but he's a natural, and his career has evolved as much as the industry itself.

While working as a bartender, Krogh applied for positions at local marijuana shops. After making a few connections, he exchanged the "bar" for "bud" and began working as a budtender at Cinder's Division location in July of last year.

In January, Krogh, 23, was promoted to supervisor.

His interest in the industry began long before his career did.

"I was one of the people on the forefront signing those silly little petitions," he says. "I was always pro-legalization."

Krogh started pursuing a career in the marijuana industry, coincidentally, after he received a possession charge. He was caught smoking weed in his Eastern Washington University dorm room in the not-so-sweet spot between when voters approved legalizing marijuana and when the legislation was signed into law.

Despite the rough beginnings, Krogh is happy with his job.

His favorite part of working at Cinder is helping "little old lad[ies]" who come into the shop looking to get high for the first time, something he says happens more and more every day.

"The cultural stigma is dropping and people are more willing to come dip a toe in," he says.

No matter the consumer's age, Krogh tries his best to help each customer achieve the high they're looking for.

"If it's giggly, you get them with the sativa," he says. "If it's more 'I want to go melt into the couch and watch TV,' then I'd give them an indica."

His knowledge of strains is impressive, yet he's able to break things down so even the greenest smoker can understand what they're getting into, which his customers appreciate.

Case in point: During our interview, a budtender came into the office and told Krogh that a customer was requesting him specifically.

Being chosen as Spokane's best budtender means a lot to Krogh, and he's using the title as motivation to accomplish even more, for himself and for Cinder.

"I went from budtender to supervisor pretty quick, and I just hope to keep pushing," he says. "I hope to see Cinder as the future Starbucks of recreational cannabis. It has to happen eventually, so we're trying to set the standard for the experience."