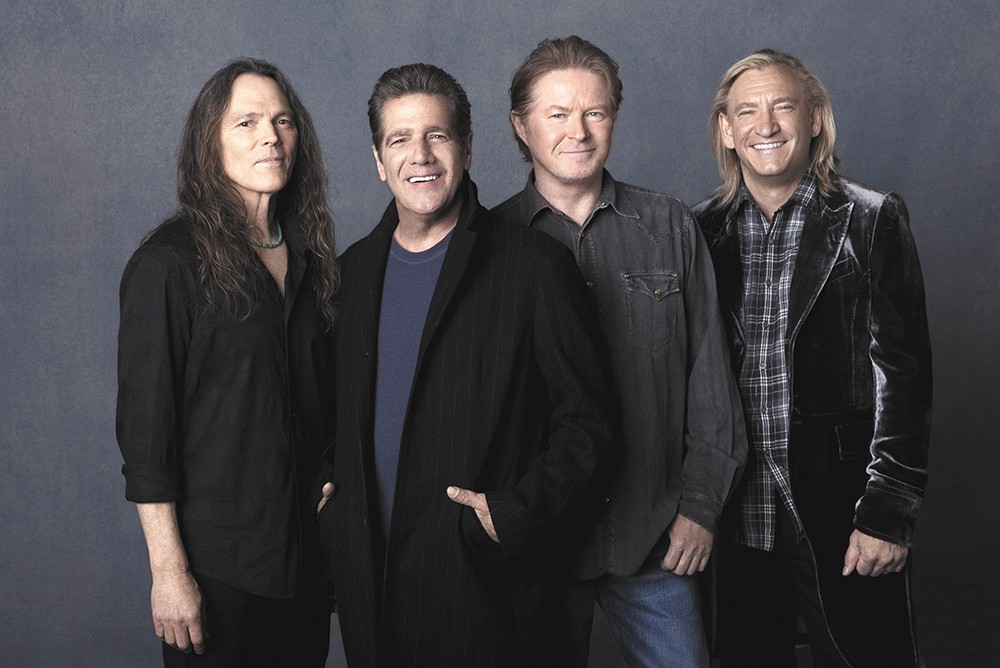 The Eagles played for more than three hours to a sold-out crowd.

a promotion asking Spokane music fans to think big and create a list of who they'd like to see perform at the Arena.

More than 10,000 responses later, the Bucket List was complete, with pop singer Pink, country star Luke Bryan, and the Boss himself, Bruce Springsteen, topping the list.

Just outside of the top 10, sandwiched between Bruno Mars and Green Day at a solid 13 ("Lucky 13," marketing manager Becca Watters says) was legendary rock band the Eagles.

"Spokane is such a classic rock town, and the Eagles are such a big legacy group, and they're so great live," Watters says. "I wasn't super surprised that they were that high on the list."

Who would be? With more than 150 million records sold, the Eagles are one of the world's best-selling bands of all time. Their decades-long career has spawned more than two dozen singles, seven studio albums and 10 compilation albums of enough hits, deep cuts and rare live performances to last a lifetime.

The folks at the Arena heard Eagles fans loud and clear and booked the band as part of the Arena's 20th anniversary season.

The sold-out May 29 show found Glenn Frey (who passed away in January), Don Henley, Joe Walsh, Timothy B. Schmit and Bernie Leadon splitting their illustrious career into two sets.

The first paid homage to the band's country-tinged beginnings with songs like "Peaceful Easy Feeling," "Witchy Woman" and "Take It to the Limit." After a short break, the band opened the second set with ballads "Pretty Maids All in a Row" and "I Can't Tell You Why" before showing the crowd that they still knew how to rock, playing songs like "Heartache Tonight," "Life's Been Good" and a cover of the James Gang's "Funk #49."

After nearly three-and-a-half hours, the Eagles went out strong with an encore of fan favorites "Hotel California" and "Take It Easy."

For Watters, this success of this show, the Eagles' first in Spokane since 2002, was just proof of Spokane's dedication to classic rock.

"People in this town respond so well to what we bring to town," she says.

Previous: Best of the Arts
Next: Best Local Play/Musical of 2015-16