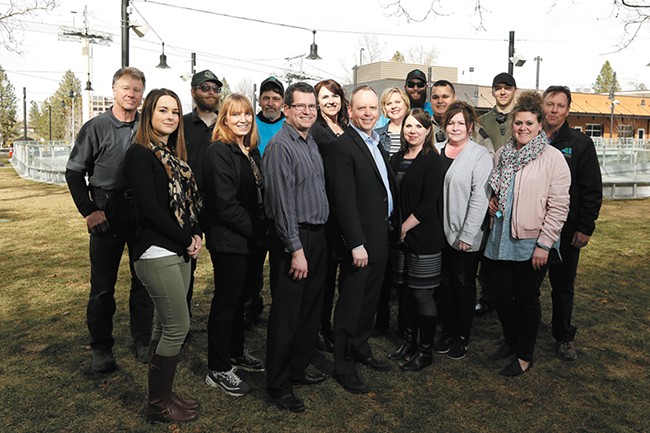 The amusement park rides are gone,

at least for now. The Ferris wheel will be turned to scrap. The IMAX has been demolished. But those were never the true attractions of Riverfront Park anyway.

It wasn't even the historic Looff Carrousel that gives Riverfront Park its magic — though there are few feats as heroic as a child as standing up on a horse (or giraffe) holding onto the pole, leaning, and then triumphantly coming away with a golden ring in their hands.

No, the wonder of Riverfront Park isn't anything you have to pay admission for. That's what's so cool about it.

It's standing with your kids on the bridge overlooking the thundering Spokane Falls during a spring runoff, shrieking and giggling with them as the spray surges up onto the bridge, soaking the whole family.

It's that first time that you tell your son, "See that statue of the metal goat? Go grab that candy wrapper over there on the grass." And then you hit the button and watch his eyes go wide as the goat statue sucks the garbage out of his hand.

Or, it's something as simple as seeing the kids watch the ducks and the geese. The kids gawk. The ducks quack. The parents relax.

And then the kids get older. They start running through the park on the Centennial Trail with their high school cross-country team. They go on walks through the park with their crushes — if they're daring, they might even climb the Harold Balazs lantern sculpture to see the inscription at the top. One of them even proposes in front of the garbage-eating goat.

It seemed like just yesterday, you think, that the kids were sliding down the giant red wagon.

Forty-four years ago, the alchemy of Expo '74 transmuted the rust and railyard into the sprawling meadows and gorgeous sculptures surrounding roaring waterfalls. The 6-year-old who stared up in wonder at the grandeur of the World's Fair is 50 now. She has her own kid. Her own kid might have her own kid.

The park is changing, of course. The $64.3 million bond is already transforming the park, resulting in a new ice-skating ribbon, a new carrousel building and — soon — an upgraded pavilion.

But traditions remain. Every winter vacation, whether it's an ice palace or an ice ribbon, your whole family goes ice skating at Riverfront. All three generations.

The original print version of this article was headlined "RIVERFRONT PARK"