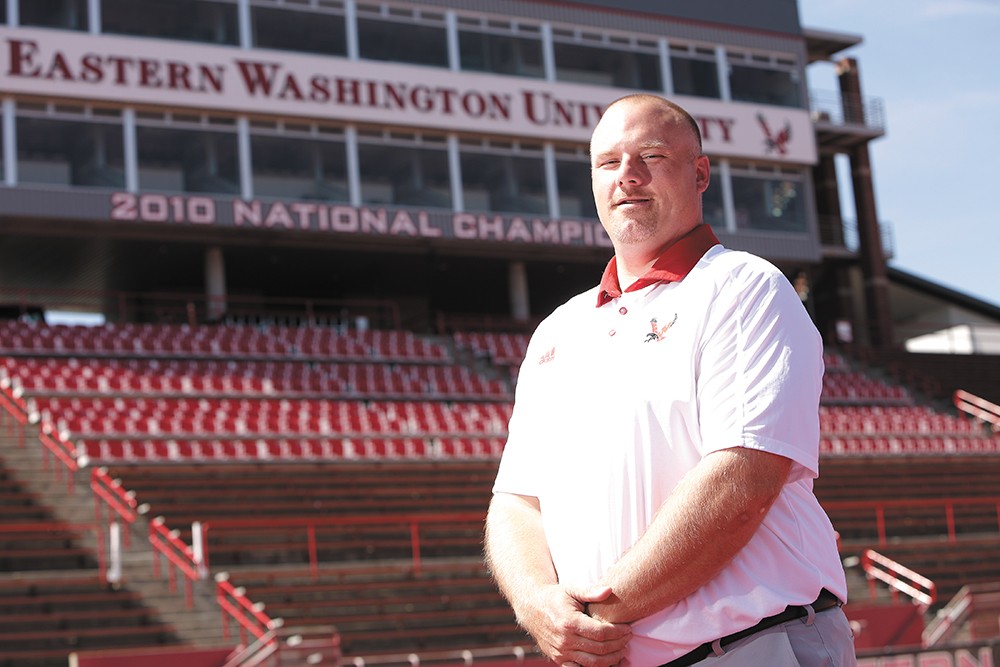 Stepping into the Eastern Washington head football coach position after 16 years as an Eagles assistant and four years as an offensive lineman on the team, Best knows intimately how the program has gone from plucky upstart to powerhouse.

"Is it harder to rebuild, or is it harder to stay on top of the mountain?" Best muses before a recent Eagles practice, considering the position he's in at his first head coaching job. "Just because you're not rebuilding doesn't mean it's a small task. When you're following arguably the most successful coach in Eastern Washington history — with a lot of respect to a few of the coaches that came before Beau Baldwin — that's a huge challenge in itself, because you've gotta keep them on top of the mountain."

In many ways, the 39-year-old Tacoma native was born for this job

leading young men onto the Inferno turf of EWU's Roos Field. His path to the gig started as a player wanting to use his talent for blocking to get an education. And that path took him to Cheney.

He never got the chance, but he did have the choice. After earning his degree and starting a master's program, Eastern's offensive-line coach quit and Best was offered the job by former coach Paul Wulff. "I could follow my ambitions and do the high school thing, go back to the Westside and see a bunch of brake lights every day and a bunch of rain, as I was falling in love with the opportunity to coach the offensive line here," Best says. "I was at a good crossroads, where I got to decide one or the other."

Taking the college-ball road led Best to becoming coach of an often-dominating offensive line, a group that has produced more than a dozen All-Americans during his time at the helm. The evolution from lineman to line coach to head coach is a common one, given linemen's often-cerebral approach to an often-brutal game.

"When you get in front of an audience of 105 [as a head coach], it's not like I'm audience-shy, because you've been in those situations. You get battle-tested in the offensive-line room, believe me. You need to be on your P's and Q's for sure." 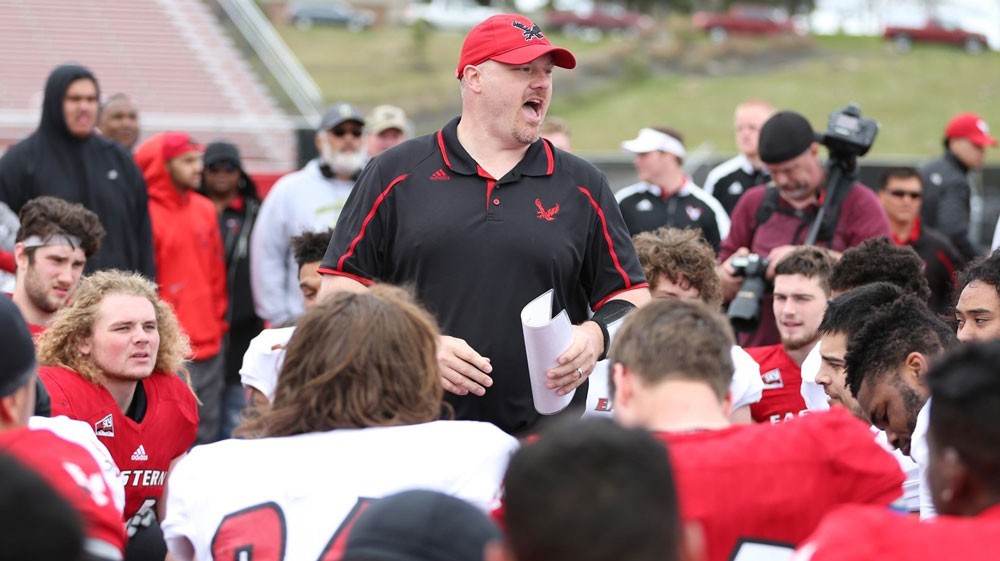 EWU Athletics
Aaron Best has been a presence at EWU since playing at an All-American level as a college lineman.

in January to become offensive coordinator at Cal, Best says the assistants on the team all had the same thought. "If our boss leaves, what's the plan for us?"

Within a few hours Best got his answer: He and defensive coordinator Jeff Schmedding were named co-interim coaches, allowing the Eagles to complete their recruiting period.

"It really was one of those situations where there wasn't any practice or hours preparing," Best says. "You get told your boss is leaving, then within six or eight hours you're told you're going to be co-head coach. It's kind of like becoming a parent all of a sudden, but you don't have the nine months to prepare. You've got one day."

After interviewing both interim candidates for the job, Best was named head coach on Jan. 21 and jumped right in. While his experience as an assistant helped the transition, Best says that becoming a head coach is one of those things you're never truly prepared for.

between Best and former coach Baldwin. Junior linebacker Ketner Kupp says "the philosophy has been the same, but the approach is a little different. I wouldn't say it's 'hard-nosed' with Coach Best, but it's definitely been a little more direct with him."

All-American quarterback Gage Gubrud says that when players first heard Baldwin was leaving, there was naturally talk about the team's future. When Best was hired, though, life as an Eagles student-athlete went right back to feeling "normal."

"The practice style is a little different, we're a little more up-tempo," Gubrud says. "Coach Best is also around everything a little bit more. He's around the defense, the special teams and offense about the same. Coach Baldwin was more of an offensive head coach. Coach Best, you see him kind of chiming in on everything."

That hands-on approach to the team should serve Best in maintaining the family vibe he's always felt at Eastern — including starting his own family after marrying Kim Walker 10 years ago; the couple has three kids who've grown up in Cheney. When the Eagles travel to New York City to face Fordham next month, he's going to get the players to Times Square and 9/11 Ground Zero, because "some of these kids will never be back there, so why not experience those things?"

Juggling his role as leader of a football team and husband/father of a household is just one more new challenge for the Eags' head coach. And while he's seen mentors successfully navigate those roles, Best clearly has his priorities right as he enters season one:

"I'm going to try and not allow my being a head coach be an excuse for why I can't get home for dinner, or why I can't be at certain events, because the last time I checked, I was a parent before I was a head coach." ♦