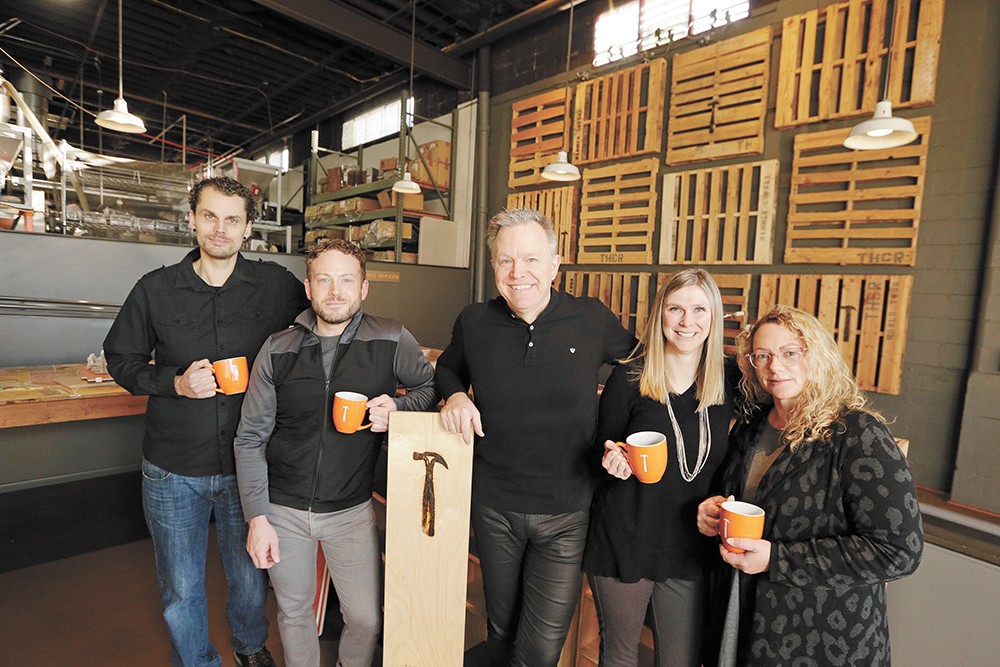 During the late '80s, Thomas Hammer got a job at the mobile coffee bar outside Nordstrom in downtown Spokane.

"There were only, like, four espresso machines in Spokane at the time," he says, "so it was really cutting edge."

Back then, Hammer was still a teenager preparing to study business at Gonzaga University. His parents suggested that he might be better off with a different job. But he was too much in thrall to that hard-to-define quality that all high schoolers yearn for: coolness.

After a few years, he was hired by Nordstrom's coffee supplier, 4 Seasons, and launched a coffee bar in the back of what's now Atticus Coffee and Gifts.

"The owners gave us a lot of freedom to experiment," Hammer says, and he seized that opportunity to learn how to roast while pursuing his second degree from GU, an MBA. "I liked the idea of controlling the quality from the roasted coffee down to the cup."

Before long, another opportunity arose. This one involved a vacancy left by a coffee franchise in NorthTown Mall. With help from his longtime strategic partner Bud Barnes, Hammer took over their former space and equipment. That more or less marked the birth of Thomas Hammer Coffee.

"We almost went bankrupt a couple of times," he chuckles. "Usually, when you have an MBA and you open a business, bankruptcy isn't supposed to happen. But we learned from our mistakes. After a couple years of up and down sales, we finally got our groove on."

"And then one store started to follow the next. And the next."

Guided by the notion of being a "junior Starbucks" with proud local roots, Hammer soon went all-in on distinctive visual branding that capitalized on his surname. "I lucked out that it looks pretty good in print," he jokes.

He hired executive staff with the chops to help the operation grow. Locations spread across the Inland Northwest, as did the reputation for quality roasts and top-notch customer service.

These days, Thomas Hammer Coffee has 20 stores between Boise and Fairchild Air Force Base. At least two new locations are scheduled to open this summer. Though there are far more than four espresso machines in Spokane by this point, Hammer says they've been able to stand out in an increasingly competitive field by maintaining a hip public face while being serious about consistency.

Speaking of Best Of 2020 , Thomas Hammer