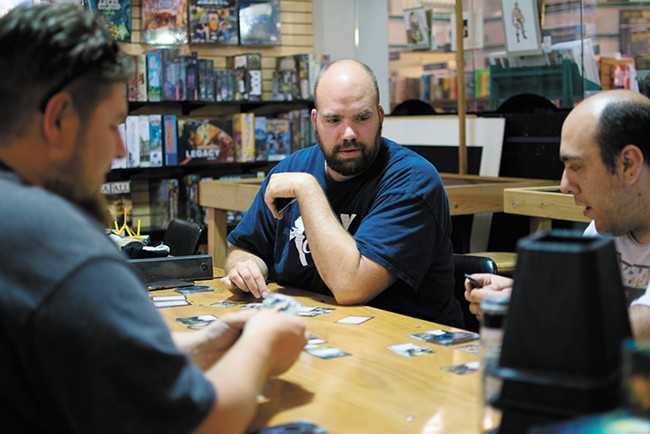 to play on game night, a couple booster packs of Magic: The Gathering, or another Y-Wing for your Star Wars: X-Wing squad, Uncle's Games' two Spokane locations have you covered.

For more than four decades, Uncle's has been serving the local community's needs for gaming fun of all types. While the online retailer-which-shall-not-be-named has certainly added another layer of convenience and (sometimes) savings in the tabletop gaming industry, online shoppers won't get recommendations from an actual person who knows games in and out, as Uncle's' staff do, its two Spokane store managers say.

"I feel like we put a lot of effort into trying to add a lot of value for our customers when they come into the store, and that takes on a variety of forms," says Kyle Kemble, Uncle's downtown store manager and a partner in ownership of the Spokane-based chain. In addition to locations in downtown Spokane and at the Spokane Valley Mall, Uncle's has stores in Bellevue, Redmond and Tacoma.

"We have a lot of demo games, and one thing we try hard to do is give people space to play — that really takes on the form of organized events to play and win prizes, but also people who want to play a game on their lunch breaks downtown or at the [Valley] mall," Kemble continues.

"The awesome part of that is you go to the schools and talk to parents and kids, and they come back to the store," says Valley store manager Jackson Wesley. "It's great for our business, but gives us a chance to connect with them, too."

Both of Uncle's Spokane-area stores offer many of the same products and in-store events (that schedule is always posted on its website, unclesgames.com), but the locally owned company is also able to tweak these services to meet the niche needs of customers at each location, Kemble says.

For example, the Valley store hosts regular Dungeons & Dragons gaming groups, including one for parents and kids, while the downtown store has a well-established group of players who regularly come by to play the various strategy games made by Fantasy Flight Games, including the popular Star Wars: X-Wing miniatures game, among other titles.

Perhaps one of the best perks of stopping into Uncle's is the chance to test drive a game you're considering adding to your own collection. Both stores stock a diverse inventory of demo copies, and its employees are happy to share their deep knowledge and love for a variety of board and card games.

"It's a lot of fun, and when you share what you love with people having a good time, it makes for good days," Kemble says. "I love seeing people learn and becoming friends. I think that is the huge benefit of working in the game store, being part of various communities of gamers... and getting to know people. It allows for a level of connection and interaction you don't find in other jobs."

The original print version of this article was headlined "UNCLE'S GAMES"