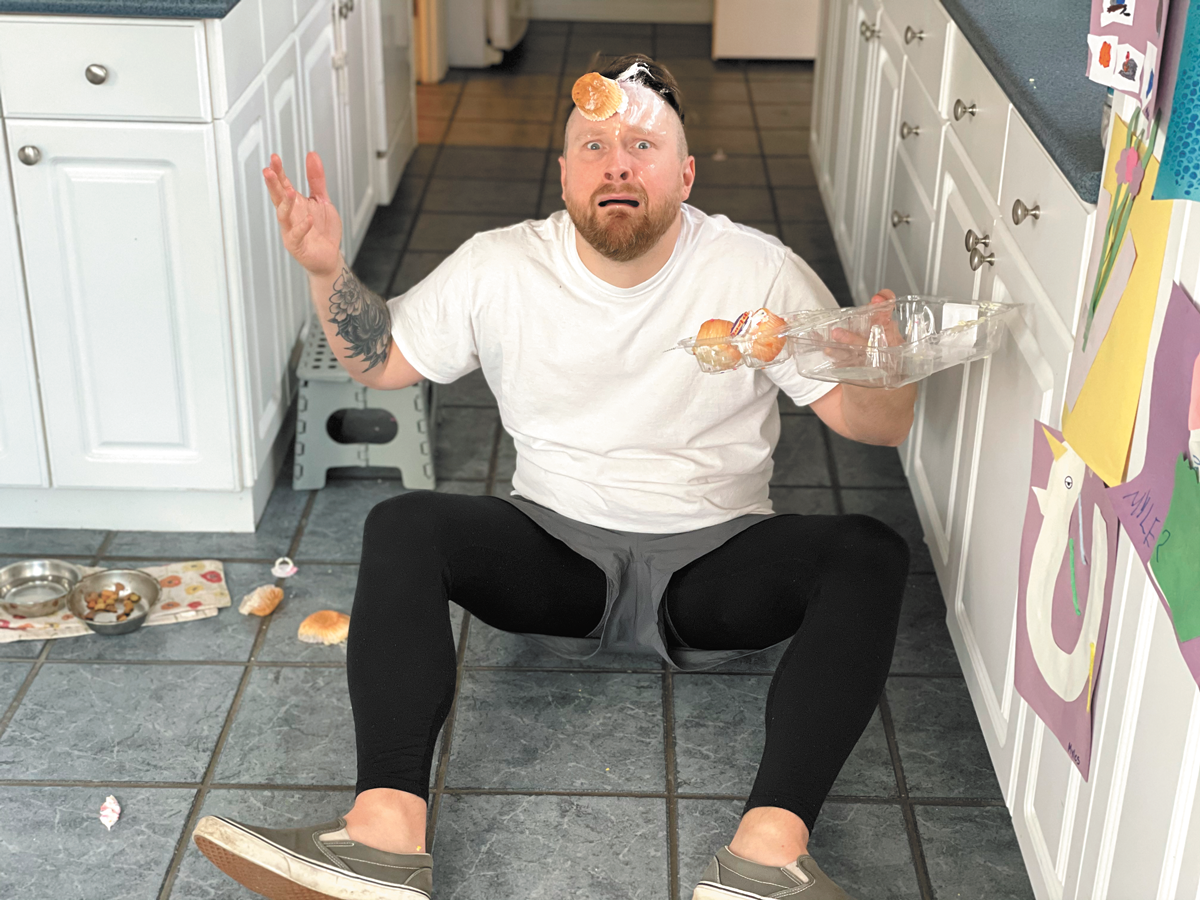 One of Bryan Albrandt's many different characters, "Infomercial guy."

Bryan Albrandt is a dad, a husband and a semi-adult. For the past year he has managed to make that his living, too.

Sporting a Mariners cap, a short beard and a shorts-and-T-shirt combo, Albrandt regales his social media followers with the horror, humor and simple truths about being a parent in the modern age through the eyes of a dude.

A dude who is a dad.

His comedic videos run the gamut from pooping for an audience to wading knee-deep in a playroom filled with toys to sticky floors to just not giving a crap. He plays a number of different characters in the videos, like the "Boy Mom," the infomercial guy, the dorky dad, the rational toddler and, of course, himself.

Albrandt, 38, has amassed a significant following on social media since COVID-19 hit last year, including on TikTok where he has about 135,000 followers and growing. He jokingly admits that he kind of forgot about the Inlander's Best Of poll for local TikTok star until he was contacted for this article. While Albrandt loves the creativity and innovation on TikTok, he works as a full-time content creator primarily through his Facebook channel, he says.

"You have to diversify," Albrandt says of social media. "It's like the stock market or anything. If you put all your eggs in one of the baskets and they say, all the sudden, 'We're going to stop doing this.' There goes your livelihood."

Inspired by the likes of Jim Carrey and Chris Farley, Albrandt started making what he calls "dude humor" videos as a sort of side hobby on YouTube way back in 2010. Two boys later and with the help of his wife, Amber, Albrandt merged his humor into the "parenting niche," he says. He hit viral status a couple of years ago, he says, but it wasn't until right before COVID that things started to change.

Albrandt had just come back from the Dad 2.0 Summit, a conference for parenting bloggers and the like in Washington, D.C. He and his wife posted a video on March 15 about overly cautious parenting — pandemic style — from their South Hill home. The next day, Albrandt was laid off from his graphic design job at Spiceology. But his latest Facebook video started to take off, he says. His other social media pages followed. And the merch. And the advertising.

The rest is history.

"I always knew that's what I wanted to do. ... This was my opportunity," Albrandt says. "My plan is to never have to go into a job ever again."

Previous: Best Local Podcast: The Perimeter with Adam Morrison
Next: Best of Arts