The region's finest gallery, play, band and concert of the year (and other stuff) 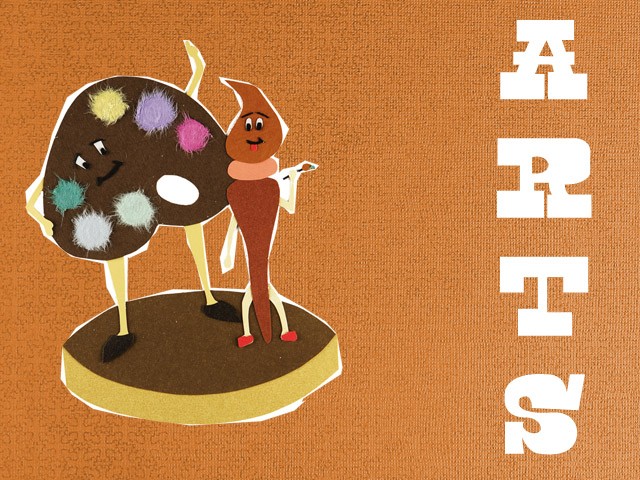 Cleaning house in this category since they became a band in 2007, 6 Foot Swing takes home the title again this year. Fronted by a charismatic chanteuse, Heather O’Brien (also one of The Inlander’s own ad reps), the band plays all over this damn town. We’ve seen them get people dancing everywhere from the Viking to the main floor of the MAC. Their music is consistent, contagious and accessible — casting a wide net that scoops up everyone from beer-drinking hipsters to groovy gray-haired ladies looking to cut a rug. (LS)

Sasquatch Festival at the Gorge

2nd PLACE: Pigout in the Park; 3rd PLACE: The Festival at Sandpoint

It’s Ronnie, Kristen and Jackie in the late morning, afternoon, evening and late nights.... Wait, that’s not it. But where is it that I hear what I need to know, like the 16 freakish facts about the human body and that guy who put on 155 T-shirts — not to mention the music of Colbie Caillat, Daughtry, Green Day and Lady Gaga herself? Oh, that’s right: It’s Dave, Ken and Molly, every weekday from 6-10 am on ZZU, 92.9 FM. (MB)

Art on the Green

Sand is the key. The sand is as good an explanation as any for the appeal of Art on the Green, held in Coeur d’Alene at the tail end of every July.

The sand on City Beach nearby. The sand underneath the feet of the kids playing at the Fort Sherman Playground. The sand that goes into the glassware that’s being displayed alongside all the other art.

My money, though, is on the sand castle (my favorite part of Art on the Green). You’re strolling along the edge of parking lot — off to the edge of the festival, off by itself — and your eye is drawn to a cluster of folks, just staring. Then you notice that even the little tykes — who just now were screaming and running along, making airplane arms — have stopped in their tracks. There’s a guy up there — you have to tilt your gaze up to take in the scale of the Art on the Green sand castle — and he’s carefully, carefully gouging out battlements and carving out portals. It’s a grainy work of art the size of your average Smart Car, and it typifies the appeal of a late-summer stroll across a grassy college campus not far from a gem-like lake. You’re just a short walk from a world-class resort and all the restaurants and artistry of Sherman Avenue.

Meanwhile, back at the festival on the grounds of North Idaho College, booths beckon, guitar sounds waft over the browsing throng, and artists peer up from their lounge chairs to see if you’re interested in buying or just looking.

Arts and crafts and food and music and people-watching. And the beach, with all that sand.

Art on the Green is like small-town America raised to its happy-community, beautiful-stuff-on-display ideal. This July 30-Aug. 1 — before the summer breezes turn into autumn’s cold — you should consider taking the time to stroll past all the jewelry and paintings and metalwork and fiber art from more than 130 artists and craftspeople at Art on the Green.

Along with 50,000 other folks, feel the sand beneath your feet. Watch the sand being fashioned into castles against the sky. (MB)

20th-century New Year’s Eve: Mom and Dad went to an alcohol-fueled party and blew into noisemakers while Junior stayed home with some dumb baby-sitter. 21st-century New Year’s Eve: Mom and Dad take Junior to First Night Spokane, where they spend the afternoon making glitter masks and marching in a parade, then grab a bite together and take in the taiko drummers and the comic jugglers. Junior stares wide-eyed at the ice carving and Snowboard Rail Jam, and then — just as the fireworks light up the midnight sky — crumples into sleep on Dad’s shoulder. Which is a whole lot better than staying home with some dumb baby-sitter. (MB)

Pig Out in the Park

The harvest-and-fertility festivals of the ancient Hittites explain the attractions of Spokane’s September gathering, Pig Out in the Park. Like the Hittites, Spokanites enjoy displaying a) the fruits of their autumn harvest (225 different food items, none over $8.95), and b) their alluring, late-summer-tanned flesh. Clusters of young girls and boys, their hormones all a-flutter, stroll past the very food vendors whose sushi, corn dogs and elephant ears they just gorged themselves upon. At Pig Out, we harvest food and potential mates beyond the Hittites’ wildest imaginings. (MB)

Every year it’s second and third place that switch around in this category. Tinman moves from third to second this year; Coeur d’Alene’s Art Spirit moves to third overall. But no one seems to be able to touch Spokane’s coveted Browne’s Addition museum. Though the MAC is more a museum than specifically an art gallery, winning this category — despite budget cuts, slashed staffing — proves how important that museum is to Spokane’s arts community. (LS)

There are people who read murder mysteries and there are people who listen to musical comedies — and they all went to Curtains. It’s a locked-room mystery with some songs thrown in: The leading lady drops dead at the curtain call on opening night, you see, and the detective’s who’s called in quickly determines that someone in the cast or crew must have done it. Everybody’s quarantined inside the theater while Detective Frank Cioffi ponders all the possibilities. The producer with a philandering husband, the bossy-pants director, the ambitious chorus girl, the songwriting duo (who are divorced from each other) — all of these folks had motive, method and opportunity.

On top of all that, the running gag is that the detective is a big fan of musical theater — so while he’s trying to solve the murder, he’s simultaneously trying to solve all the problems that the struggling musical-within-a-musical is currently experiencing.

Whenever there’s a pause in the sleuthing, somebody breaks out into a song in praise of show business: “Show People,” “I Miss the Music” and “A Tough Act To Follow.” Director Troy Nickerson oversaw the kind of old-fashioned, large-cast, crucial-timing, dance-heavy show that requires a lot of overseeing. Andrew Ware Lewis embodied the singing-dancing detective’s love of the limelight, and dozens of actors brought dozens of characters to life. And the Civic created a great big tuneful valentine to show biz.

In this category, playgoers tend to vote for recent shows that spring readily to mind, so it’s no surprise that this year’s top three shows all played Spokane in January. Love Letters angles for nostalgic romance, and Sylvia appeals to dog lovers. But Curtains reaches out to the folks who treasure their dog-eared Agatha Christie paperbacks and their original cast recordings on vinyl. Theater that’s about theater — as long as it comes with a side dish — suits us just fine. (MB)

For 17 years, the American Cancer Society and the National Association of Basketball Coaches have teamed up in a nationwide charitable effort. In the past eight years, the Spokane chapter has earned nearly $4 million for cancer research (and for bestowing camp scholarships on kids who are fighting cancer). Representing Coaches vs. Cancer Spokane, Gonzaga’s Mark and Marcy Few oversee an August weekend filled with black-tie events and a golf tournament. (MB)

It’s Disney, so it’s colorful and family-friendly and a lot like an amusement park ride. But The Lion King offers something that other mega-musicals don’t: its multitude of life-size puppets. And once you’ve seen the cheetah blended into the human, the human merged into the giraffe, you understand the Circle of Life a bit more — maybe right down to your bones. In its visits to Spokane in 2005 and 2009, The Lion King conveyed a pro-family, pro-environmental conservation message. (MB)

Taylor Swift at the Spokane Arena

Do not do a Kanye West on this girl: Her Spokane show sold out in 22 minutes. Taylor Swift at the Arena gave the tweens with their moms (and the teens with their boyfriends) quite a show last May. The country-pop princess performed “White Horse” in a Renaissance gown, then strolled out through the crowd autographing programs and kissing babies. “You Belong With Me” brought out the marching band costumes, and a waterfall accompanied “You Are Not Sorry.” Yeah, Taylor puts on a show. (MB)

Here in the land of Bloomsday, Hoopfest, First Night and Pig Out, our readers know how to dream big. There are plenty of events they’d like to bring here: a hot-air balloon festival or a PGA golf tournament, a Shakespeare festival or a Sexpo, a square dancing celebration or just “something awesome.” Maybe “Triple-A baseball, like we used to have, or even “a world’s fair — oh, wait….”

There’s even a groundswell of people who’d like to see Robert Redford and all those Park City liberals just relinquish what they’ve built up over the past 32 years and import the Sundance Film Festival lock, stock and film canister directly to Spokane (without even changing its name).

As their favored next big event for hereabouts, a couple of easily impressed voters named “Spokane Arena” and “KHQ coverage.” Meaning that soon we’ll go live to Stephanie Vigil reporting in front of an enormous bank of empty seats. There’s a must-see TV event for ya.

One voter, meanwhile, has had enough of Washington, D.C. — he’s hopeful that we can move the “pesidential inaguration” here.

Which we will, just as soon as we figure out how to spell it.

These are all minority voices, however, with just one or two supporters each.

With double the votes of any other contender, the NCAA men’s basketball tournament was our top choice for staging something big enough to convince the nation that really, we’re not a suburb of Seattle.

Sure, we’ve hosted the opening rounds of the men’s tournament three times (including this week) — and both the opening rounds and one of the four regionals in the 2011 women’s basketball tourney will be held right here in Spokane.

But we’re not picky about which level of March Madness we get to host. The Final Four, for example — we’d take that. The Oscars, too. Maybe a political convention — Republican, Democrat, Tea Party, whatever. A NASCAR race (despite having no track) or the NBA playoffs (despite having no team) — those could be arranged. This is the town, after all, of Don Kardong and Rick Steltenpohl, of Bill Burke and Toby Steward and Barb Beddor. The next big event? We think we’ve been having those all along. (MB)