Back in 1979, Mark Lax opened the first shop of what would become the now 22-store Pawn 1 empire.

As such, Sam Lax, Mark's son, has been behind the counter since he was a toddler.

"I used to joke that I was basically born in the back room of the pawn shop," Sam says.

While hanging out as a kid with his dad, he used to clean showcases, sell video games and even write loans (with dad's guidance, of course). 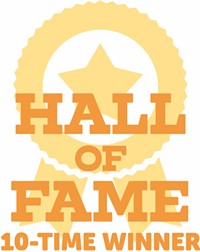 Now, as the company's chief operating officer and vice president, Sam oversees elements of the company's stores throughout Washington and Idaho. What started as three stores with different names in Spokane grew into Pawn 1, which has locations in Western Washington, Spokane, North Idaho, Boise and other rural parts of Idaho.

At the stores you'll find all kinds of stuff for sale, from video game consoles and musical instruments to camping gear, snowboards, bikes and more. In fact, Sam says their inventory came in handy as folks scrambled to find what they needed during the pandemic when other stores ran out, such as computers for kids who were suddenly learning from home.

While shows like Pawn Stars are known for featuring the rarest collectibles and oddities that may come into a shop, Sam says the vast majority of the business is actually acting as something of a neighborhood bank.

"We, in general, look at ourselves as a money services company for people that need interim cash," Sam says. "Of course, in 42 years you can imagine there's a ton of stuff that's come through, whether it's collectibles or something unique. But that's not usually what we seek out."

Instead, the store often deals with jewelry, firearms or other items of value that can get folks that $100 they need now, on a 30- to 90-day loan if they want to get their item back.

In general, pawn shops sometimes have a stigma attached to them, Sam says. But his family and the company have tried to combat that and change the overall perception of pawn shops.

"We offer the cleanest facilities and best customer service possible so someone can feel confident the money they need is there for them, and they won't be judged and will be treated kindly and fairly in the process," Sam says. "We think we run the nicest, cleanest, best, baddest pawn shops in the country."

The original print version of this article was headlined "Best Pawn Shop: PAWN 1, Spokane and CdA"