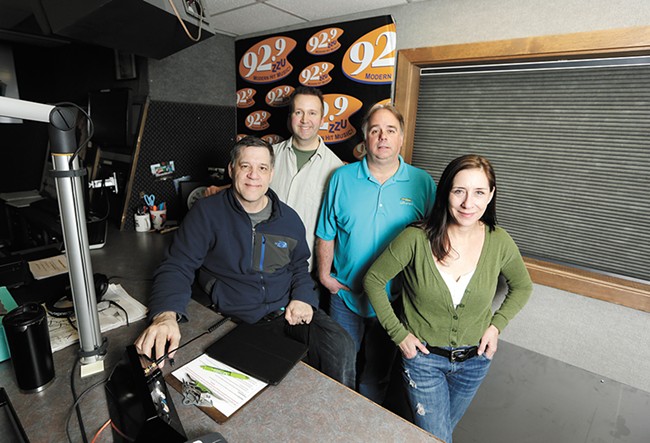 It's easier than ever to listen to music on the go,

to procure playlists and podcasts that make your morning and evening commutes a little less hellish. But some of us still appreciate the personality and unpredictability of live radio, and 92.9 KZZU-FM is the station most of Spokane appears to have programmed on their car stereos.

'99 was a simpler time. Britney Spears had just broken out with "Baby One More Time," Cher's "Believe" was the biggest single on the radio, and TLC's FanMail was the country's No. 1 album. And while those have all been relegated to the oldies station, 92.9 has kept its finger on the pulse of what's hip: Tune in today and you'll hear Drake, Dua Lipa, Bruno Mars, The Weeknd, Ed Sheeran.

KZZU (or "the Zoo," as it has been affectionately known) has changed with the times, remaining relevant in a cultural landscape that isn't always kind to terrestrial radio and adapting its style to reflect the biggest hits of the day.

Amongst the constants at the station are Sposito, Hopkins and Molly Allen, whose addition to the beloved drive-time show allowed them to drop that exclusively masculine moniker and simply go by "Dave, Ken and Molly." But even when their voices aren't being broadcast over the airwaves, KZZU possesses a personal touch that most radio stations don't, as if they're only picking the songs they know you want to hear.

That's something Spotify can't do for you.

The original print version of this article was headlined "KZZU-FM"