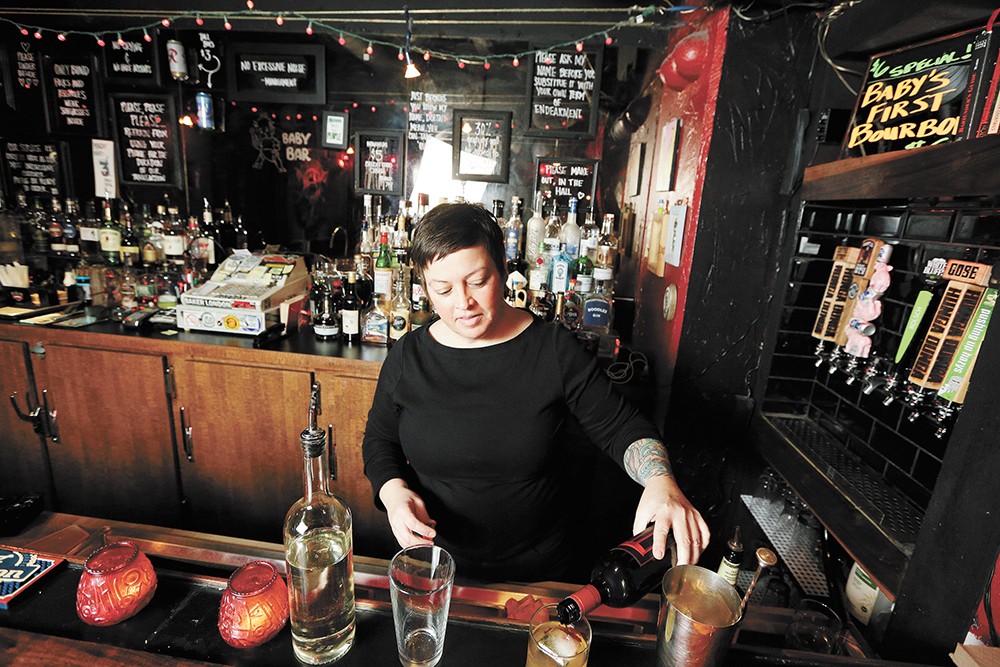 Young Kwak photo
"It's like you're going to your grandma's house for your family reunion," says Baby Bar's co-owner Patty Tully.

Personal, unpretentious, cozy — whatever the reason we love their small spaces, tiny bars are becoming more and more prominent as the drinking culture in downtown Spokane continues to evolve. We can now call it official: We have enough tiny bars in Spokane to warrant them their own Best Of category.

Unsurprisingly, one miniscule libationary still holds the crown amongst locals as the prime example of the genre.

Enter the Baby Bar, a slight but powerful drinkery, conveniently located in the middle of downtown Spokane. Its moody red lighting is flattering to all, its jukebox is unparalleled, and it's attached to its own burrito restaurant.

Beyond any of its atmospheric quirks or culinary treats, the Baby Bar has amassed a deep and colorful clientele thanks to an abundance of one particular trait that we all admire when we're settling in for a drink — reality.

Honestly, nothing should. She's been bartending for the better part of two decades, and that's enough to give anyone an up-close-and-personal glimpse into a community's most sensitive and vulnerable moments. But where the Baby Bar sets itself apart from other bars is how it handles that responsibility.

"It's like you're going to your grandma's house for your family reunion," Tully argues, using an analogy that would make anyone with half of a family cringe. "It's inevitable that some shithead is going to show up, but you still feel safe, because it's your place."

She's right, and even though she's on the other side of the bar, she understands the environment that such a close-quarters building inherently provides. And that's what the Baby Bar thrives on.

"Not trying to sound corny, but just because I'm bartending doesn't make it my space, necessarily," Tully explains. "It's as much your place as it is my place."