You know what happens in the end, but Captain Phillips will still stun you 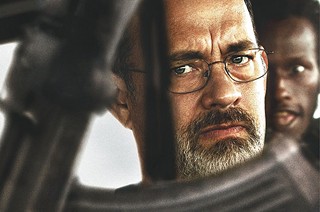 I shouldn't have been so surprised by how good this movie is. After all, most of the time when you put Tom Hanks at the center of a film — well, with the exception of The Money Pit and The Bonfire of the Vanities — you get quality stuff.

Still, I had doubts about this one, as I've found myself having more and more with Hollywood's incessant parade of "based on fact" movies. Is there anyone in America, who owns a television, who doesn't know the story of Captain Richard Phillips? For those with short memories: In 2009, the Vermonter's ship, the MV Maersk Alabama, loaded up with commercial cargo, water, and food aid, was making its way down the East Coast of Africa when it was attacked by Somali pirates who demanded money, then let greed get in the way of things and ended up wanting something more. For those who don't know the story at all, let's just say that the cool, calm captain (Hanks) underwent a harrowing experience but ended up a hero.

I knew the outcome of the story, and even a great deal of its details, so no matter how many instances of dire circumstances and "how-are-they-gonna-get-out-of-this" tension, I was always aware that everything would be OK in the end.

The good news: My attitude was misguided. Director Paul Greengrass (United 93, the first two Bourne films), Hanks and an actor unknown to me named Barkhad Abdi have given us a movie that's near-impossible not to get grabbed by and wrapped up in.

Two brief intros show us Phillips and his wife (maybe five minutes of screen time for Catherine Keener) at home as he prepares to head out on another voyage, and a totally disorganized group of dirt-poor Somalis who are being noisily assembled to jump into a couple of twin-engine skiffs because an unseen Somali boss wants "more people out there getting more ships and making more money."

The script by Billy Ray makes sure to specify that the Maersk Alabama, already far out at sea, is an unarmed ship, and that the captain knows there might be pirate activity in the area. The film doesn't leave much time for viewers to ponder those notes, as almost immediately afterward, the captain sees a couple of mysterious and fast-approaching blips on his radar screen, and moments later attains visual contact — of men with guns on them — through his binoculars.

There's not much room to take a breath in Greengrass' film after that, for a variety of reasons. There's convincing panic among the crew, there's much strife among the pirates, and the tension level goes shooting skyward as a four-person skiff attempts to hook a boarding ladder to the big, unprotected ship.

Even with the eventual inclusion of Navy ships and SEALs entering the fray, the film turns into more of a character study than an adventure story, and focuses on the uneasy relationship that develops between the decent but crafty Phillips and the self-proclaimed pirate leader named Muse, played by newcomer Abdi, an incredibly expressive actor who makes superb use of his eyes, smile, and body language, and exudes an inner energy that, despite being the villain, will elicit a modicum of empathy for him in some viewers.

When the action moves over to the ship's cramped lifeboat, a bright orange contraption that could pass for a toy in a giant's bathtub, Greengrass keeps his cameras right up in people's faces, as he did in United 93. That ups the tension even more. But miraculously, the ending gives us a bit of respite, and any feathers the movie had ruffled will be all smoothed down. ♦