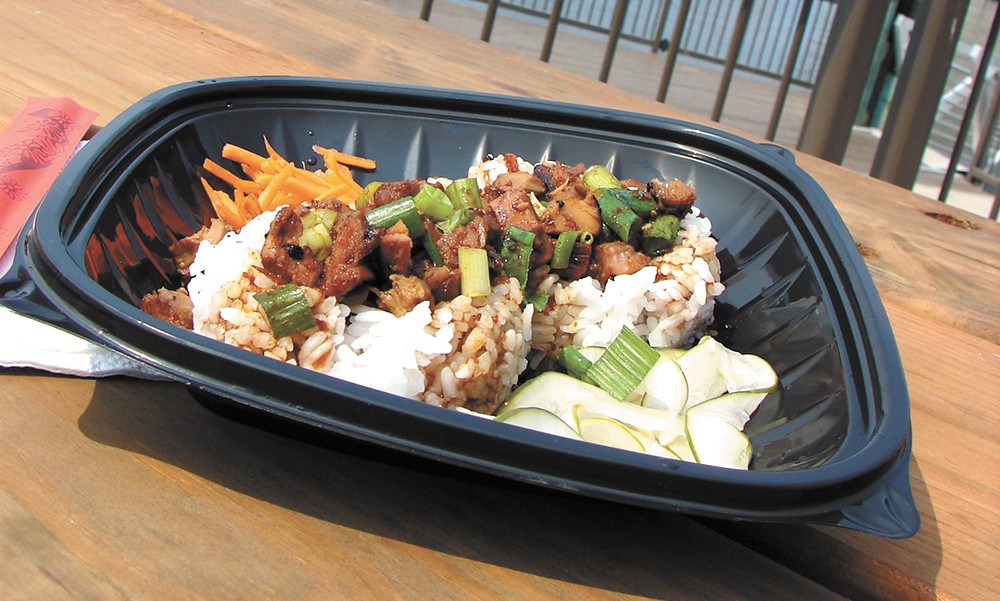 Carrie Scozzaro
A rice bowl from Kiko's with a view on the side.

Randy and Akiko Folk have run the Tiki Hut at Coeur d'Alene's Independence Point for five years, but knew they could offer more than just typical concession food if they had more room and a kitchen.

Things like a Big Kahuna Dog topped with a homemade relish of grilled pineapple, jalapeño and serrano pepper, onion, cilantro and sesame oil. Or slow-marinated Luau Pork on a sandwich, skewered with rice or wrapped in lettuce with cucumber slaw.

That's what they serve at Kiko's Harbor House Grill, a new concession inside McEuen Park. The Chop Chop ($8) combines the best of summer produce — strawberries, blueberries, mandarin oranges — with the zest of feta cheese and balsamic dressing. Shaved ice ($5) is a refreshing sweet treat for all ages, while adults can enjoy beer on-site ($4-$5).

With its island theme, Kiko's is a seasonal stopover reminiscent of casual beachfront eateries the Folks might have visited while living in Southern California.

Besides Kiko's Harbor House Grill, the Folks run Memorial Field's concessions and get help from sons Devin and Julian. July was very busy, says Akiko, who points to the outdoor grill they use to finish meat dishes. Next year, she says, they're hoping that in addition to keeping the contract, Harbor House adds a permanent kitchen. ♦