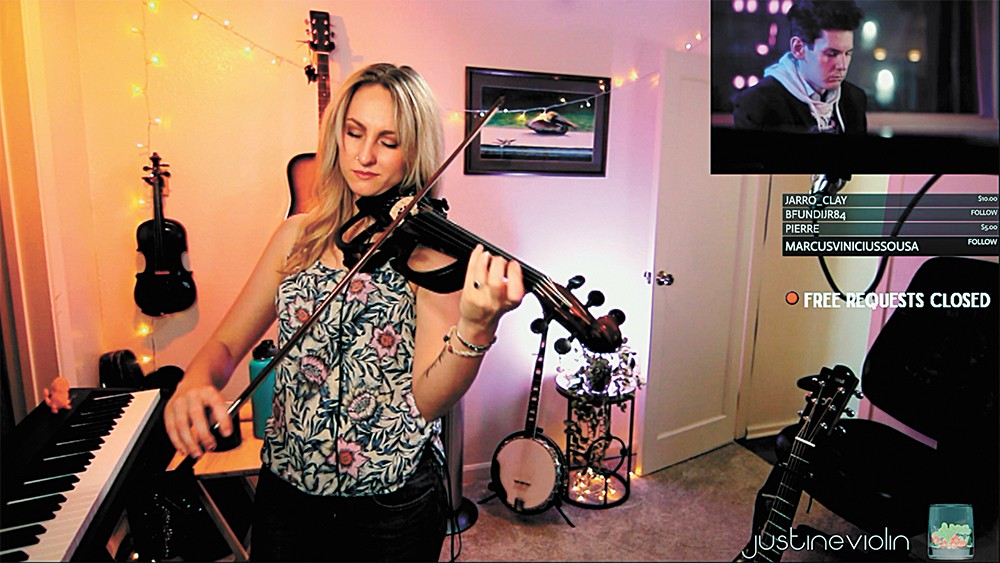 Justine Griffin's new online work space is much more inviting than a cubicle.

Four times a week, Justine Griffin grabs her violin and shuts herself away in her home office, where she prepares to perform for hundreds of people.

She puts her setlist together, making sure she hasn't left off any song requests from her audience. She goes through the soundcheck routine, setting volume levels and making sure everything is mixed and tuned properly. And then she turns on her lighting setup, switches on her camera and logs onto Twitch, the popular live-streaming platform. She usually streams for three to four hours at a time, performing songs and chatting with her viewers, though every once in a while — and depending on how many viewers she has — she'll log a six-hour session.

Griffin, 25, has been playing violin since she was a kid, and has performed alongside local singer-songwriters like Lucas Brown and Jesse Quandt. But she started streaming (twitch.tv/justineviolin) about a year ago out of curiosity and without any expectations, and now she has more than 440 monthly subscribers and generates about 230 viewers per stream.

A few months ago, she left her 9-to-5 position at a Spokane advertising agency, settling into another part-time gig while establishing her Twitch presence on the side. But in the last couple months, Twitch streaming has become her full-time job, and she's bringing in money through tips, monthly subscriptions and contributors to her Patreon account.

"It takes a lot of time to build up a community that's willing to support you," Griffin tells the Inlander, "and you have to attack it from a bunch of different angles to make enough money at it. ... I'm kind of taking a risk right now, but it's turned into something that is an actual income for me."

It used to be that if you wanted to see and hear the latest video game without actually buying it, you'd have to go over to a friend's house and watch over their shoulder while they played. When it was launched in 2011 by Justin Kan and Emmett Shear, twitch.tv both streamlined and commodified that experience: Not only were gamers able to film themselves playing Call of Duty, but they could broadcast it to an audience, talk back to their viewers in real time and even charge for the experience.

It was (pardon the pun) a game-changing technology, one that combined all the best features of social media and online video content. Within just a couple years, Twitch had cultivated a large enough user base that streamers like Ninja, Tfue and Shroud were turning their streams into serious money-making ventures and landing sponsorships with esports, international video game competitions that regularly draw hundreds of millions of viewers.

Amazon acquired Twitch for nearly $1 billion in 2014, and recent reports show that 1.5 million people are watching Twitch at a given time, with an average of 35 million users every month and 4 million active broadcasters.

Of course, the Twitch community has expanded beyond the realm of video games. At any moment, you can tune in to scheduled live streams from an unending variety of streamers — gamers, sure, but also chefs, musicians, dancers and visual artists — and you can talk with other viewers through the platform's chat function. Streamers can make money through subscriptions, which usually offer perks in exchange for monthly payments, or through tips during their live sessions (users have the option of tipping through Venmo or PayPal, or via a Twitch-specific digital currency known as bits).

Tipping is sort of the norm on Twitch, Griffin explains, a practice that's no different from throwing a couple dollars into a performer's open guitar case.

"It's already common knowledge that you tip on Twitch," she says.

And there's another form of sharing the virtual wealth that's built right into Twitch's software: a process known as "raiding," wherein a streamer ends their session and instantly transfers all of their active viewers over to another channel of their choosing. Streamers can also "host" other streamers, so that when they're offline and a prospective viewer visits their profile, that viewer will instead be redirected to another channel with similar content.

This is partly how Griffin amassed her own following, and another unspoken rule of the platform that she says makes it more community-focused than most.

"You always raid someone at the end of your stream," Griffin says. "That's just the way it works. You don't just end. It's a good way for the viewers to discover new people, and for you to support new people at the same time."

Twitch has been likened to an online, multimedia form of terrestrial radio, with viewers tuning in and flipping through stations until they stumble on a sound they like. Click one active channel and you're watching a guy in Tokyo assembling a Lego Millennium Falcon. Another click, and you're listening in on the conversation of two guys road tripping to Utah.

That click-around function is part of what makes Twitch a tantalizing prospect for musicians seeking an audience. Spokane DJ Terry Fisher, who performs as Stitch Jones (twitch.tv/djstitchjones), says he was never able to find a local following for his sets of old-school hip-hop and drum-and-bass music. So he turned to Twitch two years ago, and he now has 400 followers and around 30 monthly subscribers. Fisher typically performs two DJ sets a week — one on Friday mornings, and another on a Saturday or Sunday evening — which means he's hitting at different times in various parts of the world.

Chris Dorsey during a stream to raise money for St. Jude's Children Hospital.

"If I play a certain time of day, I get people from certain countries or certain regions," Fisher says. "A lot of people who watch me are from the U.K., Holland, the Netherlands. There's a guy from Australia who watches on a regular basis. ... You're on an international clock, and people, no matter where they are in the world, want music at some point during their day."

For many artists who rely on live gigs and audience participation, Twitch has also filled the void left by venue closures during the coronavirus pandemic. Nik Bransen, a Spokane drag performer better known as Nikita Romanoff, typically hosts weekly drag shows at the downtown venue the Pin, but he and his cohorts have moved to a Saturday night Twitch stream they call Things That Go Twitch in the Night (twitch.tv/hausofromanoff).

"We're all going stir crazy, we all miss doing drag and we all miss putting our ideas out there," Bransen says. "So I tried my best to find what I could in order to have a platform for us to put it back out there."

The participating drag queens record their performances in advance and send them to Bransen, who edits the videos together and plays them back through Twitch while hosting in real time as Nikita. Twitch is an ideal platform for this sort of show, Bransen says, because it allows users to switch between live content and pre-taped material. The tipping feature comes in handy, too.

"Although it's less about the money and more about us being able to showcase our drag and do whatever we want from week to week, however we feel," Bransen says.

Streamer Chris Dorsey (twitch.tv/dorseus), meanwhile, says he started out playing games on Twitch but soon realized that his art hobby could fit the platform. For about 12 hours each week, he streams himself working on drawings, typically illustrations of comic book and video game characters, and now has about 1,300 followers and 40 monthly subscribers.

"Seeing the amount of support people show is incredible," he says. "It starts off with, 'You're all willing to dedicate an hour or two of your time to just hang out with me?'"

Dorsey has even hosted charity streams, where he'll challenge his followers to donate a certain amount of money within a designated time frame in exchange for quirky rewards: In one instance, he had cream pies smashed in his face, and in another, he had to get a tattoo. It's a gambit that worked, because Dorsey says his followers have raised more than $3,000 for Sacred Heart Medical Center and St. Jude's Children Hospital.

"It's really heartwarming to see that this is the community I helped raise," he says, "and it's cool to see that they're willing to be these kind, outgoing people."

That word — "community" — comes up time and again when chatting with regular Twitch streamers, who feel that their platform of choice provides them with more than just an echo chamber. If you're doing it right and if you're active enough, a Twitch stream can be a two-way street: Commenters aren't merely yelling into the void, and streamers can really sense their audience in the virtual room with them.

"It's more than just a gaming platform," Dorsey says. "It's a device that lets you be creative in whatever way you can think of. As long as you're able to share it, the platform is there."

And for a gigging musician like Griffin, who typically thrives off the pulsating energy of a crowd, Twitch streams have not only comfortably taken the place of regular live shows (at least for the time being) but have even provided a cozier and more personable venue than even the tiniest coffee shop.

"It doesn't feel like it's the same," Griffin says, "but it's more one-on-one because you can talk with them. It's almost more intimate than any live show would be." ♦

The original print version of this article was headlined "Virtual Fanbase"