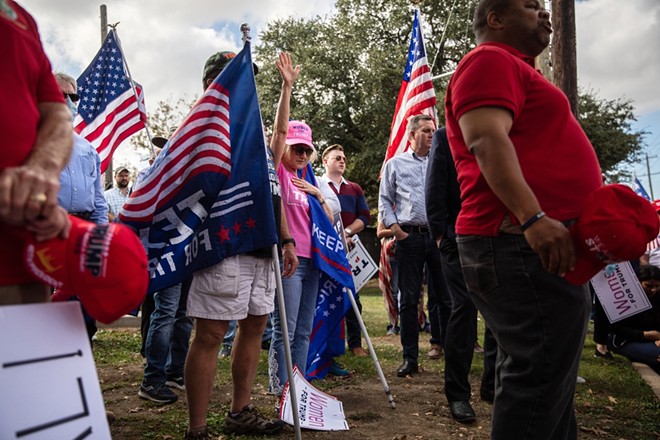 Tamir Kalifa/The New York Times
Supporters of President Donald Trump gather near the Dallas County Elections office in Dallas, during a "Stop the Steal" protest on Nov. 9, 2020. Joe Biden promised not only to win, but to “restore the soul of the nation.” Even with his victory, the deep divisions that animated Trump’s tenure show no signs of receding.

MASON, Texas — The change at the Sunday prayer service was so subtle it went unnoticed by several congregants. The Rev. Fred Krebs of St. Paul Lutheran Church, who rarely brings up politics, fleetingly mentioned this month’s presidential election.

“We pray for a peaceful transition,” he told his congregation of 50 people. The carefully chosen words underscored the political reality in Mason, Texas — a rural, conservative town of roughly 2,000 people — after Joe Biden’s victory over President Donald Trump.

Not everyone thought the election was over, and not everyone said they would respect the results.

That is the hard reality Biden is facing, even after winning a race in which he secured a larger share of the popular vote than any challenger since 1932. Before him is a wall of Republican resistance, starting with Trump’s refusal to concede, extending to GOP lawmakers’ reluctance to acknowledge his victory and stretching to ordinary voters who deny the election’s outcome.

It is all a far cry from how Biden framed this election. He cast the moment as a chance for the country to excise the political division Trump has stoked. Announcing his campaign, he called it an opportunity to restore “the soul of the nation.” Last weekend, he declared, “Let this grim era of demonization in America begin to end here and now.”

But on Election Day, Republican turnout surged across the country. Democratic dreams of a landslide were thwarted as Republicans notched surprise victories in the House and emerged as the favorite to retain control of the Senate. In the days since, thousands of Trump’s most fervent supporters have gathered across the country to protest Biden’s triumph as illegitimate.

A recent Reuters/Ipsos poll found that nearly 80% of Americans believe Biden won, including about 60% of Republicans. But other polling has provided mixed results, including a survey from Politico/Morning Consult showing that the number of Republicans who do not believe this year’s election was free and fair has doubled, from 35% before Election Day to 70%.