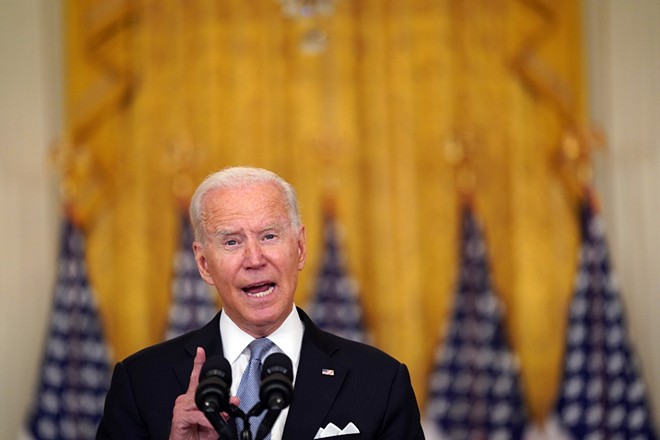 Stefani Reynolds/The New York Times
President Joe Biden delivers remarks on Afghanistan in the East Room of the White House in Washington on Monday, Aug. 16, 2021. The Taliban takeover in Afghanistan underscores the failure of U.S. diplomats to gauge realities on the ground in Afghanistan.

WASHINGTON — President Joe Biden offered a defiant defense on Monday of his decision to withdraw troops from Afghanistan, returning to the White House from a weekend at Camp David amid chaotic scenes at the Kabul airport following the collapse of the Afghanistan government to the Taliban.

Speaking to the American people from the ornate East Room, Biden stood by his decision to end the longest war in United States history and rejected criticism from allies and adversaries about the events of the weekend that left hundreds of Afghans desperately running after military planes as they ferried Americans to safety out of the country’s capital.

“The choice I had to make as your president was either to follow through on the agreement to drawdown our forces,” Biden said, “or escalating the conflict and sending thousands more American troops back into combat and lurching into the third decade of conflict.”

He added: “I stand squarely behind my decision.”

Biden acknowledged the truth told by dramatic images over the past 72 hours: a frantic scramble to evacuate the U.S. Embassy in Kabul in the face of advancing Taliban fighters, which has drawn grim comparisons to the country’s defeated retreat from Saigon at the end of the Vietnam War.

But he rejected the analogy, insisting that the administration had planned for the possibility of a rapid Taliban takeover and expressed pride that diplomats and other Americans had been evacuated to relative safety at the Kabul airport, which aides said was in the process of being secured by several thousand U.S. troops. And he blamed the fall of the Afghan regime on the failure of the country’s military and political leaders to stand up for themselves.

Biden vowed again to rescue thousands of Afghans who had helped Americans during the two-decade conflict, but the fate of many who remained in Kabul and other parts of Afghanistan was uncertain Monday.

The political effect of the weekend’s dramatic collapse of the Afghan government caught the White House off guard throughout the fast-moving events, even as howls of criticism poured in from Republican and Democratic lawmakers, Afghan activists, former President Donald Trump, foreign policy experts and others.