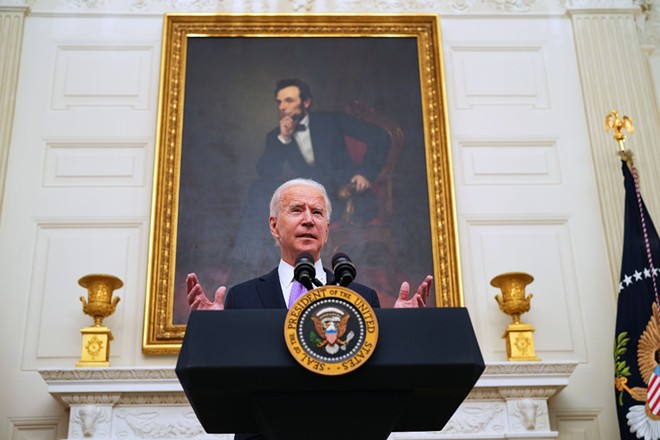 Doug Mills/The New York Times
President Joe Biden talks about his administration’s COVID-19 response during an event at the White House in Washington on Thursday, Jan. 21, 2021.

By Annie Karni and Catie Edmondson
The New York Times

WASHINGTON — Faced with the second mass shooting in a week, President Joe Biden and Democrats on Capitol Hill called Tuesday for fast action to enact stricter gun laws, a plea that was immediately met with a blockade of opposition by Republicans.

In brief, somber remarks, Biden called on the Senate to pass a ban on assault weapons and to close background check loopholes, saying that doing so would be “common sense steps that will save lives in the future.”

His demand for action was the latest in what has become a doleful ritual in Washington: making a renewed call for gun safety legislation after a deadly shooting, this one at a Colorado grocery store where 10 people, including a police officer, were killed Monday.

“This is not and should not be a partisan issue — it is an American issue,” Biden said. “We have to act.”

But Republicans in Congress remained all but immovable on the issue, repeating long-standing arguments Tuesday that gun violence should be addressed through steps like more policing rather than limiting gun rights.

When asked by a reporter whether he had the political capital to move forward with gun safety measures, the president expressed uncertainty. “I hope so,” he said, crossing his fingers. “I don’t know. I haven’t done any counting yet.”

House Democrats passed two bills this month aimed at expanding and strengthening background checks for gun buyers by applying them to all gun buyers and extending the time the FBI has to vet those flagged by the national instant check system.

Sen. Chuck Schumer, D-N.Y., the majority leader, vowed Tuesday to put the bills to a vote on the Senate floor, and Biden urged their passage while also calling for a new assault weapons ban. The gunman in the Colorado shooting was armed with both a military-style semi-automatic rifle and a pistol.

Biden faces political gridlock on the issue despite long-standing public support for tighter gun laws, growing calls for action from many Democrats and the waning influence of the National Rifle Association.

Biden said Tuesday that it was wrong “to wait another minute, let alone an hour, to take common sense steps that will save the lives in the future.”