What officials want to do with exploding oil train traffic 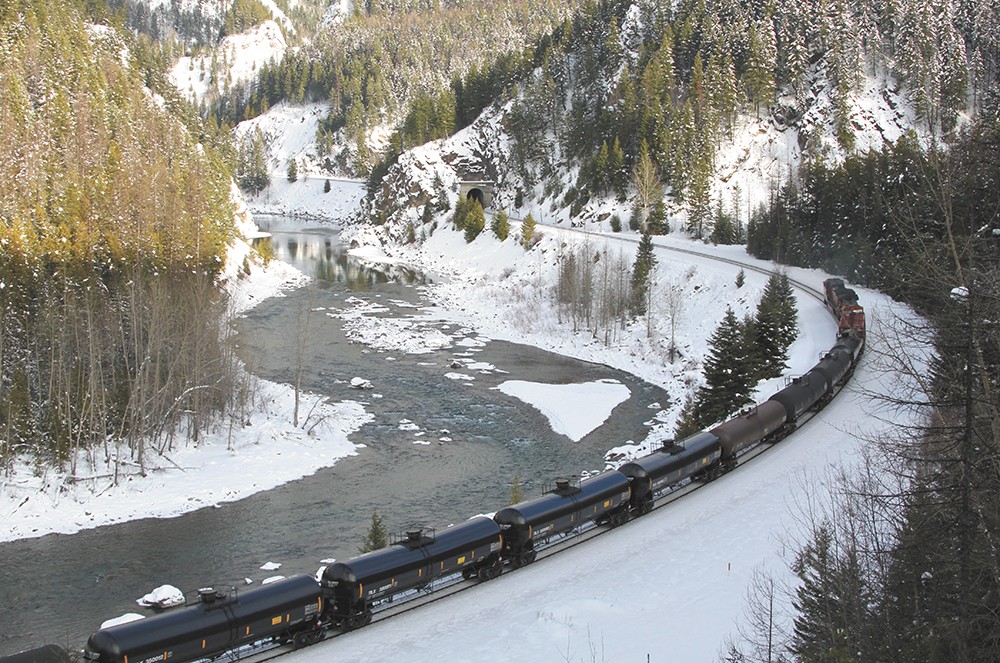 A train shipping oil through Montana.

Every day a potential bomb, sometimes a mile long,

quietly passes through Spokane as it makes its journey across the state.

Beginning four years ago, Washington began seeing a big change in how crude oil was transported across the state. Historically, Washington received 90 percent of its crude oil from tanker ships from Alaska or an international source. Now it comes by trains from North Dakota loaded with crude oil from the Bakken shale. Every week 16 Burlington Northern Santa Fe trains carrying Bakken oil pass through Spokane County, according to a recent report from the state Department of Ecology. The study found that the number of oil trains traveling through the state could rise to 137 a week by 2020.

Bakken oil is particularly volatile, and sometimes these trains derail and explode. In the last month alone, four oil trains have derailed in Illinois, West Virginia and twice in Quebec, causing explosions and environmental contamination. In 2013, a train derailed in a small town in Quebec, killing 47 people.

In Washington, a rail line runs through Spokane Valley, downtown Spokane and Cheney and intersects with I-90. An oil train explosion along this stretch could be catastrophic.

Last year, Washington lawmakers were unable to pass any legislation regarding oil trains. They're trying again this session, and legislators are split on two competing proposals. In Spokane, the only urban center the trains pass through on their way to western Washington, the city's officials have taken different approaches to potential legislation.

Earlier this month, two bills passed out of the House and Senate, respectively. They both seek to provide local communities with more information and resources for responding to an oil train derailment, but differ on how to do that.

The Senate version would require railroad companies to submit notices to be shared with local authorities on the route, time, volume and type of crude oil that was sent through their jurisdiction for the previous week. An amendment to the bill also requires a minimum of three crew members on trains carrying hazardous materials, four if the train is longer than 51 cars. It also creates grants for local first responders.

A competing bill in the House, backed by Gov. Jay Inslee, would go further by requiring rail companies to provide daily notices to local governments. Under the bill, rail companies would have to demonstrate the ability to pay for worst-case spills. It would also increase a per-barrel tax, that currently only applies to marine transport, from 4 cents to 8 cents. The tax, which is directed toward oil spill prevention, would also be applied to oil transported by rail and pipeline in Washington state.

"[The Senate bill] is too weak to declare victory, if that's the one that passes," says Spokane City Council President Ben Stuckart, who has traveled to Olympia to support the governor's bill.

Proponents of the governor's bill, which includes Spokane Democratic state Reps. Timm Ormsby and Marcus Riccelli, say that local governments should have daily notification of oil trains because different types of oil, such as Bakken crude, are more volatile and fires resulting from them are more difficult to put out, and first responders could be better prepared if they know what's coming.

Opponents of requiring more frequent disclosure from rail companies say that the information could be hacked and land in the hands of terrorists, to which Stuckart responds, "I think we've got a lot bigger threat with oil trains than terrorists."

Mayor David Condon has not been to Olympia to lobby on the bills, and he says he doesn't have a firm position on either. But he might develop a firmer position as the session progresses.

"You know, I just got a side-by-side comparison [of the bills]," Condon tells the Inlander. "I haven't had a chance to review them."

Condon says he has been engaged on oil train safety, serving as co-chair on a committee with the Association of Washington Cities dedicated to freight rail. Local first responders have undergone training exercises to prepare for an oil train derailment, says Condon, and his administration has concentrated on making sure that planning and communication are in place for such an event.

Stuckart and Councilman Jon Snyder, however, would like to see the mayor push harder for better protections.

"I'd like to see him be more [engaged on the legislation]," says Snyder. ♦

What happens if WA Gov. Jay Inslee takes a job in Biden’s cabinet