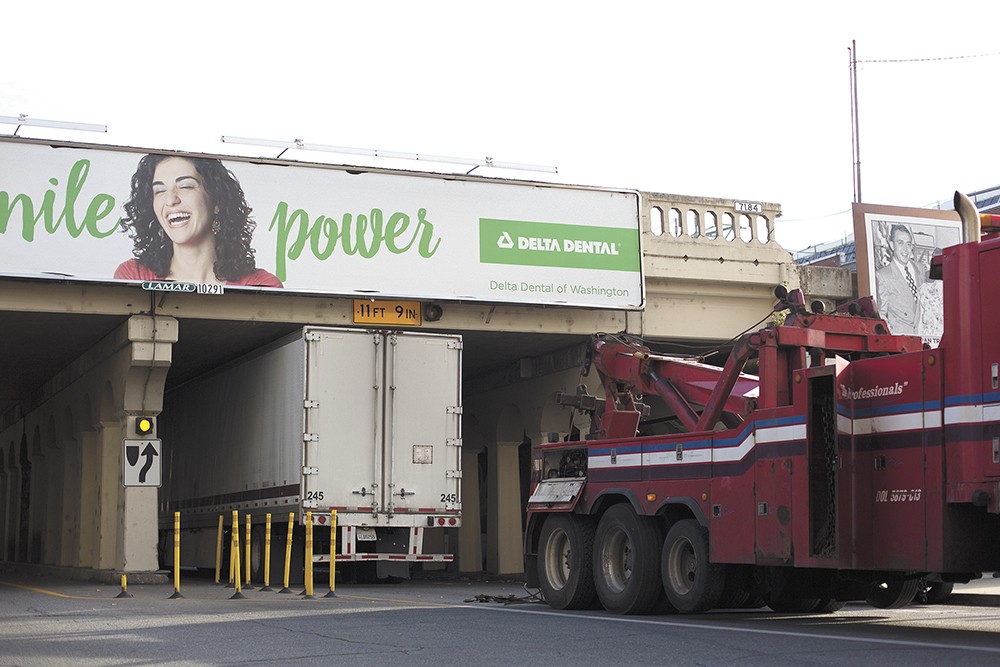 Young Kwak
A truck, like several others this year, gets wedged underneath the railway bridge downtown, despite the sign warning of the low height.

This time, the truck driver nearly made it through.

The gap between the pavement of Stevens Street and the top of the BNSF Railway bridge between First Avenue and Second is about 11½ feet.

That's two inches shorter than the "can opener," an 11-foot, 8-inch overpass in Durham, North Carolina, that has achieved international infamy for scalping more than 100 trucks whose drivers mistakenly think their vehicles are short enough to slide through.

But the Fred's Appliance truck became stuck under the Stevens Street underpass on Oct. 18, blocking multiple lanes of traffic until it could be extricated. And it's hardly the first truck to be clotheslined at that underpass this year. Local TV outlets reported that at least three other trucks have been stuck at the same spot this year, despite the bright yellow sign warning drivers exactly how little clearance they had.

In total, KHQ reported in September, 13 trucks had hit low Spokane bridges in 2016 alone. Either way, along with harming the truck, it can create huge traffic jams for hours. If the truck hits a railway bridge, trains sometimes have to be stopped and the bridges inspected for damage.

Many of the truck drivers who've hit the bridges, Serbousek says, aren't ignorant out-of-towners. A lot of them are locals.

"Which is crazy," Serbousek says. "The excuse we've been getting is they didn't pay attention."

The Inlander brainstormed with Serbousek, trying to figure out if there was something — anything — that the city could do to stop the bridge bashers without spending millions to raise bridges or lower streets.

Serbousek notes that for decades, there have been signs warning drivers of the low heights on the bridges, complete in some cases with yellow flashing lights to make it really clear.

He says there's a limit to what signs can do.

"We are reaching a point where we're saturated by signs," Serbousek says. After a while, drivers, especially those familiar with the area, tend to zone out and ignore many of the signs they see.

Part of the trouble is that most of the bridges that trucks get stuck under downtown aren't actually owned by the city of Spokane. They're owned by BNSF Railway. Putting anything directly on the bridge requires the railroad's permission, which in turn requires navigating through the railway's entire corporate bureaucracy.

Think of the pole sticking out before you try to go up the ramp to the NorthTown parking garage. If you're too tall, you hit it, hear a loud noise, and feel pretty stupid. But you're still able to back out without much damage done, beyond some scratched paint and wounded pride.

The trouble with this idea, Serbousek says, is that for this sort of thing to work well, you typically need to give trucks enough time to stop or turn around before they get that far. But since the blocks in downtown Spokane are so close together, that creates a dilemma for street engineers. They have two choices:

1) Put the pole up the street from the bridge, where trucks still have the option to turn down other streets. "Now we have trucks that aren't going that direction, and they can't go underneath the [warning] pole," Serbousek says.

2) Put the pole closer to the bridge, which might not give truck drivers enough time to realize their mistake before hitting the bridge.

"Is it going to stop them?" Serbousek says. "Some of these guys are getting halfway through the bridge before they stop." Not only that, but it won't do much to prevent traffic jams created by a truck needing to slowly back up in the middle of a busy intersection.

In some cities, infrared sensors or radar detect when trucks are too high to pass under a bridge, and then trigger electronic signs that signal drivers of tall trucks to either stop and turn around or take a detour.

One clear downside is cost: A New York study of bridge strikes by trucks identified that a lot of places have found these sort of detection systems to be effective. But they come with a hefty price tag, often $10,000 or higher per location.

And that, ultimately, is the rub with any solution, Serbousek says.

In other words: How much taxpayer money do you spend to try to save truck drivers who are just plain not paying attention? ♦