The best local performances of the year 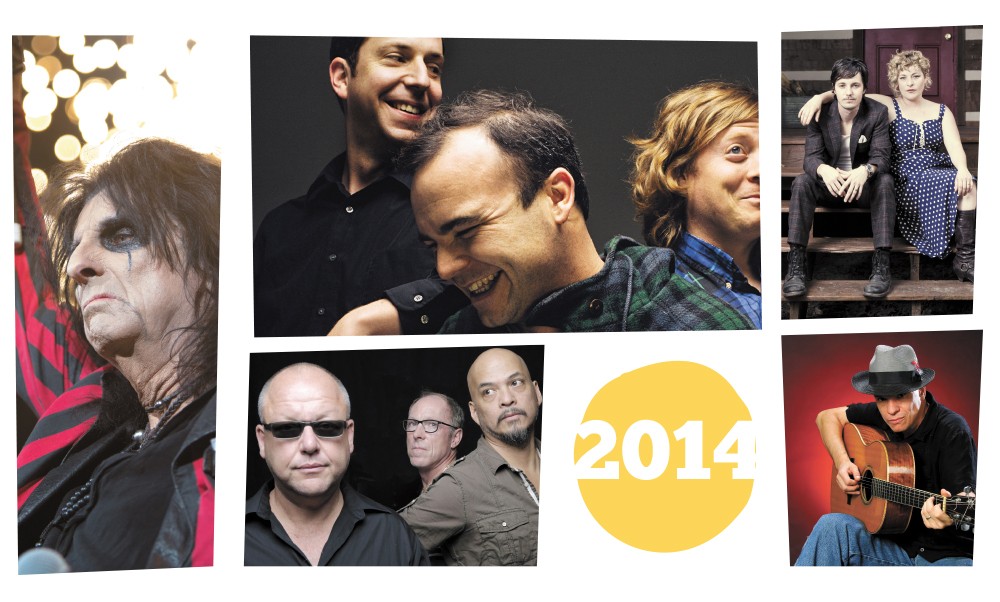 2014 was huge for Future Islands — now appropriately labeled the band's "breakthrough" year after the release of its fourth record, Singles. So it was no surprise when the Baltimore-based trio sold out its Spokane debut well before arriving. (In hindsight, the band likely would have filled a much, much larger venue.) Locals already turned on to Future Islands' electric stage presence — mostly frontman Samuel T. Herring's emphatic dance moves — and driving, upbeat tracks danced the hour-long show away. Herring never stopped moving, sweat soaking through his all-black T-shirt-and-slacks ensemble and dripping from his face into tiny puddles onstage. (CHEY SCOTT)

Musical chemistry can't get much better than a husband-and-wife duo like Shovels & Rope. With a deep well of soul and endless energy, the two trade off on sharp harmonies and lively duets. They also switch instruments throughout the set, going back and forth on guitar and percussion. Light-hearted banter peppered their set — except for a moment when a voice called for Michael Trent to take off his shirt. A protective Cary Ann Hearst, in the most dead-cold delivery I've ever heard, wheeled around and warned: "I will cut you in half." Nobody made any more catcalls. (JACOB JONES)

Of the few times I was fortunate enough to see Angel Olsen in 2014, her performance at the Bartlett was unquestionably the best show I saw in Spokane all year. Dripping with confidence and wit, she tore through almost an hour-and-a-half worth of songs new and old. She is a remarkable talent, with a stunning, gold-plated voice and a charming wisdom far beyond her years. Admittedly, I'm usually not one to sing along at a show, but there was something cathartic about letting it all out. "Are you lonely too? / High five! / So am I." (JORDAN SATTERFIELD)

As I approach 30, the list of songs that can lure me into a mosh pit has dwindled to a small handful. While Against Me!'s "Pints of Guinness Make You Strong" remains on that list, I did not really expect it to happen. I had all but given up on Against Me! after some disappointing records. Their music didn't resonate like it used to. But this year's Transgender Dysphoria Blues proved singer Laura Jane Grace still knew how to raise hell. And their live show kept that promise with a rapid-fire set of anarcho punk anthems from across their career. Grace owned that stage and belted out for all she was worth. When the band started into "Pints," I charged into the flailing crowd. (JJ)

One of the biggest musical shocks I had all year was finally getting to see Japanese doom metal vets Boris and being completely stunned by... how loud it wasn't. The intimidating walls of Orange and Sunn amplifiers seemed to heed a volume-related warning, but instead they delivered an articulate, thoughtful and completely audible arrangement of tracks ranging from sludgy to uncontrollably wild. After playing the entirety of their brilliant new album Noise, the highlight of the night was their final song — a particularly gnarly rendition of the implosive "Vomitself," one that seemed to last a swirling, crushing eternity. (JS)

Five Alarm Funk surprised me. I didn't think I was into funk, but the Vancouver B.C.-based band had me at the words "I'm gonna wash your face!" Yes, the raucous nine-piece band played a sassy funk song about washing another person's face, and it was so cool. On stage, there was brass for days and congas and timbales. One singer marched in place and saluted the crowd. The whole show was so bizarre and priceless that the high schoolers in front of the crowd were as into it as the old folks in the back. Under the night sky, I jumped to the groovy beat with new friends, pretended to wash faces and even marched in place. I couldn't stop smiling. (LAURA JOHNSON)

It's rare that one actually feels privileged for the opportunity to buy a concert ticket, but the visit by roots-music supergroup the Dave Rawlings Machine was just that, a privilege. Led by Rawlings, longtime musical partner of Gillian Welch, the band played a joyous blend of old traditionals, covers and Rawlings originals, and they were clearly as thrilled as the audience to be there. The instrumental interplay was awe-inspiring between guitarists Rawlings and Welch, former Old Crow Medicine Show cat Willie Watson, Punch Brothers bassist Paul Kowert and a mandolin master you might remember from his days in Led Zeppelin — John Paul Jones. (DAN NAILEN)

The cavernous INB is not the ideal environment to see what is essentially an indie band — albeit a long-running, legendary one. Even so, the Pixies had little trouble making the place feel intimate as Black Francis' howls and Joey Santiago's distinct guitar squalls filled the space with the band's distinctly spacey post-punk sound. The old hits thrilled, as "Wave of Mutilation" and "Planet of Sound" bookended a two-hour blaze through nearly 30 songs. And the new songs from the band's 2014 release Indie Cindy fit in just fine, as did bassist Paz Lenchantin, who joined David Lovering in the rhythm section in Kim Deal's stead. (DN)

Featuring Adventure Club, Destroid and Flux Pavilion, young Spokanites flocked to the traveling electronic dance music show Safe in Sound. The arena's size intensified the feeling of chaotic grandiosity. With blends of drum and bass, dubstep and trap, these artists brought the alternative ravers and the classic college partygoers together for a night of flashing lights and throbbing beats. For five hours in a row, it was all about that bass. (MOLLY SMITH)

Tireless road warrior and keeper of the honky-tonk flame, Wayne "the Train" Hancock, finally made it to Spokane in October, and boy, was he worth the wait. The show was made all the sweeter because it almost didn't happen at all — Wayne was originally scheduled to play June 4, but was involved in a serious motorcycle accident in his native Texas. Luckily for us, he appears to be invincible and showed up no worse for wear. With the demeanor of a favorite, crazy uncle and the voice of Hank Sr., Hancock took us on a musical tour of the old, weird America and brought along some of the hottest players around. (GAWAIN FADELEY)

"I swear to God, our music is going to haunt you until the day you die," frontman Vince Neil proclaimed near the end of Mötley Crüe's Spokane Arena show. For many fans in the packed-to-the-rafters-audience, that's the truth. But the spectacle of the show is what will stick with me forever. Part of the Crüe's alleged final tour, the crazy night included extreme pyrotechnics, fiery anarchy signs and Tommy Lee and his drum kit hitting up a roller coaster. Alice Cooper kicking off the night with a beheading didn't hurt either. (LJ) ♦