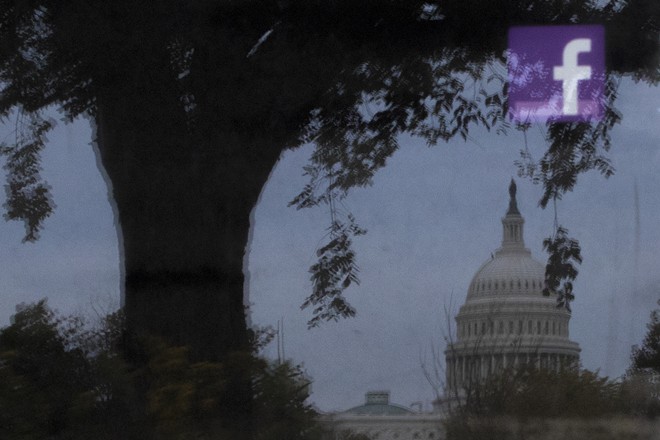 Tom Brenner/The New York Times
A Facebook logo, seen in reflection on an advertising board near the U.S. Capitol in Washington, Oct. 25, 2018. Facebook could face more intense government scrutiny, as regulators have decided that the Federal Trade Commission will oversee antitrust complaints about the company, according to two people with knowledge of the matter in 2019.
By Cecilia Kang
New York Times News Service

The oversight is part of a broader effort by the Justice Department and the FTC to divide up antitrust enforcement duties for many of the industry’s biggest companies, including Google and Amazon. Regulators appear interested in Google’s advertising and search business. Some consumer groups and vendors argue that Amazon blunts competition.

The divvying of antitrust enforcement does not mean the agencies have opened official investigations. But the moves illustrate the growing discomfort by U.S. regulators and some politicians with the power that a handful of Silicon Valley’s businesses wield.

Regulators have struggled to keep pace with the growth of technology companies, which dominate large portions of the economy.

Competitors and academics have raised complaints about the biggest tech companies for years but have gotten little for their efforts in the United States. Now, though, the debate is moving into politics.

The two agencies began negotiations a few weeks ago over the companies and issues related to competition in the tech sector.

The FTC is approaching the end of an investigation into Facebook’s handling of data privacy, and the company is expected to pay up to $5 billion in a settlement. Any look into antitrust issues would be separate from that inquiry.

The FTC is also close to the completion of a privacy investigation into Google that has lasted more than year. The agency approved Facebook’s acquisitions of picture-sharing site Instagram in 2012 and messaging app WhatsApp in 2014. The FTC’s antitrust authorities have experience with Amazon, with the agency’s approval of the e-commerce giant’s purchase of Whole Foods in 2017.

Shares of Facebook were down more than 7% on Monday afternoon. Google and Amazon were also sharply lower. Apple was down slightly.