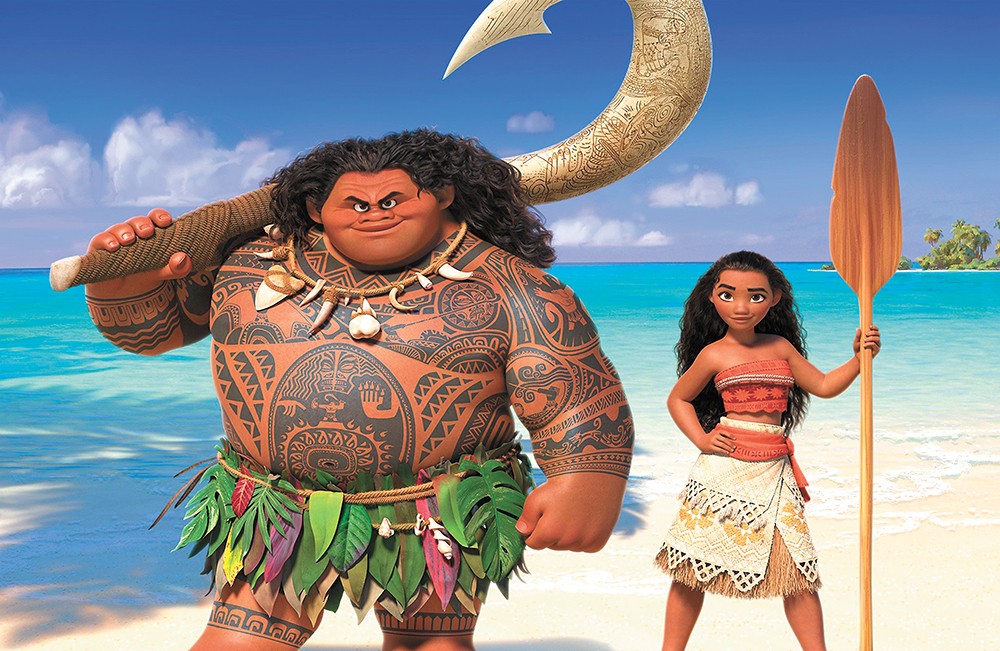 Moana takes us to ancient Polynesia for a heroic story.

"There must be more

than this provincial life!"

So goes the melancholy cry of the Disney princess. But it becomes so much more, something so much bigger in Moana, yet another triumph for the Mouse's animation arm. Sweet, funny, exciting and moving, this is a transcendent experience, bringing to the screen a pan-Polynesian cultural tradition that has been entirely absent from mainstream entertainment. Here is a wonderful mythology of demons and demigods, and a creation story unlike any we've seen before: this is ancient fantasy that feels fresh because so few of us have been exposed to it before (unlike European-flavored fantasies and Judeo-Christian creation myths, which get so much play). But Moana's story, set thousands of years ago, also has much to say to us today.

The first thing electrifying about Moana is that its heroine isn't just a girl longing to see, literally, new horizons. Yes, Moana is driven to find out what lies beyond the reefs off her beautiful South Pacific island paradise, reefs beyond which her people are forbidden to venture. What makes her special is how she will achieve this: she is chosen by the ocean itself, as a reward for a kind act toward a sea creature, to take on a quest involving a long and dangerous journey that will, hopefully, save her island and her people. From Ulysses and Jesus to Luke Skywalker and Neo and that doofus in the Lego Movie, our literature is replete with "Chosen Ones" who are male. The hero with a thousand faces finally, this time, has a female face. A brown female face. A thousand hoorays would not be enough.

There is, in the grand Disney tradition, much soul-searching and lots of "be yourself" encouragement, but we've never seen anything like how that takes shape here via Moana (the voice of newcomer Auli'i Cravalho). She wonders why she dreams of doing something that her father, Chief Tui (the voice of Temuera Morrison), insists cannot be attempted. But then, in an astonishing sequence, Moana experiences a soaring vision of the past of her people as daring explorers who crossed vast oceans, who were brave and intrepid, not confined by comfort and timidity. Moana isn't a misfit: she embodies a bold and restless spirit of her people that has been denied for too long.

This is wonderful. A girl. A "mere" girl. The very incarnation of her culture. Amazing.

It is impossible to overstate how much girls — and women — need to hear this.

The adventure that Moana embarks upon requires her to find the trickster demigod Maui, who long ago stole the heart of the mother of the earth, which caused some bad things to happen and darkness to spread. The heart needs to be put back, and only Maui can do that with his magic. When she finds him, she discovers an arrogant jerk (with the voice of Dwayne Johnson) with no desire to help humanity, certainly not after how ungrateful we all are for everything he did for us (roped in the sun, set the tides rolling). She will convince him that it is in the best interests of his reputation — in which he is inordinately wrapped up — to help her.

That the animation is splendid goes without saying. And the songs... oh, the songs! Just as a musical, as a story that evolves through song, this may be the best Disney entry since the heydey of Alan Menken and Howard Ashman in the early 1990s, or at least since The Lion King, thanks to Samoan-Kiwi singer-songwriter Opetaia Foa'i, Mark Mancina and Hamilton's Lin-Manuel Miranda. (Johnson gets a hilarious song for Maui: it turns out The Rock has a very pleasant singing voice.)

Ultimately, Moana's quest, the wrong she must put right, is one with a very applicable message for us today: "Do not piss off Mother Earth, because she will turn on you... but it's never too late to fix the mess."

If Moana becomes an inspiration for youngsters today to become the green warriors of tomorrow — which doesn't seem unlikely — she may end up embodying the spirit not just of her Polynesian peoples but of all of us. And that would truly be unprecedented. ♦

Moana is not showing in any theaters in the area.