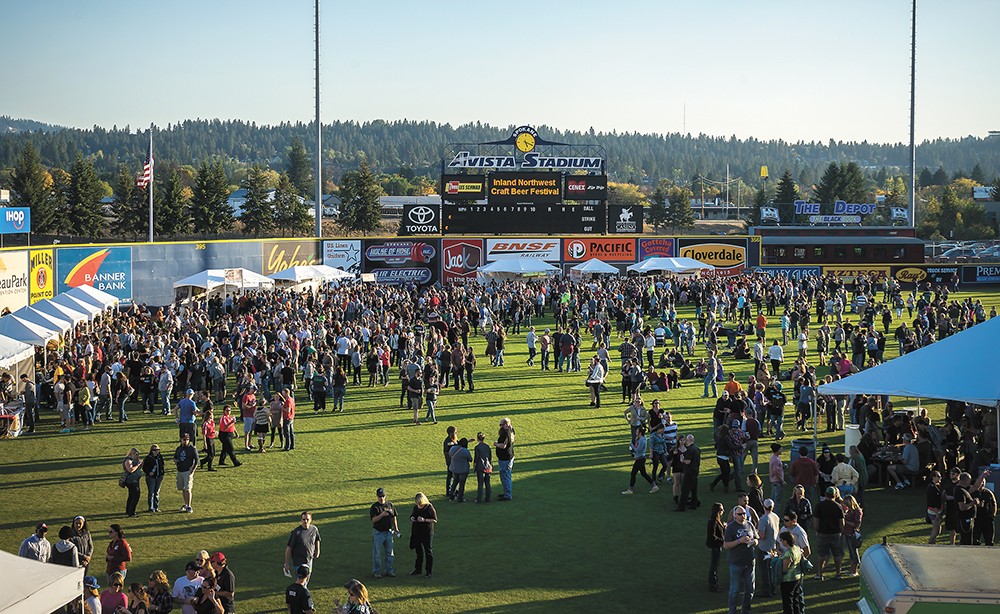 Marty Hiester photo
This year's festival in the outfield of Avista Stadium features even more beer than the last time around.

that has taken place in the Spokane area over the past half-decade. We can talk about the number of new breweries, or the emergence of growler stations and beer bars. If we want to get really technical, we can tally the amount of barrels brewed and even track how many of those are traveling to other markets, serving as liquid evangelists for a craft beer scene that's turning heads in the Northwest.

But perhaps an easier, more visible metric would be to visit the Inland Northwest Craft Beer Festival this weekend at Avista Stadium. It's the third year the event has been held in the outfield of the Spokane Indians' baseball park, but the festival's seventh year as a whole. It previously took place in downtown Spokane and initially took on an Oktoberfest theme. Since its founding, a number of other large- and small-scale brewfests have popped up, something the Washington Beer Commission — a state commodity commission that promotes Washington's multibillion-dollar brewing industry — is happy to see.

The early days of the Inland Northwest Craft Beer Festival were a challenge — including one year that took place during a daylong rainstorm at Riverfront Park — and attendance wasn't where they wanted to see it, says the Commission's Executive Director, Eric Radovich.

"Our first beer festival as a beer commission outside of Seattle was in Spokane. We figured that Spokane would be next, and not just because it's the next most populous area, but it's a place where people appreciate good food and beer," he says. "We stayed the course despite some tough going early on, and now it's paying dividends."

The festival has grown into its home at Avista, and this year features 41 breweries from the state of Washington (sorry, North Idaho, but this is Evergreen State only), including nearly every beermaker in the greater Spokane area, for a total of 172 different beers. There's the godfather in No-Li Brewhouse, but also fledgling breweries like Millwood's Badass Backyard Brewing and Whistle Punk Brewing from Newman Lake. The out-of-towners at the event are some of Washington's most renowned breweries, including Yakima's Bale Breaker, Seattle's Fremont and Georgetown breweries, as well as Bellingham's Boundary Bay.

For the first time this year, the festival's Saturday session will be all-ages, allowing child-rearing beer lovers into the event so they can taste. Children can enjoy a special family area with kids' activities.

"We know that Spokane is an area with a lot of families, and so hopefully this helps bring those families in," says Radovich.

Somewhat unique to this festival, says Radovich, is the fact that a lot of breweries bring more than the typical three to four options. Spokane Valley's Twelve String Brewing, for example, plans to roll through 10 different beers between Friday and Saturday, including adventurous creations like a passionfruit gose and a syrah wine-barrel-aged blackberry stout. These sorts of beers can set breweries apart at a big festival, says Radovich.

"They're tricking out some special beers for these events to distinguish themselves at a festival," he says. "People are looking to have creative beers along with their flagships." ♦

GET YOUR FRESH HOPS AT THE FESTIVAL

You may have heard that the Yakima Valley alone produces about 75 percent of the nation's hops. This means that beer starts here. It also means that Washington breweries — be they in Seattle, Spokane or elsewhere — have the ability to make fresh hop beers.

Sometimes called "wet hop" brews, these creations are brewed with whole hop flowers that go from the vine into the wort in a matter of hours. The result is a floral aroma and a powerful hop taste. Most of these are done as IPAs, but that's not always the case.

At the Inland Northwest Craft Beer Festival, you can introduce yourself to the fresh hop concept. Pullman's Paradise Creek is bringing their Alpha Madness Fresh Hop IPA to Avista. It's big at 6.8 percent ABV, but so smooth and aromatic that you won't notice. Using fresh-cut hops from Carpenter Ranches in Granger, Wash., last year's Alpha Madness was one to remember. Perry Street Brewing came back from Yakima with 300 pounds of Simcoe hops that brewer Ben Lukes tossed in with an additional 50 pounds of Mosaic hop dust.

At least one local brewery, Top Frog in Newport, doesn't even have to travel to the Yakima Valley to do a fresh hop. Brewer Casey Brooks grows a full acre of hops, some of them since the early '90s. At the festival, he's bringing a wheat beer he calls Squeezed Wheat. The lemony brew features fresh Mosaic hops that give the effervescent creation a kick.

"It's an odd duck to do [fresh hop brewing] with," says Brooks. "A lot of beers that people do fresh hops with are hops-dominated, but this came out more intense than I expected. It worked out better than I expected."