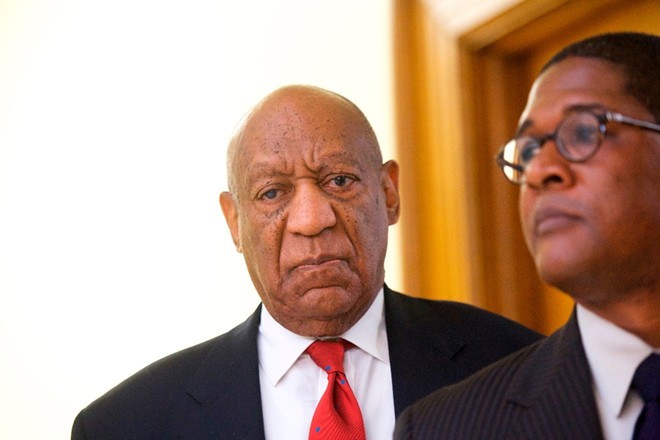 Mark Makela/Pool via The New York Times
Bill Cosby reacts while being notified of a verdict in his retrial on sexual assault charges at the Montgomery County Courthouse in Norristown, Pa., April 26, 2018.

Bill Cosby had his conviction for sexual assault overturned by a Pennsylvania appeals court on Wednesday, a decision that will set free a man whose case had represented the first high-profile sexual assault trial to unfold in the aftermath of the #MeToo movement.

Three years into the prison sentence of three to 10 years he has served at a maximum-security facility outside Philadelphia, the 7-member Pennsylvania Supreme Court ruled Cosby, 83, had been denied a fair trial in 2018.

The ruling upended the legal case against Cosby brought by prosecutors in Pennsylvania that began with his arrest in 2015 on charges of drugging and sexually assaulting a woman at his home in the Philadelphia suburbs 11 years earlier. At the end of the trial in April 2018, the jury convicted Cosby, who for years had brightened America’s living rooms as a beloved entertainer and father figure, of three counts of aggravated indecent assault against Andrea Constand, to whom Cosby had been a mentor and at the time a Temple University employee.

In 2019, an interim court had upheld the trial verdict. But the Supreme Court, the state’s highest court, agreed to consider the case and at a hearing in December some of the court’s seven justices questioned prosecutors sharply.

In their 79-page opinion, the judges wrote that a “non-prosecution agreement” struck with a previous prosecutor meant that he should not have been charged in the case, and that Cosby should be discharged. They barred a retrial in the case.

In 2005, Cosby was investigated in the case of Constand, and a former district attorney of Montgomery County had given Cosby his assurance that he would not be charged in the case. The former district attorney, Bruce Castor Jr., has testified that while there was insufficient evidence to bring a criminal prosecution, he had given Cosby the assurance to encourage him to testify in a subsequent civil case brought by Constand.

In that testimony, Cosby acknowledged giving quaaludes to women he was pursuing for sex — evidence that played a key part in his trial after Castor’s successors reopened the case and charged Cosby in December 2015. That was just days before the 12-year statute of limitations expired in the case, and it came amid a number of new accusations from women who bought similar accusations of drugging and sexual assault against Cosby.