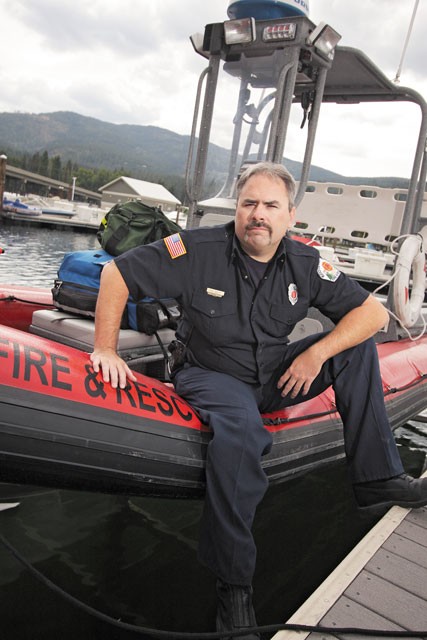 Young Kwak
Youre on your own making decisions, says Bill Keeley about responding to emergencies on Kootenai County waters. This career doesnt work well for people who are wishy-washy.

Lake and river rescues require Lt. Bill Keeley, 46, to throw himself into miserable situations. When an emergency call sends him rushing to one of the two Kootenai County Fire and Rescue boats, he wears a heavy fire-resistant uniform and life jacket, no matter the weather.

“We arrive, and people are injured and freaking out in the water. We jump in … wearing uniforms, long pants and T-shirts,” he says. The rescuers try to remember to remove their shoes, radios, cell phones and wallets beforehand.

Some of Keeley’s most difficult situations have been boat and personal watercraft accidents not far from shore.

“Most of them happen right off Tubbs Hill in Lake Coeur d’Alene. There are usually multiple injuries with people in the water, screaming for help. I have to pull people out of the water or go in after them,” he says. “Then I have to take care of them.”

Keeley focuses on the injured, administering first aid, while relying on a colleague to handle the boat.

“I need to trust that while I’m in a boat, traveling 30 or 40 miles per hour, concentrating on my patient, the person operating the boat is making decisions to keep us safe. That makes us awfully close,” he says. “The boat engines are screaming, and I can’t hear well as we’re trying to get people to shore. I need to listen to the patient, listen for blood pressure. There’s noise from the wind. In a boat rescue, you have to completely change the way you take care of people.”

Even if the lake or river is calm on a warm summer day, a boat rescue is a formidable task.

“I don’t care if the lake is completely smooth, the boat still bounces all over the place just because it’s a boat. Every wave you go over, your equipment is flying in the air. Open a gear bag, and anything will blow completely away,” he says. “You have to open it up, grab what you want and close it fast.”

And that’s just what’s going on in the rescue boat.

“People in other boats do stupid things. We have lights and sirens on our boat like an ambulance, but people don’t realize that if you pass a fireboat with a patient on it, the waves you make passing it make my job 20 times harder. The patient is moving, and anything I’m trying to do, like start an IV, is now incredibly difficult,” Keeley says.

Add a storm or wind with high waves, and sometimes Keeley may only be able to put oxygen on his patient, explain what’s going on and try to reassure him or her. “I’m not a doctor. I don’t have an x-ray machine or CAT scan. I can treat your immediate needs. I can talk to you and figure out where the problems are, and comfort you,” he says.

Making quick decisions about treatment is key in extreme conditions. Keeley says it’s part of why he loves his job. He finds it rewarding to help people in trouble and to get a chaotic situation under control.

“I have a huge amount of training, and there’s a lot of satisfaction to being able to put it all to use,” he says. “You’re on your own, making decisions. This career doesn’t work well for people who are wishy-washy.”

For him, being a paramedic has been a lifelong dream, ever since he was watching Emergency! on TV when he was 7 years old.

Keeley began his career with the Kootenai Country Fire & Rescue as a volunteer firefighter and worked his way up to take charge of the Emergency Medical Services division last summer. Although he has administrative duties now, he continues to go out on calls.

In a typical summer month, his department will go on three to five boat rescues. The rest of the year they respond to another five to 10 emergency calls on the water. In addition, Kootenai Country Fire & Rescue transports sick and injured people by boat when it’s a faster option than a ground ambulance.

Married for 24 years with two children, Keeley says his own encounters with loved ones’ health issues have given him insight and compassion in his work. “When my wife was seriously ill, I learned a lot about being on the other side of the call. I learned what it’s like to not get information. I make a point now to stop and talk to families — at least give them an idea of what’s going on,” he says.

In fact, that can be the most challenging part of his job at this point in his career. “I can deal with any bloody, messed-up person. I can deal with any mangled body,” he says. “But it’s another thing to tell someone that they’ve lost a loved one, or tell a wife her husband is so traumatically injured there’s nothing I can do. That’s the tough part of the job.”

In spite of the extreme circumstances under which he meets people, Keeley feels a connection to his patients. Sometimes he gets cards or phone calls from the people he’s helped.

“You’d be surprised at the personal bond paramedics and firefighters feel with these folks. I want to know how they did, and whether what I did truly helped them,” he says. “I like it when someone says, ‘I felt taken care of by you.’”