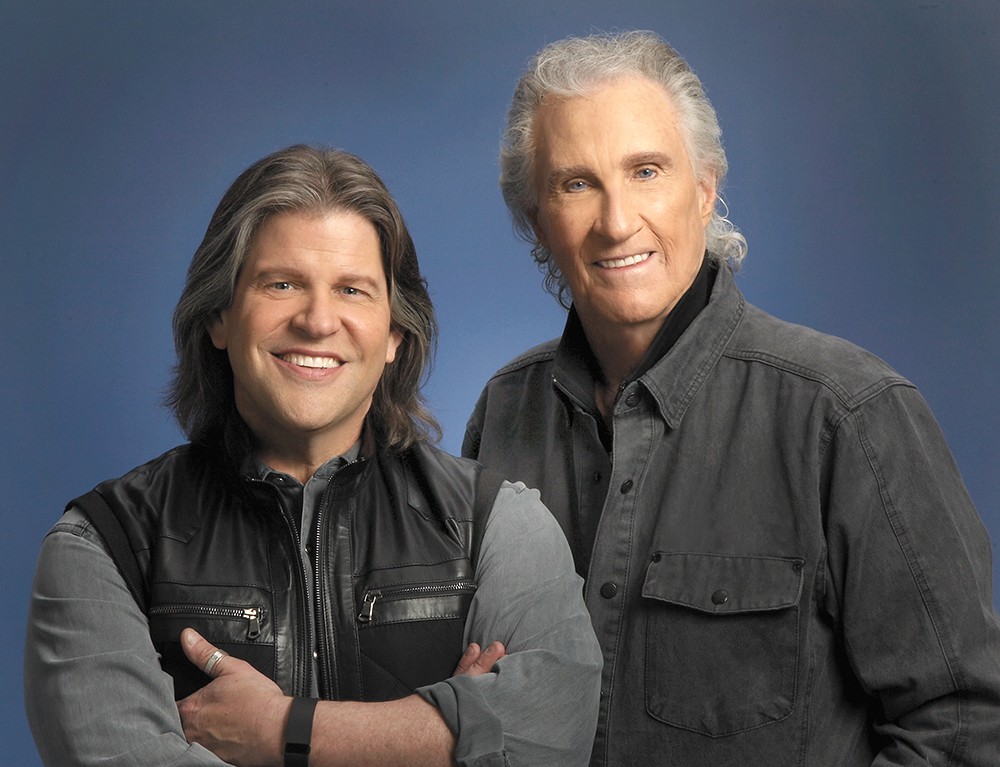 Previously, he didn't think he'd ever reform the legendary blue-eyed soul duo the Righteous Brothers. But that was before he heard former Broadway singer Bucky Heard perform at the Dick Clark American Bandstand Theater in Branson, Missouri, eight years after Hatfield's death in 2003.

"He invited me to see his show, said he was doing a couple of Journey songs," he recalls. "I said, 'Journey? Jesus Christ. Steve Perry is one of the greatest singers.' And he just crushed these songs. When I heard Bucky, I said, 'Wow. If I'm ever going to do this, he would be the guy.' He's a great singer and, almost as important, he became a good friend — somebody I really liked and cared about."

Medley recruited Heard and reformed the Righteous Brothers in 2016, and speaking with the Inlander from Nashville, he reflects on the special connection he shared with Hatfield.

One notable exception is Hatfield's hair-raisingly powerful solo performance on the duo's version of "Unchained Melody," which was originally the theme for a 1955 prison film called Unchained.

"There were only so many duets we could come up with," Medley recalls of the recording session. "So, usually Bobby would do a song by himself, and so would I. 'Unchained Melody' happened to be the song Bobby picked. It was a song we had both loved from the '50s, but there was no discussion of me singing it with him. I wanted to stay out of his way."

The song was released as a B-side to the single "Hung on You," but basically every disc jockey in the nation turned the record over and played "Unchained Melody" instead. It had a second life in 1990 when it was famously used in soundtrack for Ghost with Patrick Swayze and Demi Moore.

"By the end of that year, we were probably hotter than ever," Medley says. "Thank God for the movies. Bobby and I started getting these huge offers to go out and do concerts, so we decided to really put it back together and take it really seriously."

The Righteous Brothers continued performing right up until the duo's road manager found Hatfield's body in a hotel room just an hour before they were set to play a show in Kalamazoo, Michigan. Medley recalls his final interaction with his old friend the night before:

"I remember coming down the escalator to the bar," he says. "The band was going to have a couple of drinks before we went to bed. As I was going down, Bobby was coming up. I said, 'Where are you going?' He said he was going to turn in because he wasn't feeling great. For Bobby to miss a drink, that was pretty amazing. That was the last time I saw him."

A toxicology report later concluded that Hatfield had overdosed on cocaine and suffered a fatal heart attack.

As talented as Heard is, Medley acknowledges there is no replacing Hatfield's friendship — or voice. Medley's bass baritone voice blended with Hatfield's tenor in a special way, and legions of listeners agreed. After all, the duo's 1964 single "You've Lost That Lovin' Feeling" is the most-played song in the history of American radio.

"That's pretty cool, isn't it?" Medley says, chuckling. "That's something you can't wrap your head around. Being in the Rock and Roll Hall of Fame is amazing enough, but there's 300 or 400 people in there. From what I understand, it's about a million airplays ahead of everyone. Someone explained to me that, because of the way radio is today, 'Lovin' Feeling' will probably stay the biggest and most-played record ever.

The original print version of this article was headlined "Unchained Melodies"