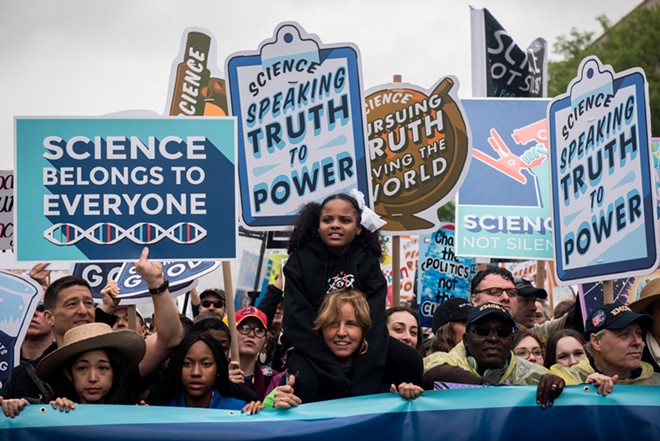 Hilary Swift/The New York Times
Demonstrators during a global March for Science in Washington, April 22, 2017. All presidents over the past two decades have nudged science to support their policies, but a report out of NYU said the Trump administration has driven federal science to a “crisis point.”
By Lisa Friedman
The New York Times Company

WASHINGTON — In a single month in 2017, the Trump administration’s Environmental Protection Agency blocked scientists from speaking at a climate change conference, its Interior Department forwarded a policy letter to U.S. Customs and Border Protection only after deleting concerns from biologists about a border wall’s effects on wildlife, and the FBI issued a crime report that omitted dozens of tables of data on homicides and arrests.

That October was fairly typical for the Trump administration, according to a new report out of New York University, led by Preet Bharara, a former U.S. attorney, and Christine Todd Whitman, who led the EPA for George W. Bush.

Every president over the past two decades has, to some degree, undermined research and injected politics into science, the report said. But, it concluded, “Now, we are at a crisis point, with almost weekly violations of previously respected safeguards.” The report calls for stringent new standards to enshrine scientific independence.

The study, to be formally released Thursday, follows reports that President Donald Trump’s acting chief of staff, Mick Mulvaney, pressured the commerce secretary to rebuke weather forecasters who appeared to contradict the president after he erroneously claimed a recent hurricane could affect Alabama. This summer a State Department intelligence analyst resigned in protest after the White House tried to edit scientific testimony about climate change and then blocked it from being entered into the permanent Congressional Record. For months the White House debated a plan to publicly question the established scientific conclusions about the severity of climate change.

“While the threat to the independence of scientific data did not start with this administration, it has certainly accelerated of late,” said Whitman, a Republican who also served as New Jersey’s governor, in an emailed statement.

A White House spokesman did not respond to a request for comment on the report’s findings.

The authors maintain that, without action from Congress, future administrations of either party could further erode the independence of federal scientific data. Among the changes it recommended was legislation to require that all federal agencies that perform scientific research articulate clear standards for, and report on, how political officials interact with career scientists.

Legislation by Rep. Paul Tonko, D-N.Y., to develop scientific integrity standards has 217 co-sponsors, but none are Republican.