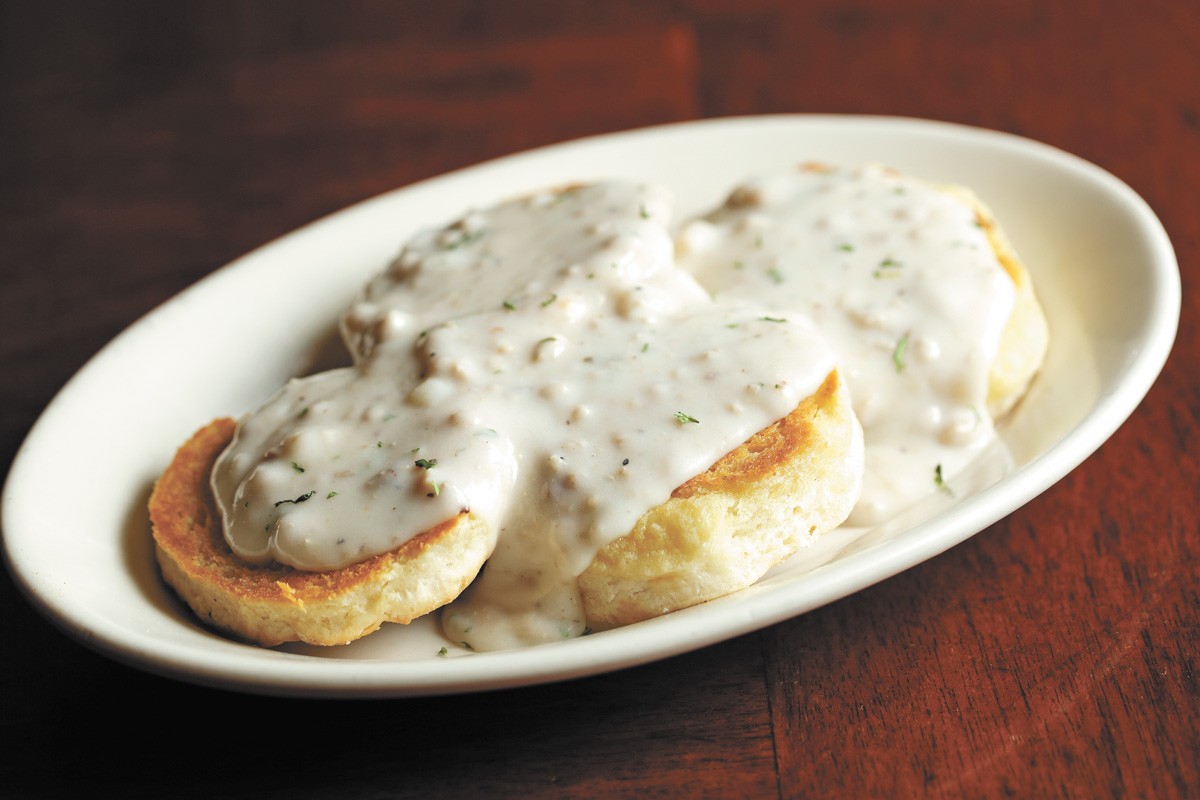 Few other dishes are as classically American as biscuits and gravy. It's a humble and hearty dish, and can be eaten any time of day. The dish's origin is thought to date back as early as the Revolutionary War, but surely its roots are in the South, specifically Appalachia. The meal was cheap and calorie-dense fuel for laborers, and that creamy gravy helped make the blander, harder biscuits of that time more palatable.

While pretty much any diner, breakfast or brunch spot has this American culinary staple on the menu, variations are plenty. Some places make everything from scratch, while others may rely on pre-mixed or made biscuits, gravy and/or sausage. For this Inlander food roundup, we opted to check out the biscuits and gravy at a handful of spots frequently recommended online by fellow foodies and B&G connoisseurs, since we already know that places like Chaps, the Yards, Bruncheonette and other top-rated spots do the dish well. (CHEY SCOTT)

What better way to feel like you're eating in an old-timey greasy spoon diner than to eat in a 115-year-old train car that's been serving up food in Spokane for 90 years? It feels old-timey because it is! Go with a small group and get a booth in the back, or belly up to the wooden bar and admire the detailing as you watch the short order cooks whip out plate after plate of delicious food. From eggs benny to burgers and fries, you'll find all the diner dishes you'd hope for from breakfast to dinner. Biscuits and gravy are found under "Nana's Way" on the menu, and as promised, it's a good old-fashioned, no-frills plate of exactly that. Two biscuits warmed on the flat top grill and cut in half get topped with a heaping serving of sausage gravy, and you can order them all day long. This writer couldn't make it through the whole plate, but if that's still not enough to fill you up try adding a side of hashbrowns ($4.75) or fruit ($4.50). (SAMANTHA WOHLFEIL)

Gravy, when you think about Thanksgiving meals or something atop a steak, is usually liquid enough to be poured from a container. Not so at Old Mill Bar & Grill, where the gravy on their biscuits is slathered rather than poured. The thick mass is dotted with black pepper and chunks of sausage, not overly salty and surprisingly creamy. Underneath the mountain of savory "sauce" are two open-face biscuits that manage to maintain a crisp bite despite the load of gravy they bear. The biscuits are wider than they are tall, with a fairly open crumb versus flakiness and a slightly buttery golden exterior. It's not fancy, but it is plentiful and the perfect pairing with a couple of eggs cooked to order, a bottomless cup of good coffee (or a red beer) and dished up by the friendliest servers in town. (CARRIE SCOZZARO)

Nestled in Felts Field, it's exciting to look out the window of the Skyway Cafe and see vintage planes taxi and take off every few minutes. Inside, model planes dangle from the ceiling, aviation-themed license plates dot the walls, and even the overhead fans are model plane propellers. But going to the Skyway Cafe isn't just a visual experience: They also serve damn good food. The 1/4-sized plate of biscuits and gravy was enough to feed an NFL linebacker — I can't begin to imagine what the full-sized portion looks like. On top of the sheer quantity, quality was also delicately considered. The gravy wasn't too heavy, thanks to the bright notes of sharp black pepper and the perfectly spicy bits of sausage. The biscuits were fluffy enough to soak up the gravy, while simultaneously having that perfect amount of crunch, preventing everything from becoming mush. This plate of biscuits and gravy may seem like too much to eat at once, but after your first bite you won't even consider not devouring it all — it's that good. (JAY McGREGOR)

Jimmy's Down the Street

There's nothing that endears me to a restaurant more than seeing — in that glorious moment when the food arrives at my table — that the restaurant has allotted me generous portion sizes. Laying eyes on Hogan's Diner's biscuits and gravy for the first time was euphoric precisely for this reason. My takeaway: Bring a friend! (Or anticipate a to-go box, and enjoy the promise of tasty leftovers later.) Hogan's gravy, while pretty standard in terms of overall flavor, spiced things up a bit by sprinkling paprika into the mix, lending a pleasant kick to some bites. And the two buttermilk biscuits were grilled rather than baked, which added a nice crunch to the dish's texture. I enjoyed the meal, I enjoyed the fun and friendly service, and I absolutely loved the colorful, retro diner feel that Hogan's has. Sitting in a red-leather booth at Hogan's and ordering breakfast on a sunny morning was like being thrown back to the '50s in the most adorable way possible. (HANNAH MUMM)

Hangry's is a traditional diner with a no-frills, old-school vibe offering classic American staples and breakfast all day. I've seen both Hangry's biscuits and gravy and its burgers recommended frequently on social media, and had to see what the hype was about. Located in a small building along East Trent, Hangry's has a small dining room and several outdoor picnic tables. While neither the biscuits nor the gravy are scratch-made, our server tells us, the dish came out hot and heartily portioned, with two open-faced, toasty biscuits smothered in creamy, peppery, country-style gravy. I added sausage to mine for a slight upcharge, because in my personal opinion sausage with B&G is required (for non-vegan/veg people, anyway). While the biscuits alone would have been filling enough, the special also comes with a side of crispy hash browns and two eggs, which I couldn't finish. If B&G isn't your thing, Hangry's has tons of house specialty burgers and all the traditional diner fare (milkshakes!) you'd expect. (CHEY SCOTT) ♦

Speaking of Round Up , Breakfast