Mastodon gets better and better with every record. 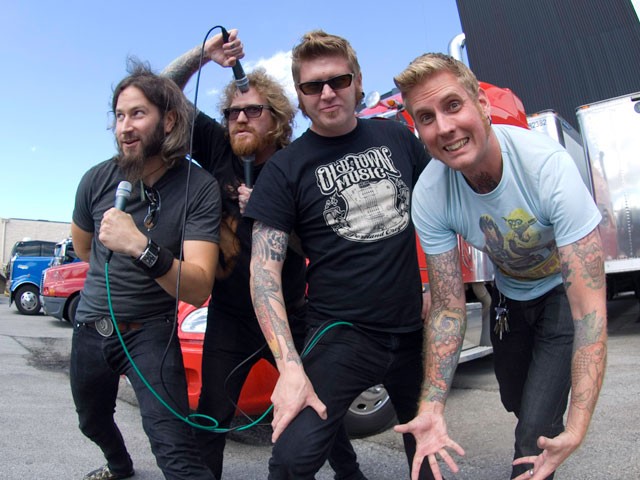 Just hours before their guitarist’s brain hemorrhaged, putting him in a three-day coma, Mastodon had finished one of the most important and high-profile performances of its career — playing “Colony of Birchmen” at the 2007 MTV Video Music Awards with Queens of the Stone Age frontman Josh Homme.

Though the story has never been set straight, Brent Hinds was drunk, got in a fight with a member of System of a Down and ended up in a coma from it.

“We were all pretty upset and shaken by it,” Brann Dailor, Mastodon’s drummer, says. “We didn’t know the full extent of the injuries. But I don’t think it was too long after when we received good news that he would be fine, and he was talking to us on the phone. It was OK, and we knew that everything was going to be fine.”

Dailor says he’s not sure that Hinds’ saga changed the metal band’s perspective overall — but he suspects it filtered into the musical direction of the band’s epic 2009 record, Crack The Skye, more than they realized.

“Would we have written the same exact record? I’m not sure. I have no idea,” Dailor says. “This did happen. And I think that the frustrations with going through something like that — something that was widely publicized and obviously kind of embarrassing and hurtful in all those ways — that’s going to be something that’s felt deep down inside. And obviously when you’re creating art, those frustrations and things are usually going to find their way to the surface and manifest themselves probably in song if you’re a guitar player. So, yeah, I can hear it in there.”

The incident hardly stunted the band’s growth. Their next record, Crack the Skye, is an album being hailed as a new classic in heavy metal — showcasing the already-talented band at a new level musically and lyrically. Last spring, Rolling Stone called them “the greatest metal band of their generation — no one else comes close.”

Crack the Skye — a full-blown concept album (with lyrics primarily written by Dailor) — revolves around a fantastical and complex tale. While still plenty heavy, the seven-song record brings out a prog-rock side of the band as they roar through the multi-faceted arrangements of tracks like “Quintessence,” “The Czar” and the title track, displaying their talent for creating potent melodic segments along the way. Dailor says the album is about a crippled young man who experiments with astral travel, gets too close to the sun, where his golden umbilical cord gets burned off, sending him flying into a wormhole.

There the man converses with spirits, who decide to put his spirit inside of the Russian mystic Rasputin. He then accompanies Rasputin through his taking of the throne of the Russian czar and his own murder, after which the spirits of the young man and Rasputin fly out through Rasputin’s body, through a crack in the sky before returning back to the crippled man’s body.

“Those are all just topics that interest us,” Dailor says. “Obviously it’s all metaphoric for personal things, but it’s masked in such a cool story, I guess.

“As far as we’re concerned, it’s cool. Other people might feel it’s geeky or whatever, but I like it.”

The memories hidden in the scent of a record store