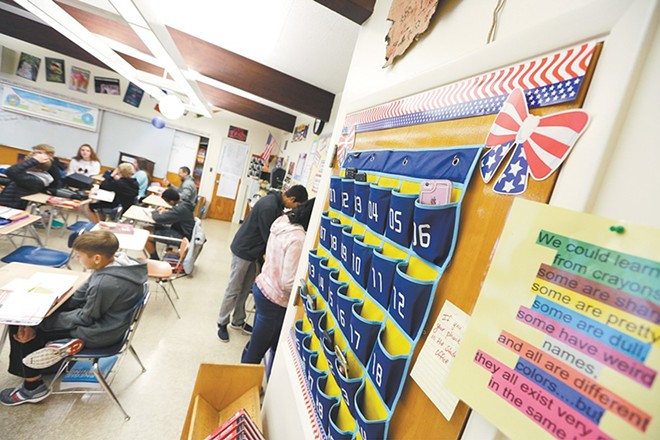 In their eighth-grade social studies class at Sacajawea Middle School, twins Emzayia and Zyeshauwne Feazell couldn't believe what was happening. Their teacher said the class was going to do a "fun activity," Emzayia recalls. Then the teacher brought out some freshly picked cotton for the entire class.

"When she gave it to us, I was like, 'This is not right,'" Emzayia tells the Inlander.

All of the students were asked to clean cotton as part of an assignment on May 3. Spokane Public Schools spokesperson Sandra Jarrard says the lesson was about the Industrial Revolution and discussed the cotton gin, but the school district has refused to offer any more information about the lesson. She says a third party is conducting an investigation into the incident.

The 14-year-old twin girls, meanwhile, say they felt alienated and humiliated. They were two of three Black students in the entire class, and they say they were uncomfortable by other students making remarks that they couldn't believe Black people had to clean cotton as slaves.


The controversy comes at a time when Spokane Public Schools is working on its "equity policy," stemming from a racial equity resolution passed last year by the school board.

Emzayia tells the Inlander that during the lesson, the teacher explained how the cotton gin increased the demand for slaves. The teen says she was offended by having to actually clean the cotton, and she was upset that the teacher didn't do anything about the other students making comments about it.

The twins' mom, Brandi Feazell, tells the Inlander that when she called the school and talked to a principal assistant, Taylor Skidmore, he was dismissive and defensive.

"He incited the situation to be worse and defended the actions of the teacher," Feazell says. "He called me back later and said the best that he could do for me and the girls was that he could 'segregate' my daughters out of the classroom into a room all by themselves so they would not be around the White teacher anymore."

Brandi Feazell is asking for Skidmore to be removed from his position, and for the teacher and other school administration to face discipline for not taking the incident seriously. The family also wants a formal, public apology from the school district, along with anti-racism training to be implemented. She adds that the racial equity resolution needs to be implemented districtwide now.

Sacajawea — a school with a Black student population of only 3.3 percent — isn't the first school in recent years to be criticized for asking students to pick or clean cotton. In 2019, parents in South Carolina were enraged when the class was asked to pick cotton and sing slave songs while on a field trip. In New Jersey last year, a teacher was cleared of any wrongdoing after allegedly asking eighth-grade students to pretend to be slaves picking cotton as he made whip-cracking noises in the classroom.

In Flint, Michigan, a parent successfully forced a middle school to remove a cotton picking lesson from an eighth-grade class in 2019. That exercise was based on a lesson called "Cotton Classroom," a lesson plan from a website called cottonclassroom.com that said it was a "hands-on lesson" that is a "unique approach to teaching about the Industrial Revolution, the importance of Eli Whitney's cotton gin, and the difficulty of slavery." The lesson has since been removed from the website, and the teachers who designed it offered an apology saying that "Cotton Classroom recognizes the unintended harm done from a previously posted lesson outline," and they encouraged educators to "engage in a robust dialogue about how history is taught and how it affects people today."

Jarrard, the district spokesperson, repeatedly declined to say whether the lesson has been taught before in Spokane Public Schools. She instead repeated multiple times simply that the students were learning about the Industrial Revolution and the cotton gin was discussed. The eighth-grade Sacajawea teacher who taught the lesson didn't return an Inlander message seeking comment, nor did Skidmore or the Sacajawea principal, Jeremy Ochse.

Jarrard said there were “conflicting reports” about what took place in the classroom and that the school district “looks forward to sharing the outcome” of the third-party investigation. She says the investigation started May 17, two weeks after the incident.


Brandi, however, was first contacted by the third-party investigator on May 28, just after media members called Spokane Public Schools about the incident, says Dan Ophardt, an attorney with child advocacy group TeamChild. Ophardt provided the Inlander with an email sent to Brandi on May 28 in which the investigator introduces herself. Another email on June 2 suggests the investigation hadn’t begun yet: “I know the Spokane School District is eager to begin the investigation process, but I would prefer to interview you and your daughters first before moving on to other witnesses.”


Ophardt says he’s surprised it took the district this long to begin the investigation.


“I welcome transparency, and I am glad that Brandi and the girls got it, but it appears to be from the media pressure the district was feeling,” Ophardt says. “If the district was doing something internally [before that], that wasn’t transparent.”


Ophardt has represented another former Spokane Public Schools student who has alleged Skidmore was racist toward him.

Quincy Marin, 24, says that in 2015 he tried to enroll at Lewis and Clark High School, where Skidmore was an administrator at the time. Marin, who is Black, says the administrators initially told him he couldn't enroll there. They later changed their mind, but Marin says Skidmore commented on his clothes — a hooded parka and boots — and told him that he was initially stopped because "when someone like you comes into the building nothing ever goes right." Marin tells the Inlander that he never experienced "such a bold presence of racism" before that day.

"I'll never forget him telling me that," Marin says.

Weeks later, Skidmore emergency expelled Marin during the homecoming dance following a verbal dispute with other students, court documents say. Skidmore alleged that Marin threatened him, but Marin says he only threatened to report Skidmore to the school board if he "put hands" on him.

Marin argued in court that the school district violated state school discipline rules and violated his right to free speech by suspending him for protected speech. Spokane Public Schools eventually agreed to pay $10,000 to settle the case, Ophardt says.

Marin says he never returned to Spokane Public Schools after that and "the whole experience ruined my life." He says the district has a racism problem that's bigger than any one administrator.

When asked about the middle school students at Sacajawea being asked to clean cotton, Marin says "that would be offensive to me."

"I understand the learning method, but there's so many other demonstrations, so many other ways of teaching slavery," he says. "Just imagine if the tables were flipped and you were asked to do something humiliating in front of people who are different from you."

Jarrard, with Spokane Public Schools, would not say whether any teacher or administrator has been disciplined or put on paid leave while the third-party investigation is underway.

The twin girls, meanwhile, haven't been back to school since the cotton lesson.

"My daughters currently would like an actual safety plan — emphasis on the safety — in order for them to return to school," Brandi Feazell says.

She says she remains disappointed with the way Sacajawea and the school district have responded to her complaint.


"I was really hoping that it wasn't going to be just dismissed," she tells the Inlander. "I was hoping they would say 'this is unacceptable, period, and we as the district are taking action with the teacher, directly,' and then start some momentum on other action being taken — not for it to fall on deaf ears."


UPDATED JUNE 8, 2021: This report has been updated to clarify when the district started its investigation.

This isn’t the first time Taylor Skidmore, most recently Sacajawea’s principal assistant, has been accused of being racist toward a student.


Quincy Marin, 24, says that in 2015 he tried to enroll at Lewis and Clark High School, where Skidmore was an administrator at the time. Marin, who is Black, says the administrators initially told him he couldn’t enroll there. They later changed their mind, but Marin says Skidmore commented on his clothes — a hooded parka and boots — and told him that he was initially stopped because “when someone like you comes into the building nothing ever goes right.” Marin tells the Inlander that he never experienced “such a bold presence of racism” before that day.

Weeks later, Skidmore expelled Marin during the homecoming dance following a verbal dispute with other students, according to court documents in a lawsuit against the district challenging the expulsion. Skidmore alleged that Marin threatened him, but Marin says he only threatened to report Skidmore to the school board if he “put hands” on him.