A quick, combative and undemanding fighter. 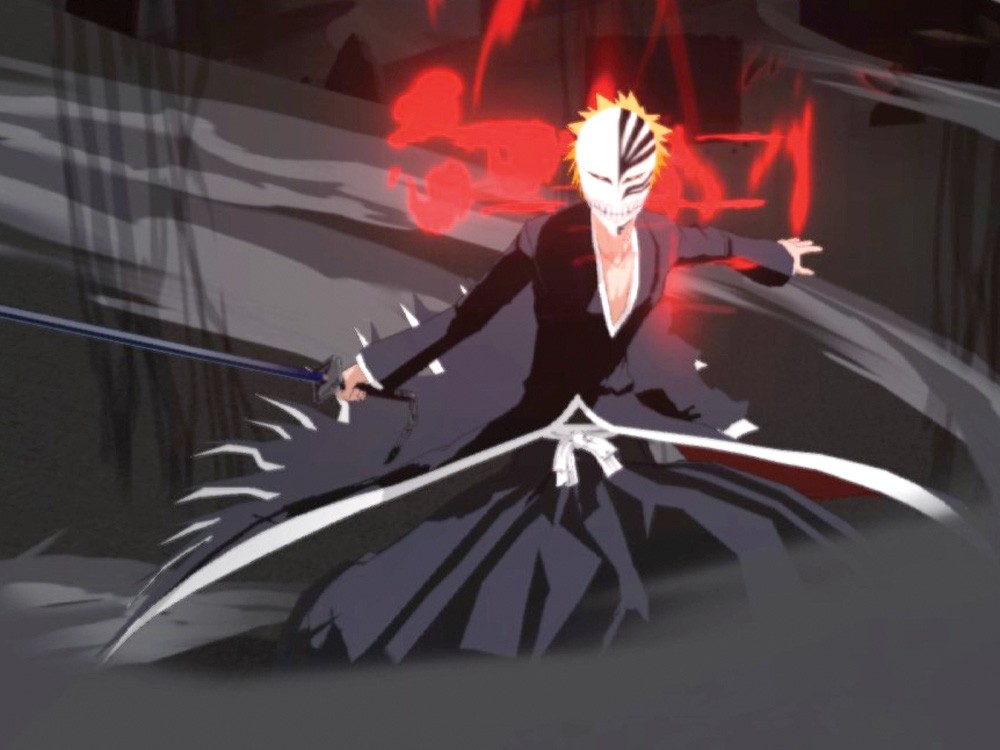 It don't matter if you're black or white.

I know nothing about the anime series Bleach. At first I thought my ignorance would help me. I thought that I’d be able to play the game without complaining that they modeled the spikes on the hero’s hair wrong, or forgot to include my favorite character. I thought I could focus on the gameplay.

Bleach: Soul Resurrección is a “beat ‘em all” game modeled on the popular Dynasty Warrior series. What that means is that the characters wander through blank, featureless tundras or castles until they encounter a swarm of enemies. Then the fighting commences, with swords slashing in bright semicircles and characters leaping into the air, hanging suspended for a moment, then crashing tumultuously to the ground.

Instead of requiring me to tap-dance all over the controller with my thumb as I cue in special combo attacks, Soul Resurrección allows me to focus on a single button. It’s quite intuitive and not a bad idea. I just tap a lot, very fast, on a single button, and my powerful attack happens. At first I thought it was overly simple, but I quickly found it to be a naturalistic system. Just get frantic and the game responds.

I thought I wouldn’t need to know anything about Bleach, especially with such an expedient combat system. What I wasn’t counting on is the fact that Bleach is a 21st Century story. It’s a vast, ongoing story that is being told on TV, in print, videogames, fansites, forums, cellphone apps, cereals, energy drinks, etc. Each chunk of the franchise unfolds the world of the story a little bit more.

Normally, my eyes glaze over when games tell me: “After the war at the Soul Society, Ichigo Kurosaki returns to the World of the Living. However, Aizen has used the Hogyoku to create Arrancars, plotting a new invasion.” But I began to be curious about the mythology of the world of Bleach, where characters seem to be divided into the “black” guys and the “white” guys, and when they’re powered up they tend to be both. The main character throws on a mask that’s split down the middle like a sloppy black-and-white cookie.

This doesn’t mean that Soul Resurrección requires an advanced understanding of the anime. But the straightforward combat system will allow fans of the anime to enjoy Bleach in a more interactive medium than TV. And for gamers like me, who know nothing about the franchise, Soul Resurrección puts on a good enough show.

THE GOOD: This is a game for short attention spans. The nonstop combat is matched up with a whirlwind sequence of episodes. The “story mode” is almost indistinguishable from the “missions” that can be played separately, all of them quick, combative and uninvolved.

THE BAD: Soul Resurrección has the bleached-out, soulless look of empty digital space. I understand that the emphasis in anime is on characters, but videogames excel at presenting virtual worlds. To ignore that is to miss a great opportunity to enhance the Bleach franchise with immersive storytelling.

THE BOTTOM LINE: Despite its pretentious name, Bleach: Soul Resurrección is a quick, combative and undemanding fighter.