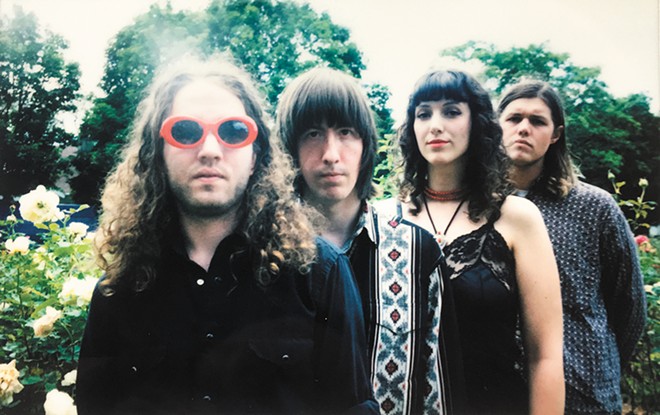 Adria Ivanitsky photo
The sounds of the '60s come through loud and clear in the work of Portland garage rock quartet the Shivas.

The Shivas have a knack for blending sunny-sounding surf-rock with weird, off-putting lyrics, juxtaposing light and dark in a manner similar to the Beatles' "Maxwell's Silver Hammer" and Beck's "Girl." Playing with contrast has been part of the Portland band's style since the current lineup solidified back in 2009, says guitarist and lead singer Jared Molyneux.

"At first, we didn't realize that was happening," he says. "We just played and that's what came out, but it seems to still be happening, you know? Sometimes the music takes a dark turn, too, or sometimes it's the opposite — the song is dark and the words are, believe it or not, kind of happy. But yeah, it's safe to say that's a continuing theme throughout this project."

The Shivas are rounded out by drummer Kristin Leonard, bassist Eric Shanafelt and guitarist Jeff Boyardee. Speaking with the Inlander ahead of their upcoming Spokane show, Molyneux says the band is in the process of mixing a new, full-length studio album. He describes the music as more of the same straightforward rock 'n' roll the band has always delivered, emphasizing guitars and vocal harmonies — and not thinking too much.

"More than anything, we try to let whatever is going to come out, come out and kind of turn off our brains," Molyneux says. "Which probably sounds pretty lackadaisical, but it's an attempt not to overthink everything."

The group took its time on the project, striving to record in a comfortable environment — in this case, a friend's studio in Portland. They didn't want to worry about spending too much time and money; they just wanted to lay down tracks. As per usual, they recorded live together in the same room rather than isolating instruments in an effort to capture the Shivas' electric stage energy. They have no qualms with overdubbing vocals and instrumentation after the fact, but they try to produce as much sound as possible in one take.

"It's kind of a weird thing — recording records and playing shows are such different enterprises," Molyneux says. "There are so many things you could have totally down on the recording, but then it doesn't work at all for the live show, or vice versa. We've always been a very active live band, and we try really hard to bring that energy to the records, but it's tricky. Some songs just work a lot better live."

They've historically relied on analog recording technology, favoring one-inch tape over digital means, but not necessarily because they're shooting for a vintage sound.

"We're not trying to make it sound old or anything like that," he says. "You can make it sound modern whether you record on tape or digitally. Actually, there is less to do during the mixing process when you record it that way, because it already has a certain sound, you know?"

Onstage, the Shivas come across as a lean rock band that whips up a hell of a lot of energy. In the studio, a rotating cast of characters helps fill out the sound. Indeed, Molyneux says it takes a village to keep the band up and running. They have always leaned on their wider network of friends for support, whether that be crashing on a homie's floor or recruiting them to play a weird instrument.

"It's fun to work with new people, especially when you include your friends in what you're doing," he says. "We lay down all of the basic tracks, but a lot of people come in and add their own things here and there. I think that gives our music a lot of its character."

The Shivas have become aware of their tendency to add rainclouds to otherwise bright, happy-sounding songs. So now they intentionally balance light and dark, playing off both in creative ways, but they don't want to be blatant about it.

"We want those two sides of ourselves to be suggested, but not overwhelming," Molyneux says. "In terms of lyrics, it's always just been there. We haven't needed to try a lot, it just happens." ♦