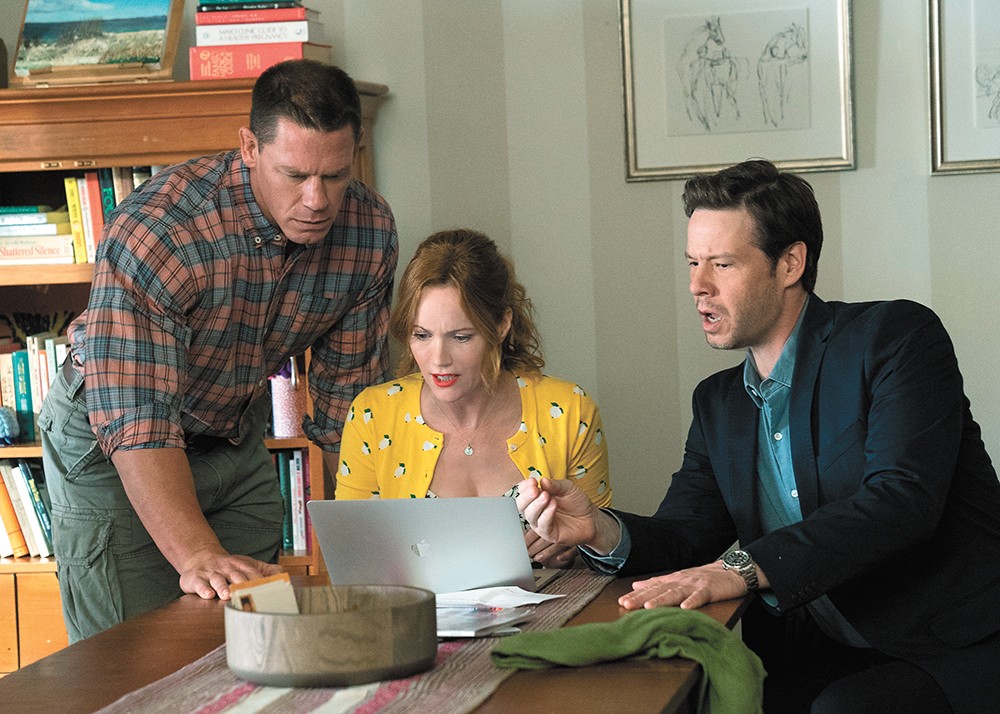 Here's the premise for Blockers.

Three parents discover that their daughters, fast friends since kindergarten, have vowed to each lose their virginity on the night of their senior high school prom. And, by god, those parents are going to stop them.

We do not need more of this anti-sex junk. We need movies about teenage girls acknowledging their sexual desires and pursuing sex like we've seen teenage boys do on-screen since forever. We need movies about parents who trust their daughters with their own bodies. We need movies about happy, pleasurable, mutual, relaxed, comfortable sex between enthusiastic consenting partners who might be madly in love or maybe just looking for some fun.

And, wonder of wonders, that's what Blockers actually is. Color me astonished.

Not that this is a perfect movie. Far from it. The way it's structured is definitely odd: The parents at first appear to be the protagonists who have our sympathy, and then develop into the villains of the tale. I suppose the concept could theoretically work, but that swing never gels here.

But more worrying is that I don't think screenwriters Brian and Jim Kehoe (this is their second script together after 2005's Overachievers) know whom their story is for. Who is the audience for Blockers? Is it adults who need a wake-up call in their relationships with their teens? Is it teens who wish Mom and Dad would have faith in their decisions? Is it meant to be fun for the whole family (leaving the real little kiddies at home, of course)? I think that last one is wildly optimistic, given how we're all just starting as a culture to get comfortable with the whole sex-positive thing.

That said, director Kay Cannon — the Pitch Perfect creator and screenwriter making her directorial debut — has assembled a thoroughly delightful cast to enact this confused but well-meaning scenario, and they make it just about worthwhile.

Lisa (Leslie Mann) is single mom to Julie (Kathryn Newton). Hunter (Ike Barinholtz) is the absent dad to — but trying to be more involved with — Sam (Gideon Adlon). But the very best pairing is John Cena's overly sentimental, overprotective dad Mitchell and Geraldine Viswanathan's Kayla. Cena has become an unexpectedly sweet screen presence, and he has a real knack for both projecting vulnerability and pulling off physical comedy. Viswanathan is an absolute find: She just about steals the movie with Kayla's breezy charm and rock-solid assertiveness.

The girls all have great chemistry with one another, too, as the parents do among themselves; it's particularly gratifying to see an adult friendship between a man and a woman that is not in the least bit about romance, as Mitchell and Lisa's relationship is. It all makes for a far more genial ensemble than you might expect, given the raunchiness on display, which is often (in these sorts of movies) a substitute for honest emotion.

But there's plenty of genuine sentiment happening here. I also love the casual way in which interracial relationships are handled, just completely without commentary, because it's not needed. Mitchell's wife, Marcie (the awesome Sarayu Blue) is Southeast Asian, and Sam has a black stepdad (the awesome Hannibal Buress).

I wish the film hadn't felt the need to resort to the occasional bit of gross-out humor: It adds nothing and detracts from the larger humanity of the story it wants to tell, about finding more pleasure and confidence in our bodies, not being squicked out by them. Still, baby steps. ♦

The original print version of this article was headlined "Sex Positive"

Blockers is not showing in any theaters in the area.