Actors from Legally Blonde defend themselves against an arrogant prosecutor. 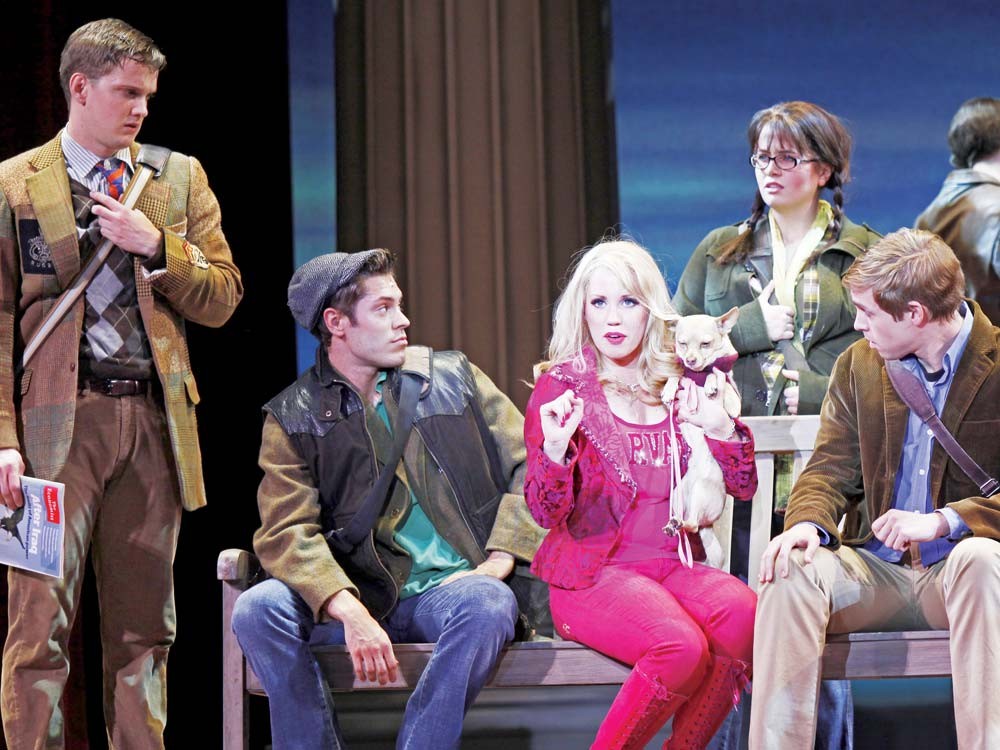 Snooty theater critics like me don’t favor shows that just cash in on popular movies’ name recognition. How can actors even bear appearing in them?

Snooty Theater Critic: Legally Blonde is just a chick musical. There’s nothing in it for straight men.

Kahlil Joseph (Professor Callahan): I can understand that a straight man might scoff at a seemingly girly show that appears to be about fashion, makeup, beauty spas, sororities, Chihuahuas and the color pink. But in actuality, I believe that a straight man (myself included) can indeed enjoy the story, though in different ways from other demographics. There is plenty of comedy to be found in the highly ditzy behavior of Elle and her sorority sisters (the things they say, the thoughts they have, the ways they behave); the high-pitched voices spouting out California-speak; the superficiality of some rich, spoiled people.

Nikki Bohne (Elle Woods): After our Reno show, I was approached by a gentleman in his 40s, who had dragged his wife to see his “favorite musical” for the third time. I was a bit curious as to what the attraction was. It’s because this musical is fun and witty. The writers have created a story that flows and allows for an opportunity to escape from your problems for a few hours, while we do the work (in 4-inch heels!).

Legally Blonde doesn’t pretend to be something it isn’t, so I can’t say that the average football-watching, barbecue-grilling, All-American man is going to beg his wife to come see this show. But if my dad, who is about as athletic and manly as they come — he knows how to cook one meal: bratwursts — can sit through more than 20 performances of this show and still belly-laugh at “Gay or European” [the show’s song about gaydar], then I think most men will find joy and fun in Legally Blonde.

Elle doesn’t actually study or do any hard work. So doesn’t this fairy tale for girls just reinforce the false notion that if you’re just, you know, “true to yourself,” you can succeed at anything?

Joseph: Legally Blonde, I agree, is a fairy tale. And we all know that fairy tales are ideal events in a utopian scenario. But it’s inaccurate to challenge this fairy tale as reinforcing that kind of “false notion.” Parents with good skills always ensure that their children can separate fiction from truth.

Also, Elle does indeed start to study during law school after she gets laughed out of the party for showing up in her bunny costume. With the help of Callahan’s protégé, Emmett (in the song “Chip on My Shoulder”), she starts to slowly abandon her Spoiled Little Princess mentality for a more industrious one. Her studying is simply not covered very extensively.

Bohne: Obviously, the nature of a Broadway musical doesn’t allow us to spend hours and hours showing the audience that Elle studied for the LSAT, but we do see throughout “What You Want” that Elle gives up her entire senior year preparing for this test. She doesn’t attend the parties and takes several practice tests in order to achieve the needed score to attend Harvard. She works hard and applies herself in order to accomplish her goal.

A common misconception about Elle Woods is that she was always a dumb blonde who somehow learned to make something of herself simply by applying her “gaydar” or knowledge of perm maintenance to one specific case. That’s not so — Elle was always an intelligent person who was simply raised in an area where her knowledge was applied to fashion or grooming. She was a leader in her sorority and always maintained good grades. Hard work isn’t something that was foreign to her.

Yes, this musical has a primary message of believing in yourself and staying true to who you are, but Elle proves that it comes with hard work ... and a whole lot of Red Bull.

All the other characters are just cartoonish stereotypes. Elle’s the only rounded character, and she’s not as smart, quick-witted or open to self-change as some people contend. So how can we like the show if there’s not much to like about the main character?

Bohne: I remember an interview with Reese Witherspoon when she was first developing her character for the movie. She said, “When I read Legally Blonde, I was, like, ‘She’s from Beverly Hills, she’s rich, she’s in a sorority. She has a great boyfriend. Oh, yeah — she gets dumped. Who cares? I still hate her.’” So Reese made sure she was the kind of character you can’t hate. She isn’t just a ditzy blonde but a woman of compassion and love. She is optimistic, unjudgemental, and she sees the good in everyone. You cheer for her because she is simply a good person.

We love her long before she stands up to Callahan. We love her because she is a woman who knows what she wants and goes after it, no matter how silly the motive may appear to the audience.

Joseph: I strongly disagree about my character, Professor Callahan, being a cartoonish stereotype. I play him very differently from previous actors. Here’s one big difference — I actually am a former professor at UCLA’s School of Theater, where I taught voice and speech. So I bring a different authenticity to my role.

A smart viewer will indeed be drawn to my formidable Callahan for the character’s charisma, power, bravado, intelligence, danger, sharp wit, unpredictability, condescension, cold-as-ice demeanor, charm, and likeability (until the end). This Callahan will not be stereotypically creepy. You will respect him and he will keep you on edge through the show. You will actually like him at certain points. He will remind you of someone you might know or have worked with. You may not have been fond of him, but you took him very seriously. He will definitely keep you watching. And my Callahan will get you so involved that you will applaud when he gets what he deserves.

The movie depended on Reese Witherspoon’s appeal. Nikki, how will your performance be any different?

Bohne: Elle Woods in the musical is a bit quirkier and has more spunk than she did on the screen because acting styles tend to be a lot bigger onstage. I am also quite a bit younger than previous Elles have been, and I approach it from a more youthful, straight-out-of-college. Having just finished my undergrad last April, I am right on track for the exact age that Elle would be in real life.

I will only be a second-rate copy of Reese Witherspoon if I simply try to recreate her performance onstage. And while I don’t have an Academy Award and several blockbuster movies under my belt, I can be a pretty good Nikke Bohne.

Joseph: By the way, I really did appreciate this kind of challenge. I like the opportunity you gave us to win you over.

Critic: I enjoyed it, too. And you won me over — a little bit. While the opening “Ohmigod” number — with its silly-girly, repetitive obnoxiousness — makes me want to run out of the room screaming, there are at least a couple of ways in which the musical improves on the movie. First, the hairdresser-sidekick, Paulette, is characterized in “Ireland.” In the movie, she’s standard and faceless. But her sung desire to travel, in the musical, becomes a sort of metaphor for all the characters (like Emmett and Elle) who dream of living a better life. And “Chip on My Shoulder” both gives Emmett the personality that Luke Wilson didn’t get to have in the movie and starts to suggest the kind of hard work that Elle has to do to achieve self-determination (as opposed to just getting “an Mrs. degree.”

As for the rest of Legally Blonde, however, we may just have to agree to disagree.