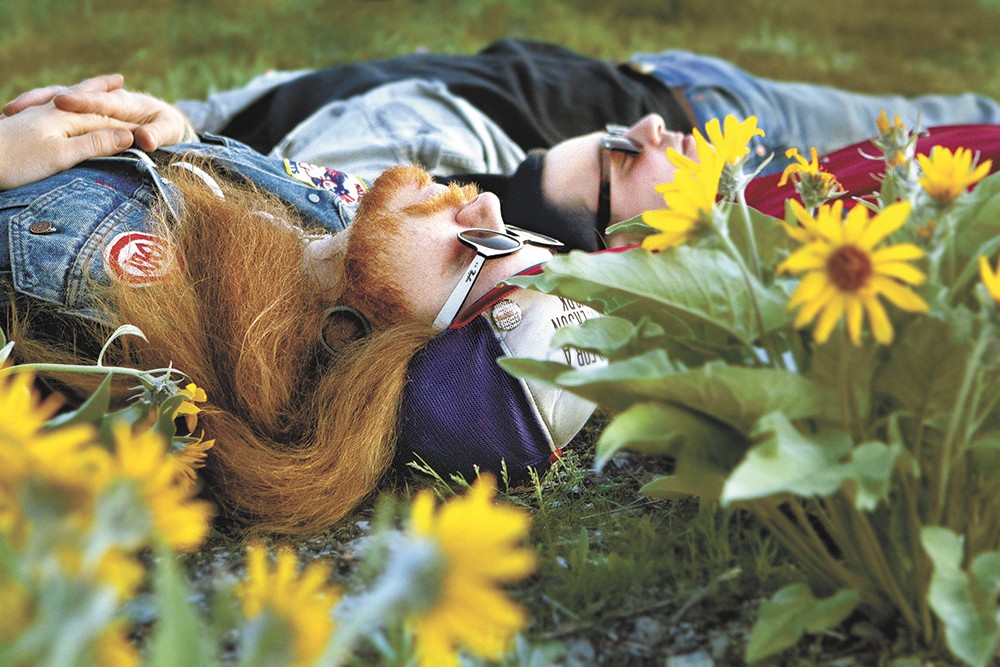 "THEY DON'T CARE ABOUT YOU!" screams Aaron Bocook, bassist and backing vocalist for Spokane punk/metal trio Bloody Gloves, into a microphone at a garage full of worked-up fans.

Tension is building, people are bracing themselves, and now everyone with glasses is taking them off and placing them somewhere safe; Bocook is announcing the name of the next song on Bloody Gloves' setlist, the fantastic "They Don't Care About You."

The screaming feedback blaring from the heavy amplification is the sound of an impending, unavoidable onslaught. There are mere moments before making the plunge. "Ride of the Valkyries" might as well be playing from a helicopter loudspeaker. Surely the napalm will fall soon.

After six punishing seconds that feel like a godforsaken eternity, the bomb drops. The lukewarm concrete venue erupts into inexplicable madness, a sweltering mass of flying fists, stomping boots, and literal blood on the floor. If you weren't already covered in beer, you are now.

According to Bocook, Bloody Gloves is the brainchild of guitarist and lead singer Aaron Rock, but you might not catch his explosive band's demeanor in his relatively mild-mannered approach.

When asked the reasoning behind starting a project like Bloody Gloves, Rock's response is wonderfully honest: "I got sick of going to shows and seeing people just standing there. It kills me on the inside."

"Too many people in this town are afraid to do anything edgy," Bocook chimes in. "There's nothing that I've ever seen here that scared me or shocked me."

He makes a valid point — "safe" music has become a widespread epidemic across all corners of independent music, and not just here. More and more bands are abandoning risk and bold moves in hopes of appealing to a wider audience.

"But deep down, people want to be spit on and screamed at," Bocook says. "They just don't know it."

"And if they end up loving it, then it's an accomplishment to me," replies Rock. "We want to bring out the things in people that they can't control. Music has done that to all of us."

High energy is the dominating trait of Rock's songwriting, but he won't be pigeonholed. Behind the devilish guitar distortion and drummer Derek Watson's furious rhythmic pacing, there are meaningful, calculated songs that stretch beyond typical modern thrash fodder. The band is a willfully nostalgic group of people who, as Bocook puts it, are always "looking backwards" musically, and Rock's lyrics about the world's true evils — like corporate greed — come off as completely relatable in a genre that rarely is anymore.

"We're not comfortable finding the pretty parts of the world and putting a little frame around them," explains Bocook. "The world can be an ugly place."

"Still, no one wants to talk about that all of the time," Rock interjects. "It's about finding a way to almost feel good about it, and come to an understanding."

Ultimately, Bloody Gloves is at heart what any other great punk or metal group has been in the history of the genres: a mechanism for coping with the often terrible world around you. And what a relief it is to have a band like Bloody Gloves in our midst — one that would rather wear its brain on its sleeve than its heart.

VIDEO: Looking back on Volume 2014