Inside a fundraiser for the Spokane River with a famous set of initials. 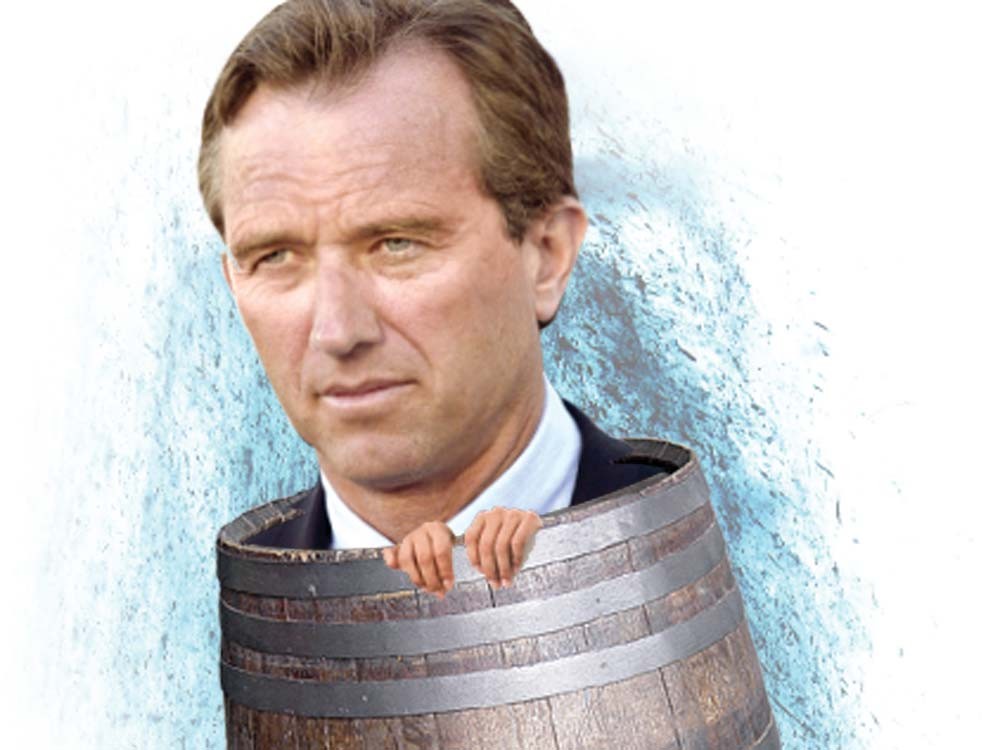 Illustration by Chris Bovey
RFK Jr. will do anything to save the Spokane River.

The draw, of course, is the broad sweep of the Spokane River on the afternoon it reaches flood stage. Thundering, it fills its channel to the brim with a winter’s worth of snow-melt and rain as it churns in white-capped glory towards the downtown waterfall.

Up above this display — in the sixth-floor sanctuary of the river’s-edge condominium that is home to monied Democratic activists Sharon Smith and Don Barbieri — currents of male fashion equally strong to the river’s surged through a certain segment of city leadership and turned everything blue. And all because of the presence of some certain famous initials.

Among the 120 or so guests invited to a private gathering with Robert F. Kennedy Jr. before his Thursday speech at the Fox, there were more grown men wearing sharp blue blazers than perhaps at any other gathering in the history of the city. Young men, old men. Tall men, short men. Coiffed men, bald men. All standing in the classic pose of men at a mingling — one arm bent, the hand cradling a drink, be it a glass of wine or a bottled beer — and affecting nonchalance.

Conservation attorneys and corporate hydropower executives alike were pressed so close at times in the little living room that shoulder blades nearly touched.

And suddenly there he was! Standing by the windows and the modernist gas fireplace, Kennedy faces the crowd to give some remarks. He shares the craggy and iconic face and wavy hair of his fabled clan. He, too, is sported out in a dark blue blazer, matching trousers and a lighter blue shirt with a red-patterned tie.

The room becomes still. The guests lean forward to catch Kennedy’s somewhat hoarse voice over the crash of the river below.

He tells a few jokes at his own expense and then his voice intensifies as he describes the roots of what is now the Waterkeeper Alliance — an international collective of watchdog groups from Alaska to Iraq who fight to clean polluted waterways.

Kennedy’s words fall like punches as he describes the real fight. It’s not a feel-good quest for cleaner water. “Environmental crimes are real crimes,” he says, describing children whose cognitive functions are permanently diminished by exposure to pollutants such as PCBs or mercury.

This is worse than a bank robbery, he says. Corporate arrogance, corporate greed, “To me, this is child abuse.”

Tomorrow, the conservation attorneys and hydropower executives may once again throw jabs over Spokane River pollution issues. But now, in the glow of the evening sun, they stand rapt.

“We don’t get very many people of his magnitude here in Eastern Washington,” says Smith, the hostess, who went for a summery look, wearing a white cotton blouse and tapered, nearly knee-length shorts in a silk blend decorated with a white-on-white pattern of circles.

After the speech, Kennedy heads off to the Fox for his speech, a fundraiser for the local Riverkeeper chapter. The electricity in the condo subsides to a genial hum. Guests, drinks still in hand, mingle and pick at the spicy clam-and-mussel appetizers supplied by Anthony’s.

The seafood restaurant is donating for the first time, and is especially excited, says General Manager Andrew Miller, “because clean water has a direct effect on our restaurant.”

He pauses. He has to run that through corporate to get permission to say these things to the media.

Outside, the river still thunders.