Blue in the Face

Doubling down on regressive gender stereotypes, The Lost Village is a Smurfing disaster 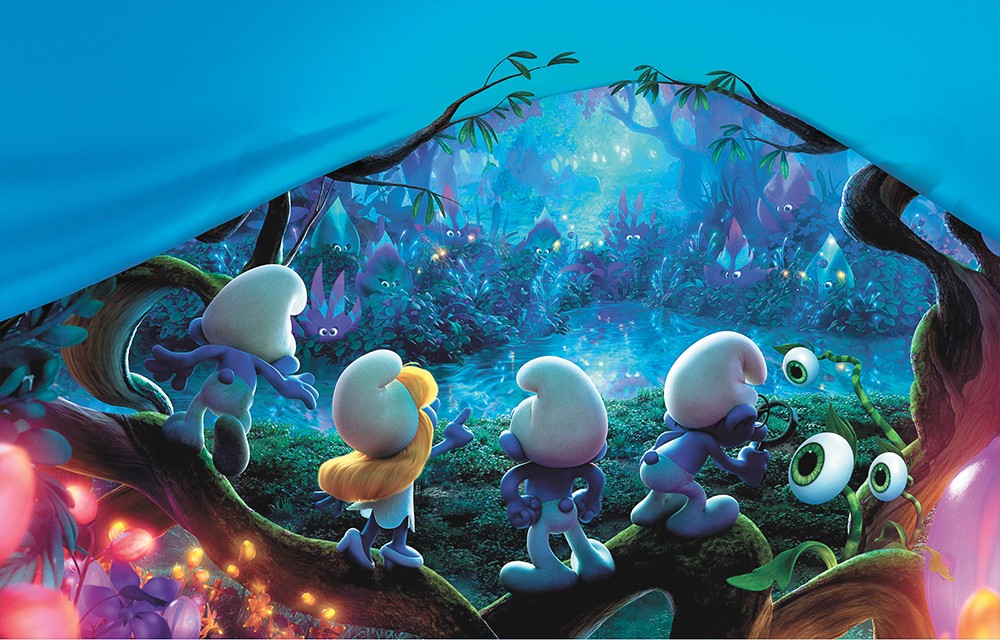 Smurfette takes the lead, but the movie misfires.

The problem with the Smurfs — apart from the fiery rage

they inspire to stomp them into blue goo — is Smurfette. (Typical. It's always the woman who causes trouble.) Created by the evil wizard Gargamel out of clay and sent into the Smurf village as a spy, she's sort of the original sin of Smurfkind: It was only then that the Smurfs realized they were male, and sexual creatures. It's either that, or they already were sexual creatures who were getting it on with one another (not that there's anything wrong with that).

Anyway, Smurfette is now an object of love and lust for 99 male Smurfs (excluding, I guess, Papa). It's impossible to believe that this doesn't cause problems, and that she hasn't completely thrown off whatever balance once existed in the Smurf village. In this sense, even though she is now "good," and no longer an agent of Gargamel, she continues to sow discord by the mere dint of her gender and presence.

(And do not tell me that I'm reading too much into a story and characters meant for kids. There are children's picture books that tell the story of Adam and Eve. People want kids to take these ideas onboard. Our culture is positively steeped in views of women as disruptive to an easy life and as wicked temptresses for men. Kids are paying attention, and crap like the Smurfs reinforces these ideas; this is not cool.)

Smurfs: The Lost Village is all about actively confronting the problem of Smurfette, and it seems to believe it is redeeming the matter. Yet in the process, the movie actually makes this big mess worse by doubling down on regressive gender notions and embracing the gentler form of misogyny that puts women on a pedestal. It may sound benevolent, even feminist, to suggest that women — or female Smurfs, in this case — are better than men, but it isn't.

It's worse, too, that this reboot of the big-screen Smurfs is more strictly for little kids than the 2011 and 2013 films: The horrid mix of live action and animation — and the weird focus on the career and parenthood issues of adult human protagonists — has been replaced by 100-percent CGI cartoon. The little blue monsters are right at the center of an adventure full of junky, juvenile slapstick and animation, full of the sort of color and movement we more generally find in over-the-crib mobiles meant to stimulate babies.

We open with Smurfette (the voice of Demi Lovato) desperately trying discover her "purpose" as the sole woman in a world full of men named things like Brainy, Clumsy and Hefty (they're literally one-note characters, defined solely by their names). Smurfette wonders what "-ette" means, but of course we already know. Her femaleness is her defining characteristic, and within very narrow constraints of femaleness at that: She is blonde and pretty and "nice."

An escapade to the castle of Gargamel (Rainn Wilson), wherein Smurfette ends up a damsel in distress who needs rescuing, results in the discovery of a map that leads to a legendary lost village of Smurfs. Smurfette, also desperate to redeem her evil origin as a spy (as if it's her fault!), decides that finding this lost village and warning them about Gargamel is her purpose.

So off she tromps into the "Forbidden Forest" (like a certain forbidden fruit?) in her stupid, impractical girly high heels... But I won't reveal what she discovers here, even though it is screamingly obvious. Suffice to say that it raises more questions about the origins of the Smurfs (and why that whole original village was male) than I suspect it's intended to answer, and the conclusions it ultimately comes to regarding Smurfette's identity crisis are enraging. She "can't be defined by just one word," one of the male Smurfs figures. But the male Smurfs can? Not a good message for the little ones. ♦

Smurfs: The Lost Village is not showing in any theaters in the area.