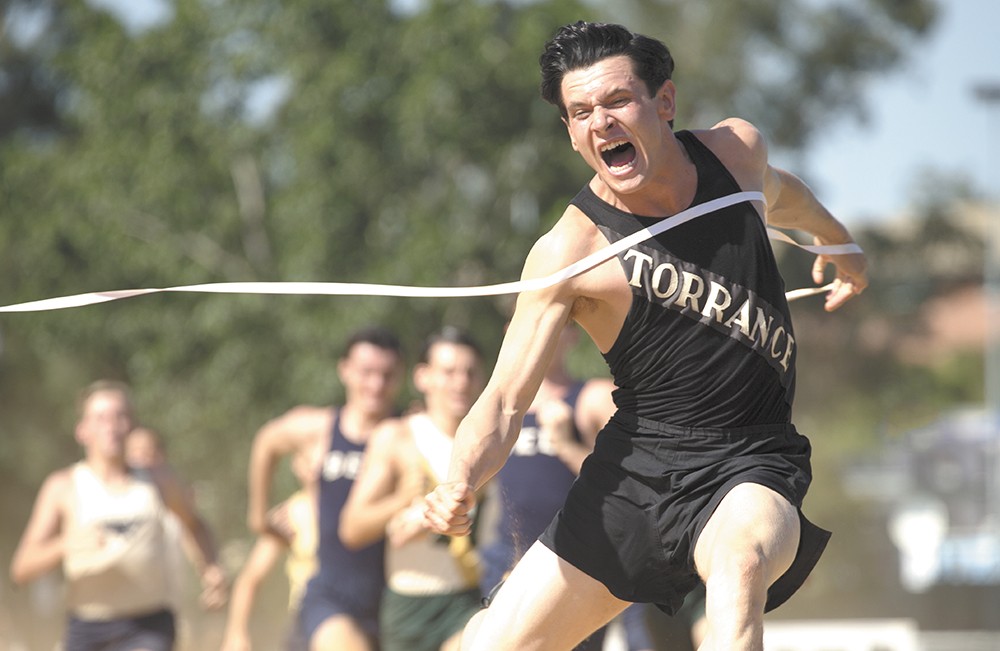 A life story generally doesn't fit a neat dramatic arc; this much is a given. When you're telling the cinematic tale of a real-life person — as Unbroken does with the tale of Louis Zamperini — you're going to be deciding what part of a cradle-to-grave timeline is part of your narrative, and what part isn't. This is artistic license, and if you have a problem with it, then maybe you have a problem with art.

But everyone's going to have a different threshold for what part of that life story is crucial — what makes it a story, rather than just a series of things that happened to a particular person. And this is where Angelina Jolie's adaptation of Laura Hillenbrand's book feels incredibly ill-conceived. As full of thrilling, harrowing, unbelievable actual events as it may be, it's based on a choice that just doesn't make dramatic sense.

The film opens with Zamperini (Jack O'Connell) serving as a bombardier during World War II, on a mission that costs some of the members of his plane's crew their lives. From there it flashes back to the life Zamperini left for war — the son of Italian immigrants in California with a pugnacious, troublemaking streak that got him into hot water but also served him well in his determined drive towards excellence as a long-distance runner and eventual medal-winner at the 1936 Berlin Olympics. Ultimately, the story takes us to the hardships Zamperini endures during the war: stranded for more than a month on a raft at sea after his plane goes down, then faced with two and a half years as a prisoner of war in Japanese camps.

Everything about the pre-war segments feels purely functional, but Jolie finds her footing in the wartime sequences. There's a crisp, unfussy physicality to the dogfight scenes in which Zamperini's plane is peppered with Japanese gunfire; it's easy to feel that the craft is practically disintegrating around the crew members as they try to make it to land. There's a similar intensity to the scenes of Zamperini and his two fellow crewmen, Russell Phillips (Domhnall Gleeson) and Francis McNamara (Finn Wittrock), attempting to survive at sea, fending off both physical threats and their own despair.

Then Zamperini is found by the Japanese, and it becomes a far more conventional POW drama. Some of its attempts at emotionally wrenching moments — like Zamperini naked and facing what he believes is imminent death — feel cribbed from movies like Schindler's List, and there's little attempt to get inside Zamperini's head as he faces an escalating series of physical torments, and the possibility of avoiding those torments if he's willing to become a propaganda tool. The most compelling relationship is the one that evolves between Zamperini and the sociopathic camp commander Mutsushiro "The Bird" Watanabe, with Myavi Ishihara turning in a chilling portrait of unrestrained power and madness.

But that relationship — like all of Unbroken — virtually demands some kind of resolution, and it's here that the film loses its bearings. Once Zamperini returns home at the end of the war — spoiler alert: Unbroken is about a survivor — the film simply cuts to title cards explaining that he suffered from years of post-traumatic stress before attempting to find peace by meeting and forgiving those who had wronged him during the war. And that's a crucial element of Zamperini's story: His ultimate victory wasn't just about getting back to the good old U. S. of A. in one piece, but learning what it took to come out psychologically whole as well. Jolie and her screenwriting team — talented folks like the Coen brothers, William Nicholson and Richard LaGravenese — are clearly uninterested in that part of the story. As far as they're concerned, Fat Man and Little Boy send Louis Zamperini off to his happily ever after.

Maybe it's enough for some viewers that Unbroken works well on a purely visceral level, chronicling one determined American soldier's refusal to curl up and die. It's just hard not to find it frustrating when a movie that positions itself as a "triumph of the human spirit" story isn't actually about the triumph of the human spirit. For Jolie and company, the part of Zamperini's story that's about the triumph of his human body appears to be sufficient. ♦

Unbroken is not showing in any theaters in the area.