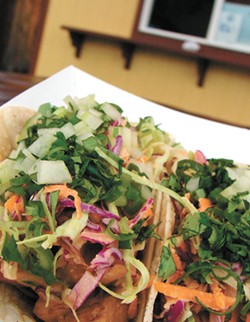 You've got a late-night craving,

but you're torn between something ooey-gooey comforting or crispy-green and healthy. Regardless of your choice, Devil's Lettuce Food Farmacy, a fairly new Coeur d'Alene food stand, has the right medicine for whatever your tummy needs: On one side of the menu, "Heal The Soul" with finger food and sandwiches. The "Feed the Body" menu, meanwhile, offers salads and rice bowls, and will soon add soups.

The Doujaha Dog, for example, is two corn dogs stuffed with jalapeño peppers, sautéed onion, and cream cheese, then drizzled with Sriracha and wasabi aioli ($5.50). The truck's Just a Bowl, meanwhile, is a serving of teriyaki chicken and rice, garnished with sesame seeds and green onions ($6).

Devil's Lettuce's limited menu is in keeping with their modest approach, say owners Larry "Moe" Konsella and Shawna Wallace, who took over the long-shuttered Teriyaki Tiki behind Coeur d'Alene's Corner Bar in 2016.

"We want to start small and grow," says Konsella, who notes that the couple previously went to North Dakota for two years, living in a fifth wheel to save money and plan their food-based venue loan-free.

The place has been a well-kept secret (until now) since it opened almost a year ago, mostly enjoyed by patrons of Corner Bar and nearby Slate Creek Brewing.

"It's a win-win for both of us," says Slate Creek's Mollie Wing, who stopped over recently for a to-go order: Mamma Thai Tacos ($5.50) for herself and burgers ($7) for the kids. Her indulgence? The King Tut burger with secret sauce.

"I don't eat hamburgers that much, so I when I do I want it to be that experience," says Wing.

But what about the name of the place? Isn't "devil's lettuce" slang for a controlled substance not legally permissible in Idaho? Yes, say the owners, but it's also totally memorable and meant to be a reflection of Wallace's coastal California hippie upbringing and the couple's spin on healthy food. They use all organic products and biodegradable serving dishes, for example, will sub tofu for meat, and make their own sauces.

That makes for a menu that reads like cannabis — the Kosher Kush is pastrami, sauerkraut, Swiss cheese and caraway cream cheese rolled into an egg roll and fried ($4) — without any side effects. Being naughty never tasted so good. ♦